I was reminded of these lines of Mahatma Gandhi while conversing with that 16-year-old boy in Pune. The name of that boy is Ayush Bamb. He was narrating to me an interesting snippet about his meeting with Ratan Tata. I was thinking what better achievement one can have than influence a teenager. Ratan Tata is not only the most influential of Indians but he is also among the most influential personalities of the world. But what impresses one most is his natural simplicity that endears him to everyone who meets him.

Now, you listen to this story in Ayush’s words: Around eight years ago, I had gone on a tour to Srinagar along with my brother and parents. The most important aspect of this visit was that we had travelled to Srinagar by our brand new Tata Indigo car which was then recently launched. We were staying at Srinagar’s Intercontinental Hotel. We were having a dinner when my father told me that the tall man sitting at the next table was Ratan Tata and he is the owner of that Tata company that has manufactured Tata Indigo car. I was still uncertain and felt my father was joking. Out of curiosity to know the truth I approached Ratan Tata and asked, “Uncle, did you make Tata Indigo car? He smiled and said, “No, my company has manufactured it”. And then he asked ‘why?. Then I told him that we had travelled to Srinagar from Pune by Tata Indigo car. He was astonished to hear this.

Then he asked me to call my father. He asked my father, “Have you really travelled by Tata Indigo car” When my father replied in the affirmative. He asked another question. “What is your opinion about this car?” Father explained to him how he found the car to be. That time I did not know just how great Ratan Tata was. I was glad that I had met the person whose company had manufactured my car. The next day the hotel manager came and delivered to my father a letter which Ratan Tata had left for us before leaving.

How time flies! I had always kept the memory of meeting Tata fresh in my mind. By sheer coincidence, I was having a dinner at Taj Palace on April 18 this year and just then I sighted Ratan Tata having a dinner with his two guests at the next table. I finished my dinner and approached him. I asked him whether I could have a talk with him for a few minutes. He stood up respectfully and said, ‘Oh yes, sure!’ I reminded him of that meeting at Srinagar and he smiled. He remembered everything. I told him that the family still used Tata car. He expressed happiness and asked me whether I lived in Mumbai. I told him, ‘No uncle, I live in Pune’. He gave me his mobile number and told me to call him next time I came to Mumbai. After this brief interaction, I came out of the hotel and was waiting for my car. Just then Ratan Tata came out with his guests. After bidding goodbye to his guests, he came up to me and said, “If you find my mobile phone switched off, leave a message and I will call you back”. Then he headed for his Honda Civic car and drove off. After some time, I sent him a text message ‘Ayush Bamb, the boy who had met you at Srinagar.’

The next day I had a call from Ratan Tata when I was in the classroom. I missed the call and after my class was over, called him back, ‘Sorry uncle, I could not take your call as I was having my class. Please tell me when I can call you. Next day I had a call from him and as I received the call, I heard the voice from the other end, ‘Finally, connected’. ‘Yes, uncle’, I replied. For a few moments I was speechless, I was puzzled what to say. Then he started the conversation, “That day you came to meet me. I was very glad. I felt honoured that you use the Tata car even now. When you come to Mumbai next time, call me or if I come to Pune, I will call you. You have my number. Keep in touch!’ Happiness suffused the face of Piyush Bamb as he narrated the story. He had finished his story of meeting Ratan Tata and I was engrossed in thoughts.

I was thinking what a difference an amalgam of simplicity and naturalness can make to a personality. Material and economic prosperity does not make anyone great. For achieving greatness you have to have proportionate intellectual and emotional quotient. Materially speaking, neither Bapu, nor Gurudev Rabindranath Tagore or Mother Teresa was rich, yet they possessed simplicity of character and naturalness which only truly great persons possess. At personal level I often get to meet people who are moneyed as well as those who are intellectually rich. I have marked that those who became egoists on account of material prosperity do not command any respect from the common man. Personally, I know Ratan Tata. He is a unique person who is known for his simplicity and friendliness. These qualities make him an inspirational personality. May I tell one more thing? I also have Ratan Tata’s dream car: Nano. Whenever I ride that car I think of the determination of this great industrialist to make car an affordable vehicle for every middle-class household. 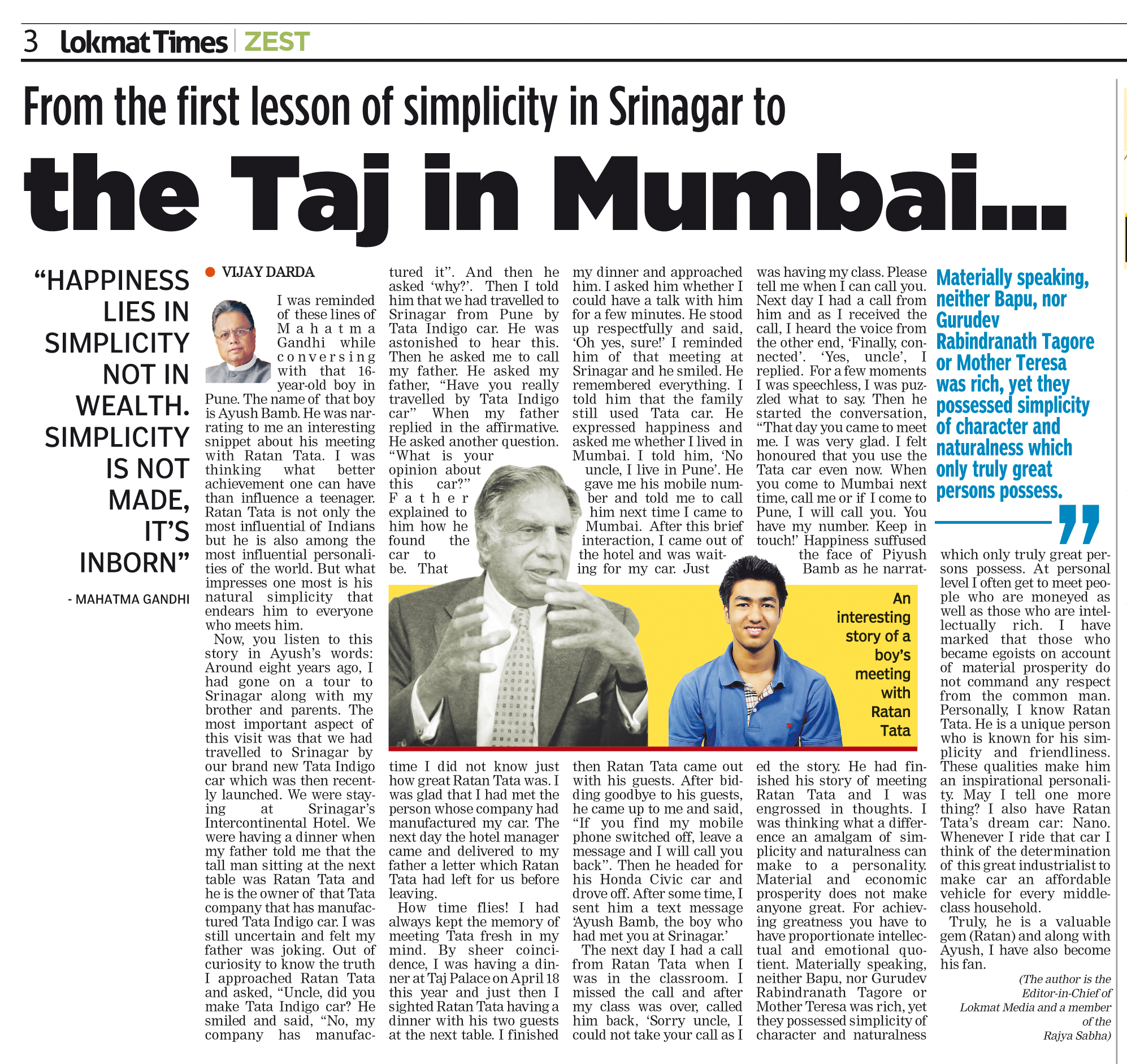 Turmoil in house of Tatas

We worship Bapu but why don’t we follow his path?

Consumer at mercy of big business