That we are a cricket crazy nation, and the game is our only secular religion need not be over-emphasised. This is something that is internalised by the millions of fans who have imbibed all the nuances of the game from the live coverage and bi-lingual commentary that beams into the remotest corners of the country. The game itself may have been invented by the Englishman, but now it is an Indian property. So, there is a certain amount of sorrow about our team’s semi-final loss to Australia in the World Cup at Sydney last week.

But the sorrow apart from being a loyal fan’s genuine heartfelt pain has to be measured against hyped up expectations built on such facile advertising assumptions like ‘we won’t give it back’. An advertisement campaign is not enough to let you retain the World Cup. Such hypes only ensure eyeballs for telecasts. That’s all. The reality is that the Cup belongs to a team only for four years, and after that it is not a question of giving it back, but winning it again. In this instance, we failed to win it, again. So, it is a failure no doubt, but there is no disgrace in it.

Dhoni’s boys served their reputation well by winning seven World Cup games in a row. They achieved this feat travelling over two countries, and in the course of a four months ( just 20 days short of being eligible to apply for citizenship) during which they were at the receiving end for most of time. But the captain himself wants that the loss should be analysed, and his observation that the media should research it and then ” write the complete opposite of whatever you guys decide” shows his laconic sense of humour and an intense grasp of both — the game and the media. The truth is no one who seriously follows the game would have realistically expected India to reach the semi-finals after the harrowing win-less tour of Australia that was partly described as a waste of time by the cricket director Ravi Shastri.

Besides, there was a bit of deception in the seven in a row wins. It created a false of invincibility even though only two games — Pakistan and South Africa — really tested the mental toughness and the cricketing ability of the side. After these two hurdles were crossed, the rest of the league games and even the quarter-final against Bangladesh were just like a walk in the park. Moreover, for the statistically minded cricket followers, there is something like the law of averages. Howsoever consistent a team may be, it has a bad day in office. So, Thursday in Sydney was a bad day for our boys. Look at some figures. In 29 overs — the pace trio-Shami, Yadav and Sharma gave 215 runs. Add to this, the fact that the last six overs produced 70 runs and 27 of these came from 9 balls for Johnson. But this should not undermine the overall quality of their performance.

Indeed, we won most of our games because this trio was effective in taking early wickets. When it came to batting at Sydney the 328 score was always going to be difficult to chase, considering that our highest chase in a World Cup game has been 288 against Zimbabwe. For such a chase to be successful at least one top order batsman has to play the knock of his life, and in our case all the top three-Shikhar, Rohit and Virat fell without making an impact on the game.

But it should be remembered that this is cricket. A Guptil scores a double hundred in one game, and perishes cheaply in the finals for the New Zealanders, now does this mean someone should call that his wife or girl friend’s house should be stoned? Or that he has surrendered? Isn’t there something called cricketing excellence? Don’t we understand that in a one-day game, it is the better team on that day which wins? Or that among the top four teams, the margin of error is very little. All teams have beaten each other and won against each other. But such cricketing logic is alien to all those who have led this stupid anti-Anushka campaign, arguing that this charismatic self-respecting individual is a distraction for Virat. For them, I would like to point out that there is another toddler girl –Ziva — born a week before the World Cup began waiting for her pa Mahi to hold her in his embrace, but then his priority as the India’s captain is to marshal his mental strength and plot the team’s success.

Now, whether it is target Anushka or campaigns like Shame in Sydney, these media manifestations, irrespective of their motives cannot be dismissed as mere aberrations in a society. These are actually symptoms of a much larger and much deeper malaise. It is the shameless search for convenient scapegoats and mute villains. There is a deep seated scorn for excellence in our society. It is almost second nature to find fault with someone who excels. Then again, excellence is not a process with us, it is largely an individual feature. In a systemic way, there is a well-entrenched conspiracy of mediocracy that thrives in our society. So, that is why as a country we are in the bottom heap of most parameters. It is the sustained individual excellence of the players that has put our team among the frontline performers.

For their part, our administrators of the game have left nothing undone to damage the team. If for the sake of argument it is accepted that acclimatisation before the World Cup was the goal, even then there is no logic as to why put the boys were put through such a long tour. But then this is the combo, crush the boys and run high spirited ad campaigns, and then smash the homes of their girlfriends, and shout shame from housetops. Can you really get champions from such an acidic mix of circumstances? Indeed, we should consider ourselves lucky that amidst these negatives we do have some sporting icons like these cricketers, the number one badminton player Saina Nehwal, and Sania Mirza to bring some cheer into our lives.

India’s semi-final loss was a disappointment not just for Indians. It came as a let down even for the New Zealanders. A friend from Auckland, Tim Stewart conveyed his sympathies to me as he was expecting an India-New Zealand final. After all, the New Zealand-Australia rivalry is no less fierce than the India-Pakistan unfriendly engagement. 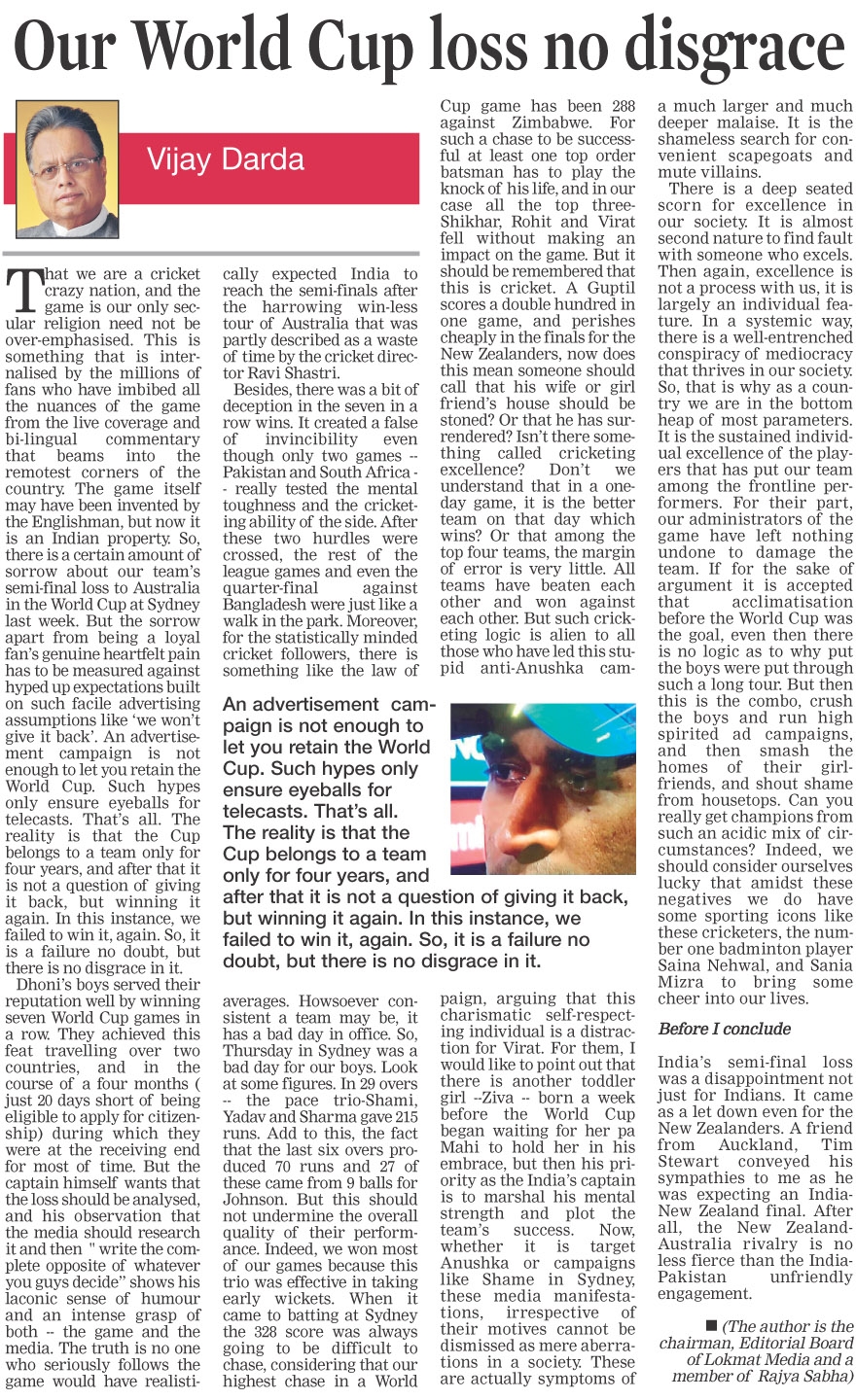