The All India Jain Minority Federation, supported by various trader bodies, organised statewide protests on Wednesday against abduction and subsequent murder of businessman Gautam Hiran, the son of freedom fighter Zumberlal Hiran and a resident of Belapur in Ahmednagar district.

Enraged by the brutal murder of Hiran and failure of the police department to prevent it, the Jain brethren demonstrated in many cities and towns including Mumbai, Pune, Kolhapur, Nashik, Ahmednagar, Aurangabad, Beed, Nanded, Nagpur, Sangli, Satara, Amravati, Akola among others. A large number of Jain community members took part in the protests and handed over a memorandum to the local administrative officers and police officers for prompt action.

They also led a delegation and called on the district police chief Shailesh Balkawade and handed over a memorandum to him.

Later, Lalit Gandhi warned that if strict action is not taken against the culprits of Hiran murder within a week, then their protests will be country-wide.

National president of All India Jain Minority Federation Lalit Gandhi warned that if strict action is not taken against the culprits of Hiran murder within a week, then their protests will be country-wide.

The memorandum submitted to the authorities demanded immediate arrest of the culprits in the Gautam Hiran murder case and a thorough investigation into the case.

A copy of the memorandum has also been sent to national president of Sakal Jain Samaj and former member of Rajya Sabha Vijay Darda urging him to take up the matter with the government. 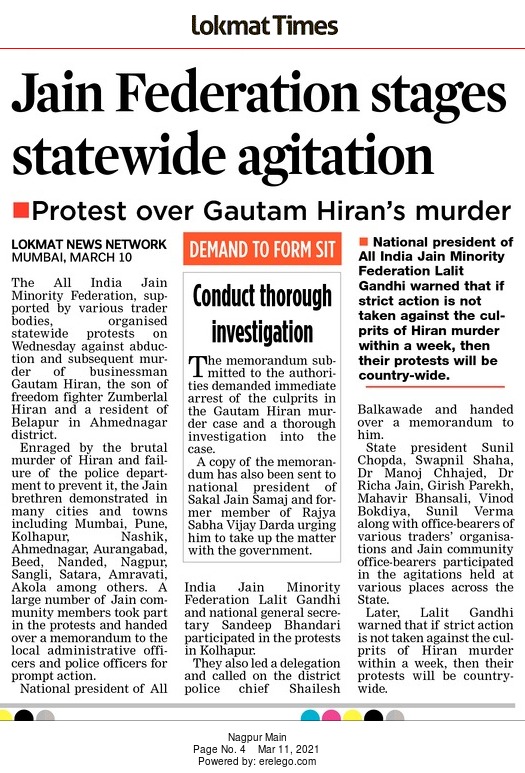 ‘Trace out killers of Hiran, give justice to minority community’