Upset at the delay in justice delivery system, people have now started appreciating the ‘encounter way’ of the police

The anger against the police after the brutal crime of rape and murder of a vet in Hyderabad culminated with killing of the accused in an encounter. It also made the people jubilant to such an extent that they hugged the policemen, showered petals on them and distributed sweets! I have never seen and heard of such affection for the police after an encounter! So what does this public sentiment indicate? The answer is simple. The people are frustrated with the slow judicial system to the extent that they hail the ‘quick action’ of the police.

The question is why should the people not get angry? Why there is so much delay in delivering justice? Nirbhaya case is a befitting example of slow justice delivery system. In December 2012, Nirbhaya was gangraped in a Delhi bus. The incident shook the conscience of the nation. Within nine months, the fast track court sentenced the rapists to death. One of the rapists who was a minor, was released after a three-year sentence. Another died but the remaining four are still alive. The ministry of home affairs has now sent their mercy petition to the President with a request to reject it. Let it be noted that this delay is not a recent phenomenon. In 1990, 14-year-old girl Hetal Parekh from Kolkata was murdered after being raped. It took 13 years for the accused Dhananjay Chatterjee to be hanged. There are many more such examples.

Many laws were changed after the Nirbhaya incident. People were confident that the criminals would be afraid of the law. They will be scared of death, but nothing of the sort happened. The enactment of stringent punishment has failed to instill any fear in the minds of the criminals. One of the recent incidents is that of Unnao where a rape victim was burnt alive. The accused were out on bail. Last year, an attempt was made on the life of the girl who had accused ‘Bahubali’ Kuldeep Singh Sengar from Uttar Pradesh of rape. Her car was hit by a truck and two of her aunts died and a lawyer was injured in the accident. The latest incident took place in Buxar where a girl was burnt alive after rape. Every newspaper published from any part of the country carries at least one news of rape every day. And even when I am writing this column, somewhere in the country some daughter must be falling prey to the rapists.

The latest government data available is for 2017. Ideally, the figure of 2018 should have become public by now, but the delayed publication of figures is nothing new to us. The 2017 figures show that 32,559 cases of rape were registered in the country during the year, which is around 90 cases every day. This does not include the cases in which murder was committed after the rape. This is because while preparing crime data, old rule is followed that the most serious crime should be registered in the same category. For example, if there is a rape and murder, the incident will be counted in the murder category. Statistics also show that after the Nirbhaya incident, the incidence of rape in Delhi alone has increased by more than hundred per cent. When this is happening in the national capital Delhi, just imagine what would be the condition in the rest of the country.

Globally, India is at the 5th position in cases of rape. None of our neighbours figures in the top 10 countries notorious for rape. And this should be attributed to the delay in delivery of justice. It is clear from the 2017 government data that rape cases are hanging fire in the courts. In 2017, about 1,13,600 cases of rape were already pending. Add to it the 32,559 cases of 2017 and the figure reaches 1,46,159. Appallingly, the verdict was passed in only 18,300 cases. Thus, 1,27,859 cases were pending for 2018. Only when the new data comes shall we know what the situation is in 2018 and how many cases are pending.

The question that arises in the minds of people is that if the courts can show promptness to hear political cases on Sunday and many issues have been heard at night, why such a hearing cannot be conducted in dastardly cases like rape so that an immediate decision can be taken! The government should develop such a system that the decision should come immediately and also ensure immediate punishment. You will be surprised to know that 40 rapists have been sentenced to death in Madhya Pradesh, the highest in rape cases, but they have not been hanged yet. If the situation continues like this, how will fear of law be created in the minds of the potential offenders. If we want to stop rape, it is important to create fear in the minds of wannabe criminals. Such a punishment should be given that even those who think of rape should start shivering.

President Ram Nath Kovindji has rightly said that “the accused of rape under the POCSO Act should not be given the right to file mercy petition.” Parliament should definitely consider it. The President is also right that “it is the responsibility of every parent to teach their sons to respect women.” Needless to say that the teaching of values starts at home and it is the duty of the parents to instill right values in their children. The news of the encounter of the four accused of rape and murder, evoked the response that it was good that they were killed! Actually, it is an expression of anger that has remained buried in the minds of people for years due to the delay in the process of justice. 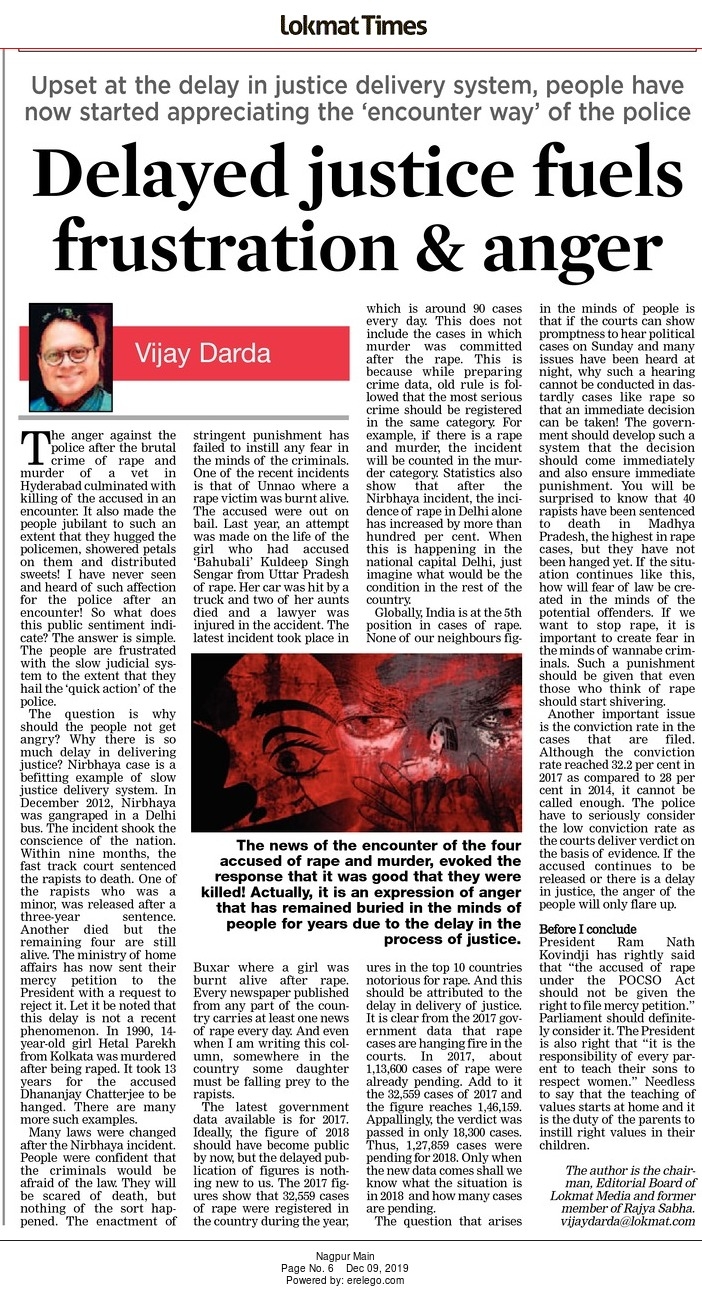