PM did not meet Xi Jinping and Shahbaz Sharif at the Shanghai Cooperation Organisation meeting, and did not hug Putin either

China had deployed a cunning strategy to outwit India but it could not succeed. The masters of Indian diplomacy did not allow his wish to be fulfilled. You will be surprised to know that Chinese President Xi Jinping wanted some pictures, some videos to be made having handshakes or exchanging smiles with Indian Prime Minister Narendra Modi at the Shanghai Cooperation Organisation meeting. The question is, why?

Prior to delving into this question, it is important to know what this Shanghai Cooperation Organisation is. Earlier, the name of this organisation was Shanghai-5 and Kazakhstan, China, Kyrgyzstan, Russia, and Tajikistan were its members. After Uzbekistan joined the organisation in 2001, its name was changed to Shanghai Cooperation Organisation. In 2017, India and Pakistan joined it too. The objectives of this organisation include increasing cooperation in the fields of education, energy, transportation, tourism, and environmental protection, as well as peace and security. But quite strangely, China itself remains the biggest threat to the security of others.

So let us now examine what was China’s ploy in this Shanghai Cooperation Organisation summit. Remember that after a long standoff with China in Doklam, suddenly the matter was resolved. In fact, China was hosting the BRICS summit at that time and it wanted Prime Minister Narendra Modi to attend it. China did exactly the same trick this time as well. The Shanghai Cooperation Organisation summit was going to be held in Samarkand on September 15 and 16, and on September 9, the news suddenly came out that the armies of both the countries had agreed to retreat from Patrol Point 15 in Ladakh during the meeting of Indian and Chinese commanders. It was also assured that soldiers would retreat in just three days. Just imagine, how China, which was not ready to back down even an inch after dozens of meetings, agreed to withdraw all of a sudden. It did not take long for the masters of Indian diplomacy to understand that this is a Chinese design to lure India into its trap. It took this step so that Prime Minister Narendra Modi would agree to meet Chinese President Xi Jinping in Samarkand. There will be smiling pictures of both, videos will be recorded. After that, China will be able to show the world that despite all kinds of controversies and tensions, its relations with India are fine. China has been constantly worried about why India is a member of the Quad, an organisation consisting of India, America, Australia and Japan. On one hand, China tries to browbeat India and on the other, it wants smiles too so that the new friends of India can be betrayed.

If you look at the current situation in the world, one thing is clear that there has been an increase in resentment towards China in the whole world. Stridency is also visible in America’s stance regarding Taiwan. The reality is that China has acquired the image of a villain through its actions. China has trapped 42 countries including Sri Lanka and Pakistan in its debt trap. It is encroaching upon the resources of the debt-ridden countries. On the contrary, India’s image is shining in the world under the leadership of Narendra Modi. India has all the possibilities of becoming a powerful country. China understands this, so it keeps trying to deceive India and create confusion. It knows that this India is not the India of 1962, so it cannot even think of attacking! Cheating is the only suitable way for it!

Our Prime Minister fathomed this gameplan of China, thus ruling out the possibility of any meeting with Xi Jinping. China’s hopes were dashed. Besides, China or even Russian President Vladimir Putin did not anticipate the frank stance that Modiji took on the current global problems. Pakistan’s Prime Minister Shahbaz Sharif was also there but there was no question of meeting him at all. During the Shanghai Cooperation Organisation’s summit, the Prime Minister not only lambasted Pakistan and China but also clearly told Putin in their meeting that this is not the time for war. At a time when China is fully supporting Russia in its attack on Ukraine, the clear disapproval of Russian warmongering by Modiji is also a significant message for Putin. This message of Modiji is also being discussed in the media around the world. It is also worth noting that whenever Modiji has met Putin, both the leaders have displayed great warmth. They also hugged each other. But this time, they did not hug and only talked. Is this a mere coincidence or is it India’s diplomacy to avoid hugging a President who has attacked a small country!

However, the Chinese game has failed and China must be seething with anger, preparing to execute the next deceptive move. We need to be careful! 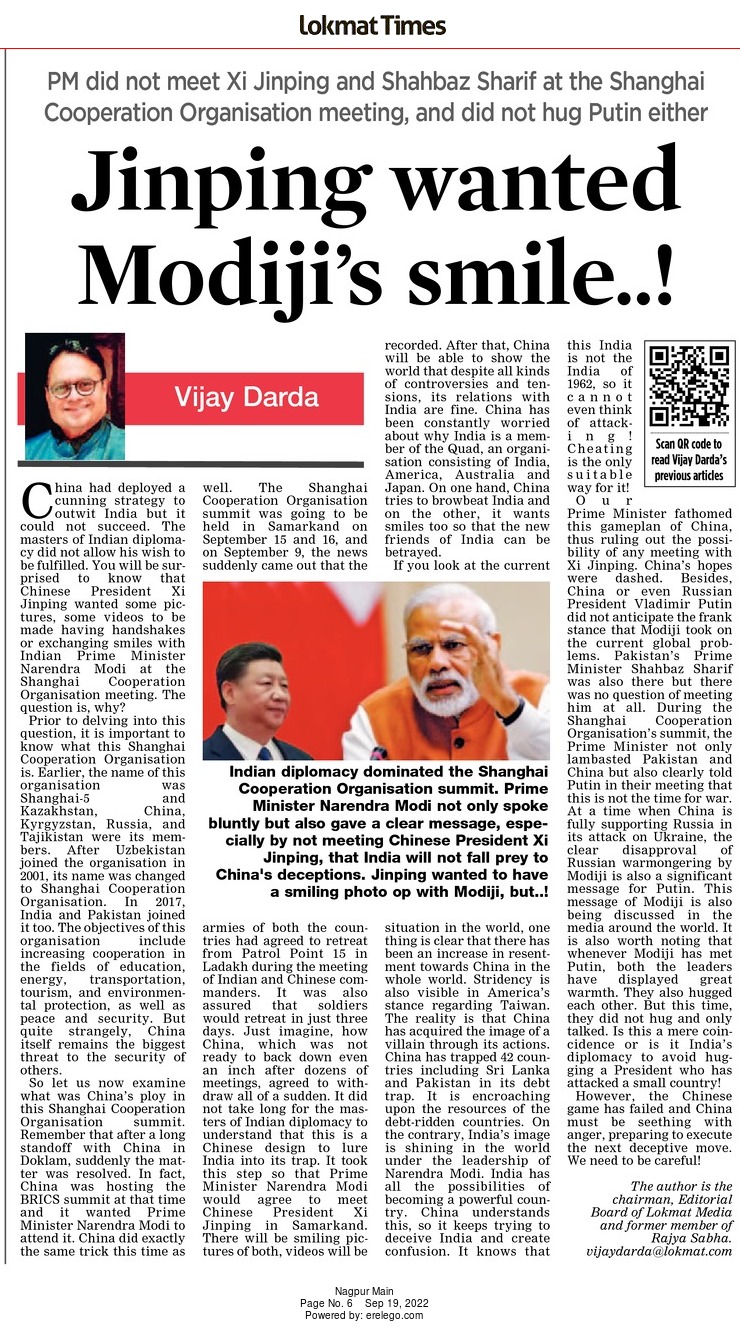 World is astonished by India’s assertiveness!

India will have to be more alert against China