In April 2013, when Chief Justice P Sathasivam ordered the quashing of the second FIR against Amit Shah in the Tulsiram Prajapati case nobody could have predicted that he had a ‘deal’ with the BJP. Indeed, at that time the Modi campaign had not even started, so the question of some kind of reward for this favourable order could also not have been possible in the realm of fiction. Yet, the learned judge has now become suspect of having done a ‘deal’ after he accepted the post of governor in Kerala. It is quite normal for the government of the day to make tempting offers.

The message to the judiciary is loud and clear. If you do something that is favourable for us even post facto then glittering awards await you. So, better watch your decisions, as we are also keeping a tab. Now, judge Sathasivam did nothing wrong in his capacity as a judge, but by accepting governorship, he delivered a body blow to the credibility of the judiciary. Coming on top of the tales we are getting to hear about the collegium system, this hardly does any credit to that institution of last resort that is held in high esteem by everyone.

Indeed, he had the option of enhancing its reputation by quite a few notches, had he simply refused the offer of governorship. But then he did nothing of the sort, and his order on Amit Shah starts looking suspect, post-facto. However, full credit to the Modi sarkaar for playing such a master stroke. It only confirms that irrespective of all high ideological or moral posturing, in the end a Chief Justice of the Supreme Court also belongs to the category of fallible human beings.

Prime Minister Narendra Modi has been described as a great event manager, by none other than his now discarded political patron Lal Krishna Advani. So, the huge success of his Teachers’ Day programme was guaranteed right from the time the idea was conceived. Actually, he did falter by allowing the babus to issue those controversial guidelines for the schools making the event mandatory and then stepping back to the voluntary mode. The mere announcement of the programme would have ensured that eyeballs flock to television sets. After all, his popularity ratings are quite high. But let us leave that controversy bit aside, and it emerges that the Prime Minister engaged with the students in an impressively informal way, and his lessons for the teachers are also significant.

Modi’s emulation of our first Prime Minister Pandit Jawaharlal Nehru in being friendly with the students also shows his secret admiration of the ways followed by that great visionary leader, although he scarcely misses any opportunity to debunk his ideas. So, is Chacha Modi in the offing after Chacha Nehru? But then the education sector is in urgent need of action from the prime minister beyond the sage words of elderly maternal and paternal advice on conserving water and electricity in our homes. Modi would have walked the talk only if the next year’s Union Budget has higher allocations for the education sector up from the 4.2 percent of the UPA era.

Perhaps, only then would the teachers be in a position to imbibe his lessons that no student should be neglected. Only then would his dream that everyone’s talent needs an opportunity to flower would be realised. Otherwise, he would remain a leader who is an effective seller of dreams unrealised. The more important point being that India cannot afford unrealised dreams. Our people have staked a lot on these dreams, and their collective disappointment would be too much to bear.

Trouble in the neighbourhood

It is a sorry spectacle. Three elements — the government, the Opposition and the army — engaged in a manipulative struggle for power, whereas the ordinary folks are left to suffer their plight in complete helplessness. One wonders if all the three elements ever pause to reflect on this aspect amidst their ‘all or nothing’ struggle for power. In Pakistan, the army has always thrived on the incompetence of the politicians, and it was expected that at least now after a succession of experiences with the autocratic dictatorial army rule, all politicians would at least agree on one thing — no more army rule. But that does not seem to be the case.

Nor does the army realise that it is not the best thing for the country in civilian matters. Our neighbour has often been referred to as a failed state, and if there is one common malady that conspires to create this situation, then it is the collective failure of these three elements to give democracy a chance. Granted that Mian Nawaz Sharif is not leading a perfect government, but then getting down on streets with thousands of supporters and paralysing him with the covert support of the army as Imran Khan seems to be relishing is hardly the way to creating a successful democratic order. The tragedy is that as individuals our Pakistani neighbours appear to be perfectly talented to work the democratic system to their advantage, but then collectively they seem to lack the chemistry that produces the success magic. The citizens badly deserve the opportunity to realise their innate ability to succeed. The leaders are failing them, and this is abundant cause for despair, even for us. We cannot afford a failed Pakistani state.

It is in an absolutely different political environment that closer home our people would be electing a new state government within the next few weeks when elections to the Maharashtra state legislative assembly take place. They have been enthusiastic participants in a smooth change of government just a few months ago, and that hangover persists. The winners basking in the glory of that undiluted triumph, and the losers stunned by the magnitude of the loss still struggling to gather their wits. But we all know that an overarching atmosphere is just one of the key elements that determines the outcome of the elections. There are a whole lot of details — like the campaign, the leader, and then the individual candidates in fray that decide the outcome at the constituency. These individual constituency outcomes then do merge to create the integral whole.

At this stage, there are a lot of indeterminate variables, and these shall crystallise in the days to come for the voters to make their final choice. The internal equations between the two sides –the Congress-NCP, on the one side and the Shiv Sena-BJP on the other is one such variable. However, for the Congress- NCP combine there is one major factor and this is the 15-year long rule. Can this combine defy the odds and put up a surprisingly winning performance again? That too when anti-incumbency is not the only disadvantage it suffers from. But whatever is the outcome, we can be sure that the common man would choose wisely in the interest of the state. The beauty of our democracy is that even if the leaders fail the people, the people are able to rescue the situation. 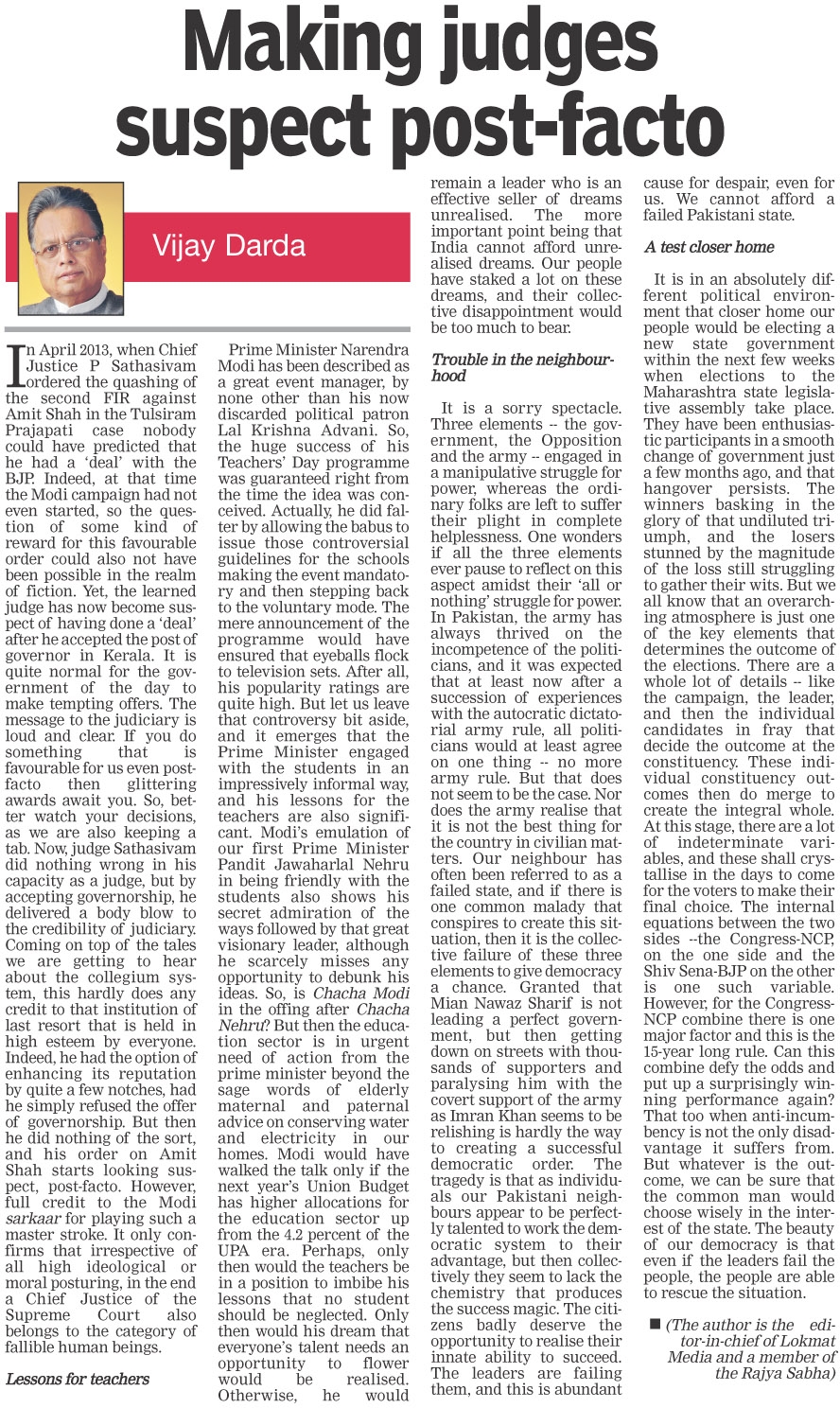 What brings Karnans in judicial system?