I have to admit that this Independence Day we did not acquit ourselves with the dignity that is demanded by the sanctity of the occasion. We as a nation collectively forget that our freedom from the colonial rule and imperial dominance of centuries came at a great price. We seem to be taking this freedom for granted and thus keep on frittering it away in a careless manner.

Everywhere in the world, the people gather together on their national days and celebrate it with visible gusto and pleasure. The people have an enveloping mood of gaiety. But we seem to be revelling in our national pastime of running down our own country. I refuse to accept that this is a democratic right that can be exercised by anyone at his time of choosing. If there is a natural expectation that the sanctity of the day cannot be compromised by indulging in partisan politics, then we cannot condone it by arguing that a new norm in political discourse is being set by a leader who claims to be wanting a break from the past.

Let us recall that the first Independence Day was marked by a stirring call by Pandit Jawaharlal Nehru who reminded that India awakes to freedom at the stroke of midnight and with a promise to wipe every tear from every eye. Let us also ask ourselves as to whether this objective has been achieved, so that we can indulge in politics as usual on this solemn day. It is not just a question of behavioural norms. It is matter of endorsing a political culture that puts partisan goals above national interests. After all there is no bar on indulging in this kind of political slug-fests for the rest of 364 days in the year.

Perhaps we could even have tolerated the aberrations coming from one person, (although matters of national pride and dignity cannot have any exceptions) but the problem has been revealed in its entirety with an endorsement from several prominent opinion makers and party spokespersons. Likewise, the critics too have not covered themselves with glory by joining the battle. To reduce an occasion like the Independence Day into a tu-tu-main-main type of fracas only demonstrates a collective failure.

India like most other nations in these critical times is facing a complex set of problems. Is it too much to expect that our chief ministers and political leaders will set aside their differences for one day and speak in one voice. Is it too much to expect that all political parties can sink their differences on the I-Day and at least commit themselves to the common goal of eradicating poverty, hunger, unemployment and work towards strengthening national security.

There is nothing unusual about this expectation and we have seen that there has been a continuity in major policy matters — economy, defence, strategic and foreign affairs — under different prime ministers. Indeed, both prime ministers Dr Manmohan Singh and Atal Behari Vajpayee have followed the same policies in these matters. Can anyone argue that Vajpayee reversed the policies of economic liberalisation that were first initiated in 1991 by the Narasimha Rao-Manmohan Singh combine merely because he belonged to a different political party. He understood and appreciated the fact that running down our own country’s leadership does not help the national cause.

Senior leaders like Jaswant Singh and Arun Jaitley have often displayed this level of maturity when speaking in Parliament on such key issues. They have always put the national interest above everything else, even while being critical of the government. It is not such a difficult task to merge the two tasks of speaking in the national interest and criticising the government.

But to my mind the problem is not with the politicians alone. Even at the level of ordinary citizens there is a marked indifference to the act of public expressions of the national spirit. When the cricket team wins the World Cup we do erupt into a mood of national celebration. But then in other occasions we seem to be giving this mood a go by. The stray comments by ministers on the sacrifice of the jawans also indicate a mindset that sets a very low value on the national cause. Looking upon the soldiers “as paid employees” who know that they can die while answering the call of duty is simply not the way of looking at young men who guard our freedom. It shows that we either do not treasure our freedom or are convinced that it can be had easily.

In the right spirit of freedom and its essence we need to raise the level of our public discourse and behaviour. The concept of freedom entails a built-in responsibility. The incessant targeting of the government and this all prevalent mood of an adversarial relationship without either the appreciation of the challenges and its successes either by the media or the Opposition undermines the national image. It also ignores the reality that such criticism also makes the country an unattractive investment destination for the global investors. This is not to suggest that there are no failings in the working of the government or that things cannot be done in a better way. It is only to point out that a holistic view of the situation needs to be taken.

For the last few years we have been witnessing a confrontation between not just the government and the Opposition but also with the various institutions. There is no bar against promoting accountability but we cannot be working in such an atmosphere. The defence establishment is well-known to have been handicapped by what is commonly known as the Bofors syndrome. Decision makers simply refuse to take decisions as they are afraid that they would have to suffer the consequences in retrospect. We in the media know that the damage once done to a reputation cannot be undone.

The same thing happens to an economy. Confidence once shattered takes a long time to be built. There may not be any direct link between respect for freedom and the strength of our national economy, but let us say that the two are intertwined in so far as a healthy regard for the nation’s future is concerned. We have been sadly deficient in this regard and it showed in full measure during this Independence Day. 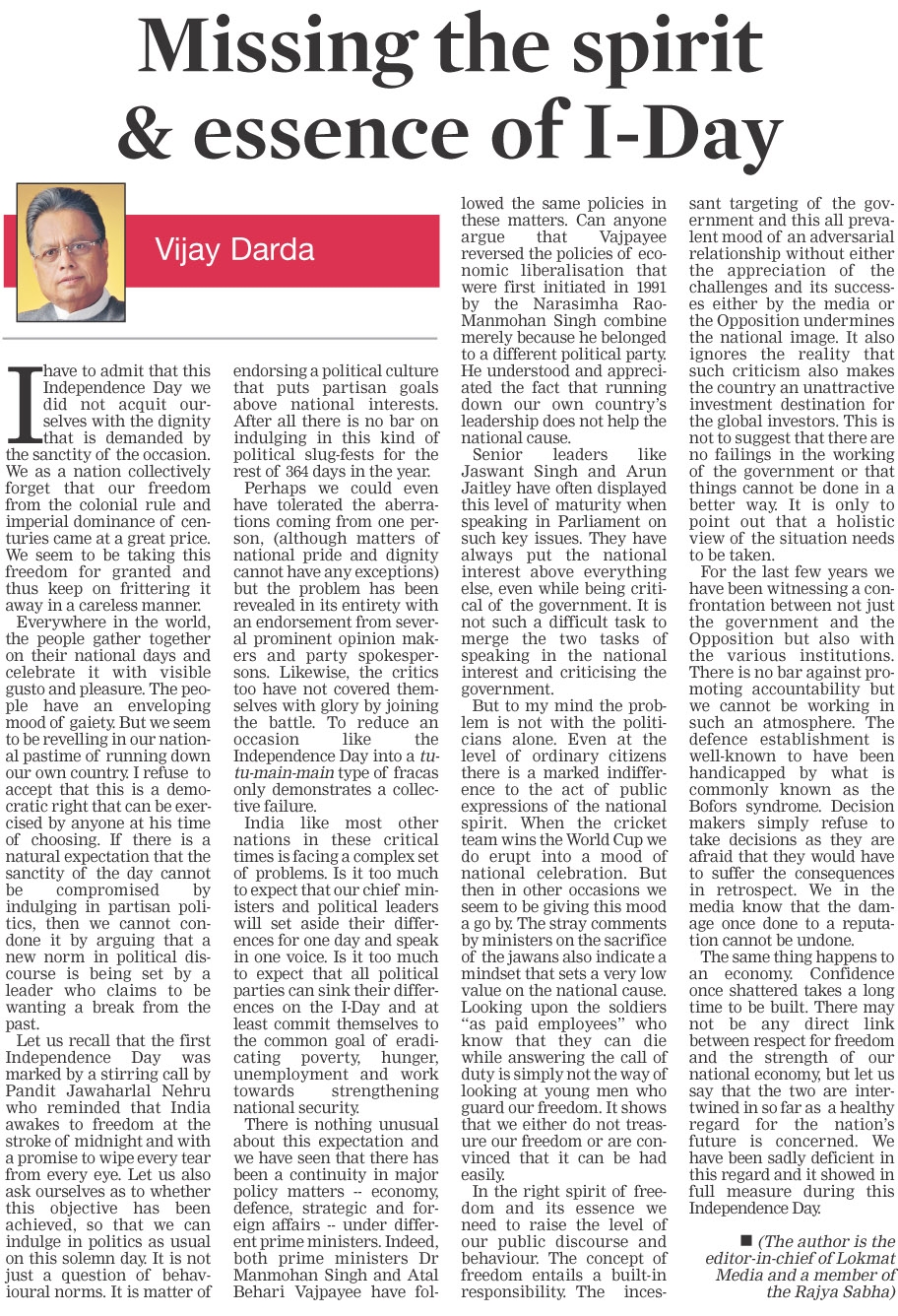 Have we really got complete freedom?

Peshawar massacre won’t be the last