Some shouted the slogan ‘Jai Shri Ram’ while some others shouted ‘Allahu Akbar’ during the oath taking ceremony of MPs!

Parliamentary democracy has its own dignity and no one can be allowed to tamper with this dignity or hurt it in any way. Whatever be the direction of politics, maintaining the dignity of Parliament becomes a collective responsibility of political parties and MPs. Obviously, in the 17th Lok Sabha, the manner in which religious slogans were raised during the swearing-in ceremony of MPs is indeed a matter of serious concern for the entire country. The Parliament has already been turned into political amphitheatre; will it be turned into religious amphitheatre as well?

The moot question is why did some of the BJP MPs raise the slogan ‘Jai Shri Ram’ when the AIMIM MP Asaduddin Owaisi and elected members of Trinamool Congress (TMC) walked to the podium to take oath? Was this a deliberate move? Let’s assume that it was not intentional, yet it is clear that it was done to tease the elected representatives of Mamata Banerjee and Owaisi! Mamata tweeted that a religious slogan is being politically used. In response, her party representatives chanted ‘Jai Kali Maa’ while Owaisi raised the slogan ‘Allahu Akbar’!

It can be said that they mounted a counter-attack. But I believe all of them have done the wrong thing. All of them seriously hurt the dignity of Parliament. Will we now get to see such a scene every now and then in Parliament? This is possible because the elections for the 17th Lok Sabha were fully based on Hindu and Muslim identity politics. The storm of polarisation was so strong that it blew up caste politics! When religion itself becomes the basis of election then it is but natural that such people will express religious manifestations in Parliament. Actually what is seen in the Parliament is the mirror reflection of the nation.

I have been a part of parliamentary politics for eighteen years and actively participated in the Parliament proceedings. In these years, I have seen that whenever any member spoke something wrong, the senior members would correct him immediately. Let me give you an example. The then prime minister Atal Bihari Vajpayee was speaking in the House. During his speech, he cited some wrong references. Pranab Mukherjee immediately stopped him and pointed out that this reference is wrong. Atalji said he will speak on this topic tomorrow. Congress members complained to Sonia Gandhi that it was a good opportunity to corner the Prime Minister.

But Soniaji praised Pranab da and said the prime minister belongs to the country, if he gives some wrong references, the country will be defamed in the world! This kind of atmosphere prevailed in the Parliament earlier! It should be the same even now. When MPs were raising slogans, the parliamentary affairs minister should have intervened and reined them in. You may remember that when the Prime Minister Narendra Modi reached the Parliament for the first time, he had kissed the threshold of the Parliament, he had bowed his head before the august House. He is a veteran politician who is conscious of the dignity of Parliament. I am sure he must have reprimanded the errant MPs!

It is a matter of serious concern that even after this incident, nobody has apologised. Neither those raising the slogan of ‘Jai Shri Ram’ nor those who shouted ‘Allahu Akbar’! Should we assume that neither of them wants to keep Indian democracy secular? If this is so, the Indian democracy will keep moving in dangerous direction! We are already witnessing the worst condition of theocratic countries in the world. The country does not make progress based on religion but on the basis of positive politics, scientific thinking and dedication.

All should keep in mind that the Parliament is the highest place for fulfilment of the expectations of common man. He hopes that his elected representatives will work in the Parliament to make his life better. Parliament is the platform for debate on various subjects, to do post-mortem of the policies of the ruling party so that it does not become autocratic. Parliament is actually there to give direction to the country. But unfortunately, the dignity of Parliament is constantly being lowered in the course of time. The killers and rapists are reaching the portals of Parliament. In the 17th Lok Sabha, the BJP has brought to the Parliament an accused of terrorism in Pragya Singh Thakur, who made objectionable comments about Gandhiji. Parliament should consider it too!

There is no harm in saying that all is not well in the country. All parties have to think about how to restore the dignity of Parliament and how to keep our democracy secular. Secularism is our biggest strength. Religious schism will ruin the country. It’s time to exercise utmost care!

It is a matter of extreme regret that as many as 150 children have died of the disease called ‘Encephalitis’ in two weeks for lack of better treatment facilities in the government hospital at Muzaffarpur in Bihar. This is particularly regrettable in a country which is planning to land a man on the Moon and building its own space station. These deaths are a stigma on the nation!

If there is a debate over religion, there would be no objection to someone shouting the slogan of ‘Jai Shri Ram’ or ‘Allahu Akbar’. But the way these slogans are being raised in the Parliament of secular democracy, it is highly objectionable. It must be opposed tooth and nail. 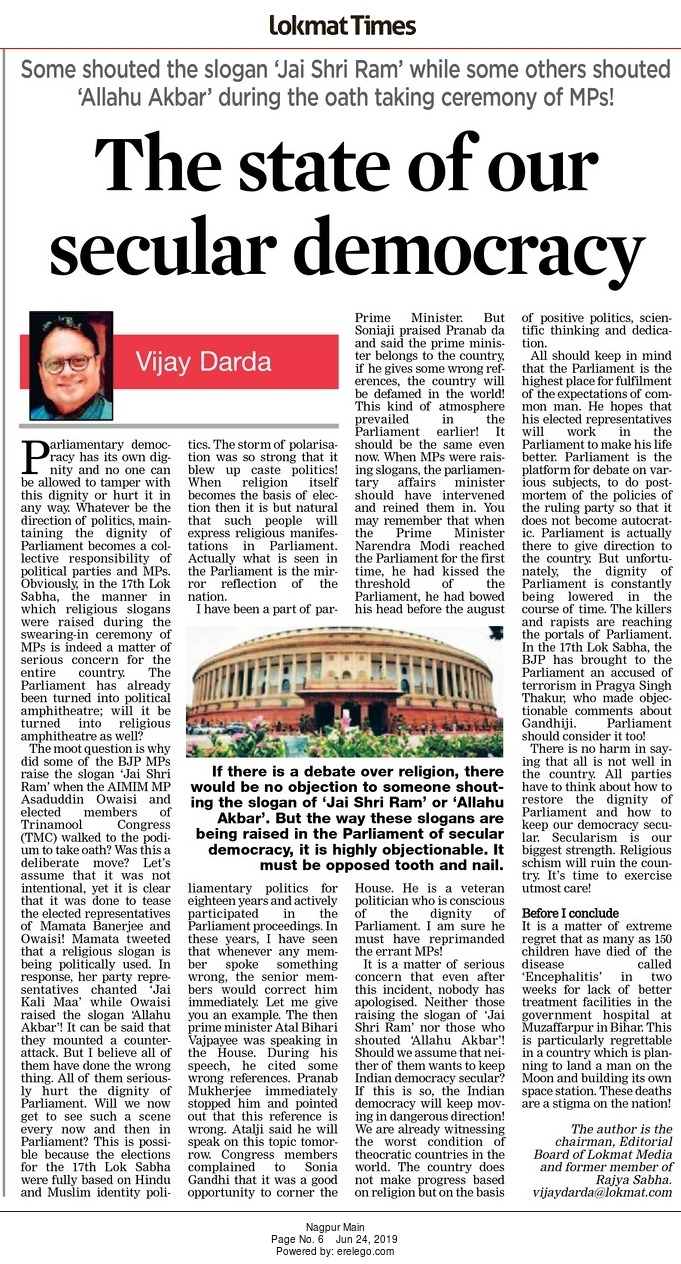