All faith is supposed to be blind. But just as wilfully leading a blind person into a ditch is a crime, similarly among all the emotionally exploitative deeds that are committed in our society, the worst form is the one that can be safely described as the betrayal of faith. Even in this category, the most reprehensible acts are the ones that are guided by the so-called religious ideas. Human history is full of the atrocities that are committed under the guise of religion. Indeed, religion is the cause of most violence and exploitation that goes on in all societies. But matters degenerate further when an element of criminality gets mixed with the opiating impact of religion. However, we must also hasten to add that per se there is nothing more elevating than the spiritual content of religion. It is this element that anchors our morality and thus serves the purpose of granting more than an ordinary meaning to our mundane lives.

Babas, charlatans, mendicants and itinerants in religious looking garbs are all an integral part of our society. They are all tolerated as harmless even if they are ineffectual, and they live off the society. But these are changing times, and everything operates on a scale that it fast becomes a viable commercial enterprise with all the trappings of vested interests and associated criminal activities. So, an itinerant preacher like harmless character that Rampal was in his early days can also outgrow to become a ‘criminal terrorist-man god’ of the type that can defy the force of the state. The fact that he defied the state power for days, and did not surrender himself before the authorities can be taken lightly only at our own peril. He had all the tactics of a terrorist operation at his disposal — huge fire power, ample manpower to hold as human shield, heavy stocks of food, water, and fuel supplies at hand to defy a prolonged siege, and above all trained former policemen, army men and even NSG commandos to manage his affairs. The question that needs to be asked is why would a man-god needs such trappings unless his intent is criminal? Why would he waste his resources on such elements if he had no intention of ever deploying these?

There are no mitigating circumstances for the acts committed by him. In fact right from the word go, the feature ‘fraud’ is writ large on all his activities. It begins with his claims of being an avatar of Sant Kabir or Guru Nanak, then goes to extend to his lifestyle and his so-called preachings. The fact that he attracts followers is beside the point. In our society, where the people are poor, miserable and distraught such ‘preachers’ who have crossed a threshold of popularity will always be propped by vested interests. They would also be supported by powerful patrons who wish to keep such enterprises going, and besides, there is the lure of free food, lodgings and some elementary healthcare at such ashrams.

However, the most important reason for the survival of such elements is the political patronage that they are able to attract at all times. Politicians pay court to babas, and this is their lifeblood. It is a mutually beneficial relationship. The baba gets cover, and the politician gets vote. Even Rampal had his own voter clout, and the fact that he ‘fought against Arya Samaj’ added to it. No less important was the fact that the former Haryana chief minister Bhupinder Singh Hooda is an Arya Samaji. Without dragging partisan politics into the latest episode in Haryana, it needs to be pointed out that the Rashtriya Samaj Sewa Samiti (RSSS) headquartered at Rampal’s Satlok Ashram was formed precisely to fight Hooda’s policemen in the event of their coming to arrest him.

It is not surprising that given their assumption of ‘divine’ powers such babas like Rampal and Asaram have notions that they are above the law of the land. So, when they are faced with situations that require them to surrender before the legal authorities, they resort to all possible means to evade arrest or any such action. They also resort to arguments that they are victims of political vendetta like Asaram and Baba Ramdev who never tire of blaming the Congress president Sonia Gandhi for their ills. But the good news so far is that the law does catch-up with them. True, there appears a semblance of softness at some initial stage, but then ultimately the evasive games gets over for these “Man gods.” This indeed, is the brightest spot among all the dark scenarios of exploitation that goes on at the premises of these charlatans.

This unfortunately is not a societal menace that can be tackled by promulgating laws or imposing some administrative framework. It is actually a long drawn battle against the misuse of religion and faith by individuals. It can come only through mass awareness and spread of knowledge. It is a task that is easier said than done. But this does not imply that the authorities have no role in it. Indeed, if the law enforcement is just by the book, and no leniency is shown to these “man-gods” then the war is won without a shot being fired. Most of them are embroiled in illegal activities that should be curbed without any fear or favour, and that itself would cut down the emotional exploitation riding on the wings of religion.

The Rampal army did not come up overnight, and it is clear that there was lot of state lethargy during the period that it got accumulated. This should be seen as a serious security lapse, and now that we have a pro-active national security adviser in Ajit Doval who is an experienced hand in such matters, it would not be unreasonable to expect that there would be no future Rampal like episodes. Though some partisan voices have claimed that the six deaths in this épisode’ make it a peaceful affair, there can be no denying that even a single innocent death is unacceptable and the situation was indeed very explosive. When ruthless minds like Rampal’s are at work, then there can be no predicting the outer limit of the damage they can cause. The only secure option is to nip them in the bud. 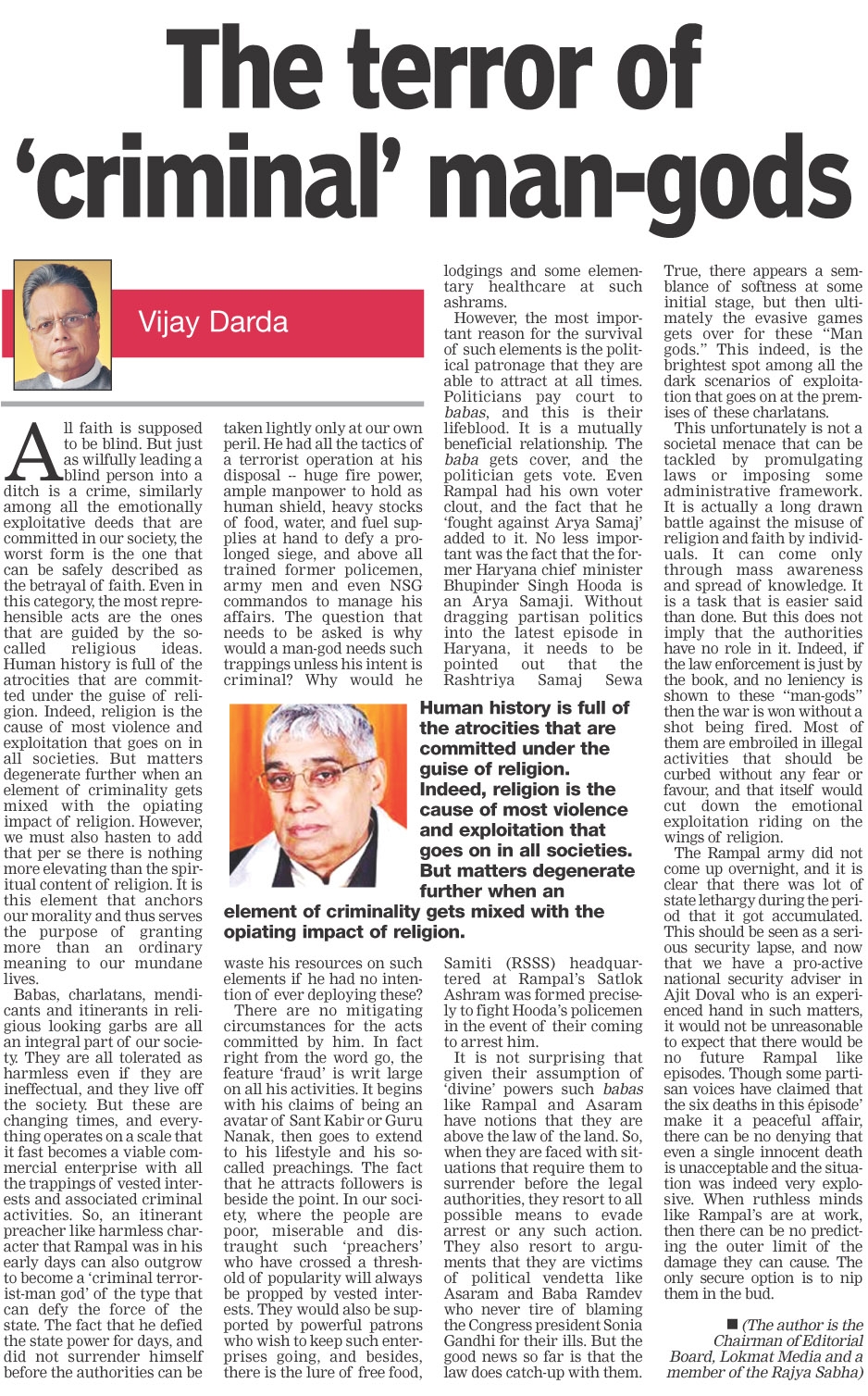 Several other riches are necessary for happy life

‘I have full faith in your sense of justice’