Union finance minister Nirmala Sitharaman has praised the Lokmat Media for felicitating warriors in various fields with Maharashtrian of the Year  Awards during the Corona-triggered lockdown as part of its social responsibilities.

Chairman of the editorial board of Lokmat Media and  former member of Rajya Sabha Vijay Darda and well-known ophthalmologist and Rajya Sabha MP Padma Shri Dr Vikas Mahatme called on finance minister Sitharaman on Wednesday. When Darda invited Sitharaman to be the guest of honour for Lokmat’s Maharashtrian of the Year Awards ceremony, the finance minister showed deep interest in knowing about the various social initiatives being undertaken by the Lokmat group. The finance minister discussed the Union Budget with Darda and Dr Mahatme and also sought their viewpoints.

While informing about the special characteristics of Prime Minister Narendra Modi’s personality, Sitharaman told  Darda about an anecdote. “Whoever wanted to meet PM Modi had to undergo a Corona-test first and only then was allowed to meet him. However, I need not had to undergo Covid-19 tests before meeting PM Modi when I was preparing Union Budget,” she said.

Darda also said the newspaper industry is in a state of disarray due to the fallout of the Corona outbreak and the Central government should give them financial support. 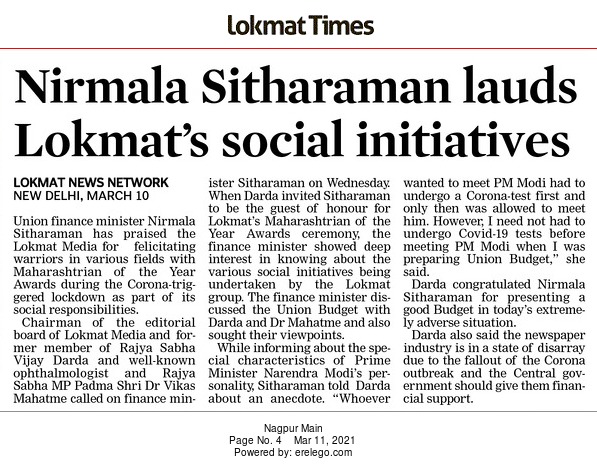