O, Lord Krishna! Why don’t you descend on Earth again?

It was around twelve o’clock midnight. I was awake. My eyes were fixed on the child form of Lord Shri Krishna. The flow of thoughts in my mind refused to cease… so many forms of Lord Krishna… so many divine acts… and hidden in every divine act or play is a wonderful message of the art of living. Truly, there is no one else like Lord Shri Krishna! I was still lost in my thoughts when suddenly, the universe around me resonated with the joyous shouts hailing Lord Krishna: ‘Hathi ghoda palki, jai Kanhaiya lal ki!’

On the night of Janmashtami, I was completely absorbed in Lord Krishna. It is the divinity of Krishna that makes every parent want their child to be like Laddu Gopal (another name for Lord Krishna)! I kept remembering the tales of his childhood mischief, and the sublime verses of Bhagavad Gita kept ringing in my ears. According to the great mathematician Aryabhata, Lord Krishna spent 125 years on this Earth around 5,000 years ago.

Around 35 years after the war of Mahabharata, his mortal body left the Earth for heavenly abode, and from that day Kaliyug started. He may have led 125 years of his physical life, but Shri Krishna is immortal. In Bhagavad Gita, he says that the body is mortal but the soul is immortal. That’s why Shri Krishna is still there in our consciousness and our subconscious mind too! He is the ideal in ethical values. His life is a wonderful story of escaping from death in his childhood and it is also one full of fun and frolic that fills life with joy and happiness. He is the king and the friend of poor Sudama too. Such an example of sense of belonging is rarely seen. So the message is that love, passion and compassion are greater than money and they are for everyone! When he explains dharma in Bhagavad Gita, he talks about humanity and karma. His dharma is for all. There is no caste, no creed, no religion created by man. The essence of his dharma is human beings. Where else is such an example of harmony and unity found?

His childhood was full of fun and liveliness, while his youth was full of social revolutions. On one hand, he crushes Kaliya the serpent and the cruel king Kansa and on the other, he is prepared to sacrifice himself for justice. People believe that he had 16,108 queens but can a person have so many wives? This incident has to be understood through the Holy scriptures. There was a demon called Bhaumasur, who wanted to sacrifice 16,000 girls to attain immortality. Shri Krishna freed all those girls from imprisonment and sent them back to their homes. When those girls reached their homes, society started questioning their character. Following this, Shri Krishna married these girls. This incident shows that Shri Krishna supports and gives strength to the oppressed and weaker sections. While accepting those girls, he did not think about which caste, religion or clan they belonged to and what their status was.

Just imagine what a great message of respect for women Shri Krishna gave by protecting Draupadi 5,000 years ago. Unfortunately, women are being exploited even today. He gave the message of protecting the animals and forests through cows. That is why I consider Lord Krishna as the greatest social revolutionary and the ‘Yugpurush’ of all time.

He exemplified how politics should be. He was well-versed in politics and was also a great scholar of philosophy. He symbolised happiness, sadness, attraction, love and the importance of learning. He is a phenomenal and multi-dimensional personality. To his devotees, he is not only God but also a guru of the highest order. The things he talks about in Bhagavad Gita are simple but equally deep too. Bhagavad Gita is a priceless and wonderful treasure of wisdom. Every great person right from Swami Vivekananda to Mahatma Gandhi and Acharya Vinoba Bhave interpreted Bhagavad Gita. The great philosopher Osho and the great scientist Dr APJ Abdul Kalam were influenced by Bhagavad Gita too. It is not just India but the whole world today sees Bhagavad Gita as a way of life. The British East India Company published an English translation of Bhagavad Gita in 1785. It was translated by Charles Wilkins. After that Bhagavad Gita has been translated into more than 59 languages including French, German, Danish and Chinese.

The most wonderful quality of Lord Krishna is his love for his devotees. He is easily available to his devotees who remember him. He is the ‘Raas Rachaiya’, ‘Makhan Chor’ for the ‘gopis’ of Brij and a charmer! On one hand, he is an ideal king and politician, on the other, he is also a skilled warrior in the form of ‘Sudarshan Chakradhari’. He is the definition of friendship for Sudama and an embodiment of love for Brij. When his flute plays the tune, he looks like a great musician. He is an unmatched symbol of philosophy and art.

As the night progressed, I was wondering whether the celebration alone is the aim of the festival. We should inculcate the values of Lord Krishna within ourselves. If we can do this, we will be able to destroy the tyrannical forms of Kaliyug. Shri Krishna is really needed in today’s environment. Amid all these thoughts, my eyes were getting heavy… and I was thinking… O, Shri Krishna, why don’t you come down to Earth once again? 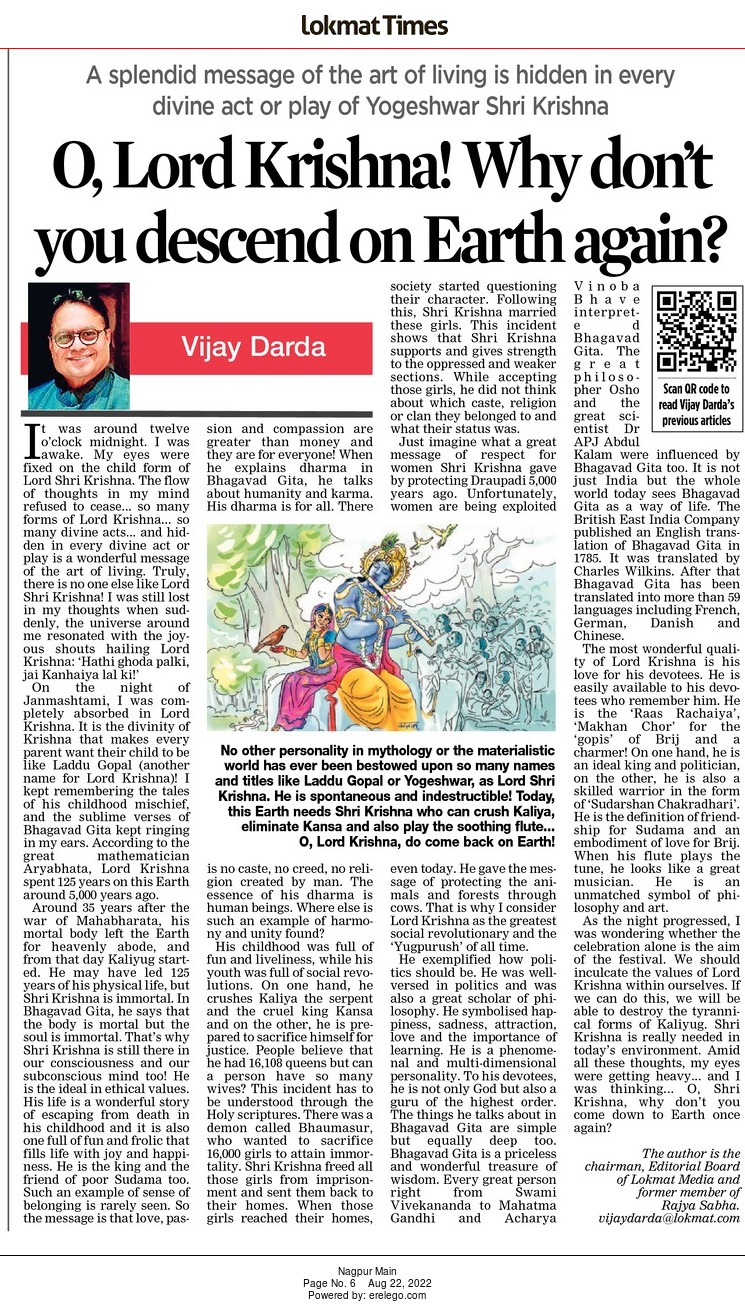 Golden jubilee celebrations of Lokmat start on a sacred note

All round development only can usher in peace in Valley

Sushmaji in Islamabad is fine, but why?