There is a touch of irony in the developments within the BJP. Both the Gujarat chief minister Narendra Modi and the senior patriarch Lal Krishna Advani have built their political careers on an anti-Muslim platform. But curiously the battle of succession between the two has been on lines of the wars between the Mughal rulers. Here is a reluctant aging monarch stalling the succession of his heir apparent, and the young man leaving no stone unturned to dethrone the older ruler. To complete the tale of the power games, the rest of the retinue is divided between the two contenders. The Sangh parivar will not like this analogy a wee bit, but this is the reality that is staring them in the face.

A week is a long time in politics, and now two weeks have passed since Rajnath Singh-RSS-Modi masterminded this coup against Advani in Goa. It is true that after a 24-hour revolt, swayamsewak Advani has adhered to the diktats of the Sarsanghchalak Mohanrao Bhagwat, but who can deny that the scars have not left a deep imprint on their face. Even those who have  disagreed with Advani for a lifetime over his politics, have observed that the aging patriarch deserved a better treatment.

The Sangh parivar never tires from talking about cultural values and the virtues of respecting the elders. Is it the way they want the youngsters to treat their elders? After all, the panic diplomacy that was conducted after the coup, could have been very well practised before it. But then I believe that whatever happened was in the best interest of the nation. Now the people have got the real power behind the BJP. So far when we Congressmen used to say that the RSS is the real power behind the BJP, people used to dismiss this as partisan criticism. But now there is no such doubt. The mask, a favourite campaign prop for Modi as well as the BJP is now off. The BJP from Modi to Advani dances to the tune set by the RSS. Within the last two weeks, we have also got confirmation of the  divisive figure that Modi is in Indian politics. The BJP has lost its ally of  18-years in JD(U). In an era of coalition politics, the BJP has lost a dependable ally, and this has proved Advani’s objections to Modi correct. He is not a  coalition builder like Atalji.

But then the problem is that the BJP has accepted that it does not have any other leader who is more popular than the Gujarat chief minister. Well, there is no harm in accepting this proposition ,but then the question is whether his claim to being a three-term Gujarat chief minister is good enough to catapult him to the prime ministerial chair? After all, the country does not have American style presidential elections, and even in America the states have to be won, and by available evidence Modi is hardly popular in states beyond Gujarat. He did campaign for the party in Karnataka, Himachal Pradesh and Uttarakhand but with little impact.

There is another interesting aspect of the current political discourse that is largely led by the media. Personalities that are built-up by the media are quickly forgotten after a short time span. Now do we really find any mention of Anna Hazare, V K Singh or Arvind Kejriwal? Not so long ago, no front page of any newspaper of the country would be complete without giving them enough prominence. They have all suffered from burn-out phenomena. They do not figure in the 9 pm discussions on any news channel.

This is an election year, and it is going to be a long haul for at least the two major parties-the Congress and the BJP over the coming months. The BJP having put all its eggs in the Modi basket has made an assumption that will be tested severely in the process. Is he good enough for them to get the 200 odd seats (now in the absence of JD(U) the BJP tally has to be higher by at least 20 seats) that will legitimise their claim to form the next government at the centre? No non-Congress leader in the coalition era has ever mustered such a number in the past.

But then the Congress cannot take comfort from the negativity that surrounds Modi’s persona. He has powerful corporate as well media-backers, and the anti-Congress sentiment in the political arena is also quite formidable. It cannot be oblivious of the fact that as the ruling party, it has to provide satisfactory and durable answers to the problems confronting the nation-be they economic, domestic or external. The people are going to judge the Congress on its performance, and whereas the absence of a credible alternative may be a factor in the voting decision of the electorate, it would be perilous to bank on this factor alone.

The Congress also cannot ignore the divisive element in the Modi campaign after all this has been his USP in Gujarat. Indeed, it is the persistent inability of the Congress in Gujarat that has given the BJP and Modi the confidence to take on the UPA at the national stage. A mere drawing room argument that the Gujarat phenomena cannot be repeated at the national level is not enough. The intrinsic political challenge cannot be tackled by merely wishing that it is not a challenge.

It should also be remembered that the UPA has been in office for two-terms and the anti-incumbency phenomena as well as the voter fatigue with a dispensation does set in. This has to be countered with renewed vigour and confidence. Between the two of them, Modi and Advani have already bruised a none too healthy BJP, and the allies have also added to their problems. Besides, the polity does not trust a third front as a viable alternative, after all as Lalu Prasad Yadav put it can there be a national government dependent on the whims of the mercurial Mamata Bannerjee. So, the only alternative is for the Congress to come out with a new and convincing blueprint to win a renewed mandate and carve out a future consistent with the country’s size and strength on the global landscape. 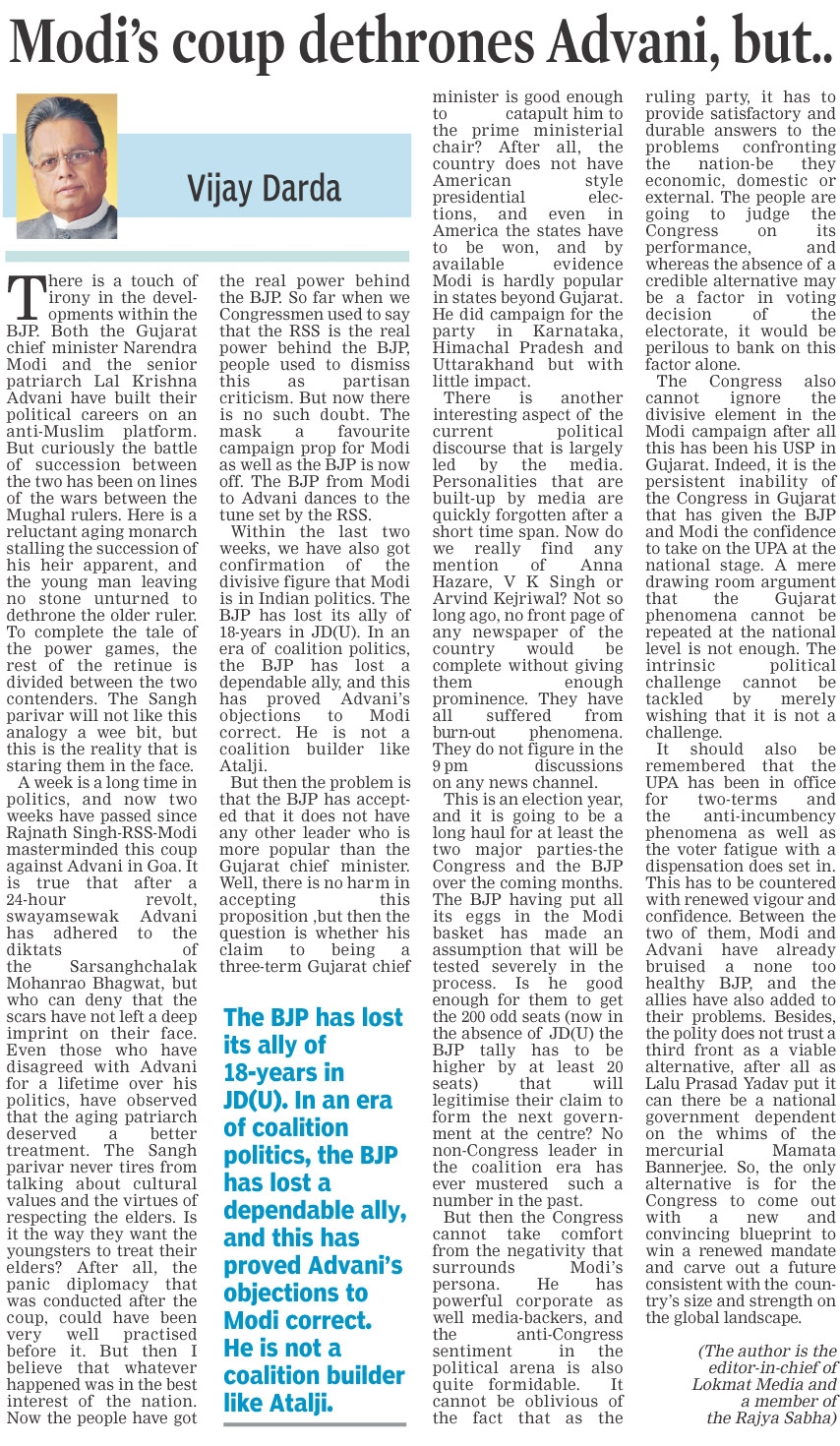