Point out mistakes but highlight good work too

Admitting that the media freedom is paramount, Union minister of sports, youth affairs and information and broadcasting Anurag Thakur thinks that while exercising its right to criticise, the media should also highlight the good work.

Anurag Thakur expressed his views at length during his meeting with the chairman of editorial board of Lokmat Media and former member of Rajya Sabha Vijay Darda in New Delhi.

He expressed happiness that Lokmat’s Nagpur edition is celebrating its golden jubilee year. Lokmat has been number one right from its association with the freedom struggle to the fight for the interests of the common man. He said that he would definitely participate in golden jubilee year programmes of Lokmat.

Thakur also said that while giving me the responsibility of the minister of information and broadcasting, Prime Minister Narendra Modi has clearly told me that media freedom is very important. “I also subscribe to this concept. We are also celebrating the 75th anniversary of independence.”

Anurag Thakur spoke of having had a very close relationship with journalism.

“When I was the president of the Board of Control for Cricket in India, I was very close to journalists. My experience is that journalism of India is very responsible and powerful. There are definitely some people whose language is objectionable.

“Do tell readers where it is going wrong, but the good work that is being done should also find a place in the media. The responsibility of making the country great is not only of the government but also of the common man. I am sure that our journalism will always live up to these criteria.” 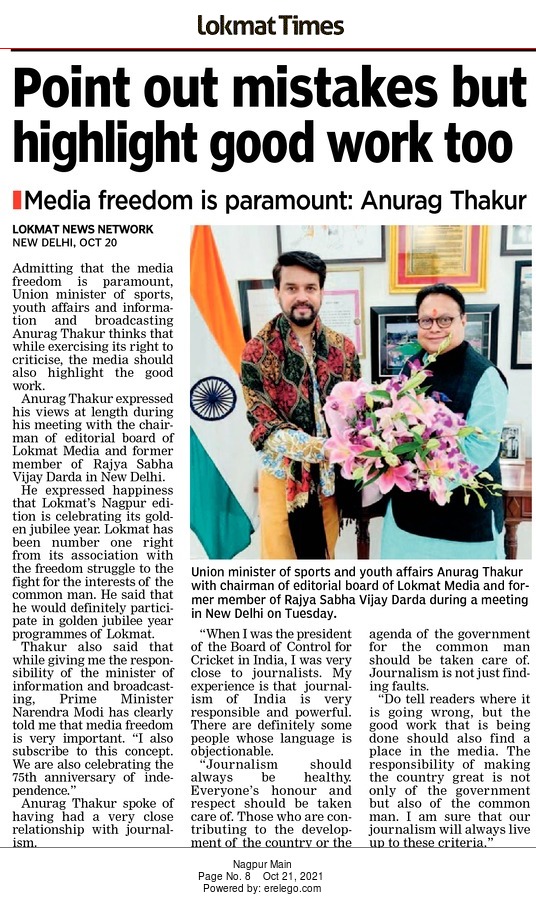