The venomous utterances of terror-accused Pragya Thakur, who contested on the BJP ticket from Bhopal Lok Sabha constituency have shaken the country. At first she insulted Hemant Karkare, who was martyred in the Mumbai terror attack, and now she has declared Nathuram Godse who killed Mahatma Gandhi, to be a ‘deshbhakt’ (patriot). The question arises as to how dare she speak like this? Obviously, she feels that the government shares her thoughts and that it will give her protection. She dares to say this because the Congress and its associates do not speak. Why such an attitude towards the idol who made us free? Pragya Thakur should have been condemned throughout the country; demonstrations should have been staged all over but unfortunately, nothing like this is happening.

Like every countryman, I am also deeply hurt with the senseless statements of Pragya. Pragya may not even know that the person whose killer is being described as a patriot, was the one who was responsible for the liberation of 40 countries of the world, not just India. The assassination of Bapu was not the murder of only one person but it was an attempt to murder Gandhian thought. I remember, in the Central Hall of Parliament, Barack Obama had said that had Mahatma Gandhi not been there, probably he would not have been the President of the United States. The great scientist Albert Einstein had said, “Generations to come, it may well be, will scarce believe that such a man as Gandhi ever in flesh and blood walked upon this Earth.” Such an impressive and great personality Bapu was.

I can not understand as to how anyone can term the killer of Mahatma Gandhi a patriot? And such utter nonsense should not be linked with the freedom of speech at all. Freedom of speech does not mean that you shoot off any nonsense coming to your mouth. Does Pragya Thakur know that Mahatma Gandhi was an ardent advocate of freedom of speech? He wrote an article in his weekly newspaper Young India in 1922. In that article, he strongly advocated freedom of expression, i.e. freedom of speech. This was a big deal for a slave country. Does Pragya know that prior to Gandhiji, Raja Ram Mohan Roy and Bal Gangadhar Tilak also stressed that if freedom of speech becomes a part of the society, it becomes easier to improve the system. This is the reason that when India became independent and the Constitution came into existence, under Article 19 (1) of the Indian Constitution, every citizen of this country was granted the right to freedom of expression. Our founding fathers did not even realise that there would be a woman like Pragya Thakur who will abuse the freedom of speech in this country.

I have serious doubts about the intention of the Bharatiya Janata Party. The party did not speak a word against Pragya. Should it be considered a silent support? While addressing an election rally in Madhya Pradesh, Prime Minister Narendra Modi only said that he will never forgive Pragya for her statement on Godse! Is saying just this enough for the PM? Of course not! The reality is that the Bharatiya Janata Party is fully backing Pragya. To bag one seat of Bhopal, the party not only made the terror-accused a member of the party but also fielded her as a candidate in the electoral fray. How can you expect any action against Pragya from such a party?

It was expected from the Congress government of Madhya Pradesh that it should have taken strong action against Pragya but it did nothing. The question is: When a case of sedition can be filed against Kanhaiya Kumar for delivering a lecture at JNU, action is taken against the cartoonist for making Uttar Pradesh chief minister Yogi Adityanath’s cartoon and Priyanka Sharma can be arrested for sharing morphed photo of West Bengal chief minister Mamata Banerjee, why action can not be taken against Pragya?

The big question is how come terror-accused Pragya Thakur dare call the killer of the Father of the Nation Mahatma Gandhi, a patriot? With whose support did she daresay this? She should be condemned by the whole country. 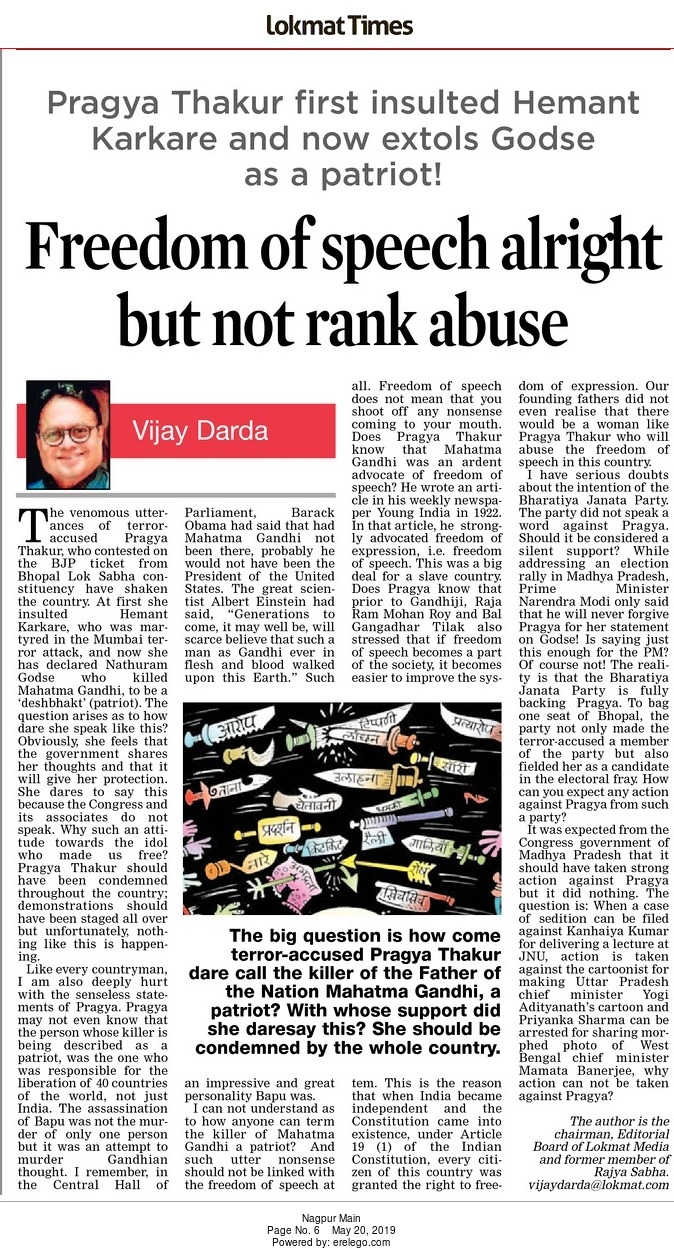 Bhopal shoot-out & the rule of law