It is nothing less than a national tragedy that on the occasion of the 125th birth anniversary of Pandit Jawaharlal Nehru, the founding father of our democratic traditions, we have a polity divided over his legacy. No Nehruvian Indian will ever claim that there can be no debate over his policies, but pray let us not damage his legacy by undermining it. Let us accept that he created a country that puts a premium on social tolerance, values, respect for diversity, and has an inviolable sanctity for democratic procedure. Over the 17 years that he ruled as Prime Minister in the formative period of our independent country, he created an equal opportunity nation that works hard to transcend all barriers of race, religion, caste, class, gender and geography. The individual success of millions of Indians in all walks of life spread across the globe is an everyday testimony to the flowering of a modern India whose foundations he laid in these years.

As a mature country in the 125th year of his birth, we should celebrate these successes, rather than engage in a political fight over his persona. We should discuss ways and means of taking these forward, building upon the healthy edifice that he created. But under the present day circumstances, this is not an easy task. The dictates of power politics and the compulsions of personal ambitions overpower rational thinking with the consequence of undermining national interest.

Let us face facts. For the last 67 years this has been Nehru’s India. Irrespective of who has been the Prime Minister and this includes the BJP’s very own Atal Behari Vajpayee, the Nehruvian ideals have held ground. But now Prime Minister Narendra Modi is no Nehruvian Indian. He is not a believer or follower of the Nehruvian ideals. But then he is certainly a product of Nehru’s commitment to democracy. He is a product of universal adult suffrage. This is an idea that Nehru championed and assiduously practiced even when there were doubts all around about trusting the uneducated Indian masses with the sovereign power of electing their rulers. Let us also admit that there would have been no Prime Minister Modi without a democratic Prime Minister Nehru. But then the problem is that gratitude of the genuine kind, and not that of the lip service variety is a tough virtue to follow. Besides, running down national heroes and bringing them down from pedestals is our favourite national pastime. However, Nehru bashing is not an idea that started with Modi. All non-Congress politicians have practised this form of public oratory for decades. But they have not succeeded in capturing power. Modi has done it, and this makes all the difference.

As a colossal personality that strode majestically on the national and international scene for five decades, Nehru was a writer, politician, thinker, philosopher and a visionary. His contribution in each of these fields of human endeavour is universally acknowledged. The fact is that he should have our undiluted respect, despite differences, for his contribution to our collective national heritage even in any one of his many avatars. Then it is also a fact that he was not just an Indian hero. His life and words, inspired international freedom struggles, and in the words of the world’s most celebrated freedom fighter Nelson Mandela: “He was my hero.” Nehru got this hero status because very early in his life he had come to realise that ‘there is no easy walk to freedom anywhere’ and had the courage and the patience to go through the process in the course of his life.

This is not the time and space to discuss his various achievements or get into a critical analysis of his weaknesses and failures. In fact there is no dearth of such material in the public domain. These are elements that pertain to the past, and now we have the future challenges to tackle. These are the challenges of creating a real bipolar democracy with two poles arguing for diametrically opposite world views. The essence of democracy is to harmonise these two seemingly contradictory approaches in the national interest. In this scenario, the point to be accepted by both sides is that Nehru the democrat laid down the framework for this polity. It has to be a democracy that respects diversity.

One is aware that one of the main criticisms against Nehru is dynastic politics. But there are two aspects that have to be considered without rancour and bias. Unlike Mahatma Gandhi who named Nehru as his successor, he did not name his daughter Indira as his successor. Indira’s rise to the Prime Minister’s post is largely a fall out of the sudden death of Lal Bahadur Shastri, who was de facto Nehru’s successor. Yes, the Gandhi dynasty — Indira, Rajiv, Sonia and Rahul — appears as a conscious product of the family’s desire to rule. But then in each case — Rajiv after Indira, and Sonia after Rajiv — there has been a terrible personal tragedy. Indira was assassinated, and so was Rajiv. Here the dynasty is more a consequence of the reluctance of the Congress party to operate without a Gandhi at the helm of affairs. But then it would be unfair to lay all the blame at their doorsteps. Political families have a tendency all over the country to retain their hold, and the Gandhis are no exception.

In practical terms, the battle of ideas in our democracy would be between the Nehruvian world view as represented by Rahul Gandhi (he may appear as a reluctant contestant now, but there is an air of inevitability around the mantle falling on him) and the anti-Nehru view propounded by Narendra Modi. For the present, Modi has won the electoral contest, but the contours of alternate view are yet to emerge, apart from the fact that it is proclaimed to be anti-Nehru. We seem to have no other option but to wait and watch as the alternate view unfolds. However, it can be safely asserted that as Indians, we have no option but to honour and defend Nehru’s legacy of democracy with diversity.

Our collective apathy to the loss of individual life is a matter of national shame. As a country we have not developed any sense of respect for the lives of our citizens. The latest incident comes from Chhattisgarh where 13 women have died because of the infections they contracted during operations conducted at a sterilisation camp. All the details –the conditions at the camp, the use of drugs, the speed at which the operations were conducted, and the need to achieve targets — point only towards one thing –lack of respect for human life. The entire system right from the chief minister down to the lowest functionary believes that it can get away with all the insults and indignities it can inflict on helpless poor women. Will this ever change? 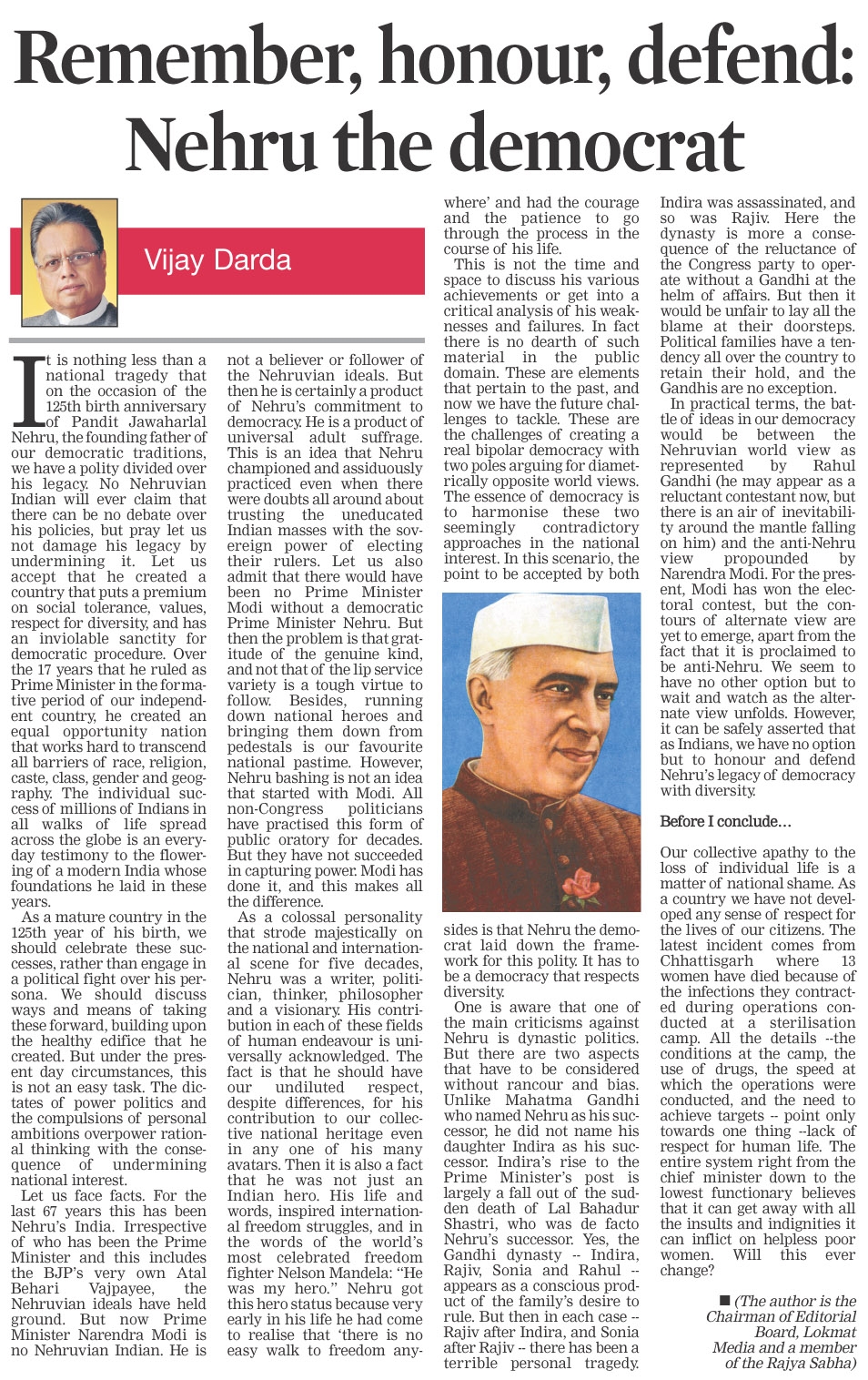 Nourishing his idea of India is vital for democracy