Government has announced the vehicle scrap page policy, let’s hope that this policy proves to be effective..!

Of course, the newly-announced Vehicle Scrap page Policy of the Central Government kindles a ray of hope that perhaps everything will be hunky-dory in the years to come! But a question also arises as to why there is still the shortage of laws? There are many existing rules which if strictly followed in letter and spirit can make roads safe and our lungs can be saved from hazards of automobile smoke. By the way, Union Road Transport and Highways Minister Nitin Gadkari has assured that the new policy will increase safety on roads and reduce pollution. He has also assured to pay the scrap value of the vehicle and a 25 per cent concession has also been announced in road tax.

Safety on the roads in India is indeed a very crucial issue. Government statistics show that on an average 53 accidents take place every hour in our country and one person dies every four minutes. Among those who are victims of road accidents, more than 76 per cent are aged between 18 and 45 years. A report from the World Bank states that more than four and a half lakh road accidents occur annually in India and one and a half lakh people die. In the last ten years, road accidents have killed 13 lakh people and injured 50 lakh people. There are thousands of people who have either been killed or wounded.

Now compare India at the international level. You will be surprised to know that India has only one per cent of the world’s vehicles but India’s share of deaths in road accidents is 11 per cent! That is, our roads remain graveyards. Though there might not be any loopholes or shortcomings in our policies, but there must be a mistake in following the law, otherwise why would there have been so many deaths? And yes, also consider that if someone dies or someone becomes completely crippled in an accident, his entire family is devastated. The figure of this social and economic loss is very large. Nobody cares about it! If accidents stop then life will be saved and you will also avoid financial loss!

If we investigate the reasons behind the accidents, then one thing that clearly emerges is that we do not have a proper system to train the drivers. Getting a licence is not a difficult task. There is no proper system to regulate the unruly drivers on the roads. If you go abroad, you will not see any arrogance on the road there. If anyone crosses the speed limit, he will be caught before the next stop. He has to pay a heavy penalty and if he repeats the mistake the next time, the licence is terminated forever. A stringent law was also talked about in India and in 2019 the Motor Vehicle Act was amended to impose heavy fines on those who break traffic rules! The objective of amending the Act was to create fear among the people that if the traffic rules are broken, greater penalties will have to be paid. Even after looking at the number of road accidents and the deaths, I do not think that increasing the penalty has made any difference. Actually, if the system of monitoring is not right there, then how will they be punished?

Now let’s talk about the dangerous smoke being emitted by the vehicles. If you go out on any road in any city of the country, you will see vehicles passing you by leaving a thick black cloud of smoke behind! There are no restrictions! Sometimes inspection is done as a matter of protocol. The rule is that every vehicle must have a PUC i.e. Pollution Under Control certificate, but who among us does not know how easy it is to get this certificate despite all the rules and regulations in force! I think that the government should take a strict action in this direction as it has become the biggest threat to the health of the people. The city air is becoming poisonous due to the smoke emanating from old and condemned vehicles. Hazardous gases such as carbon dioxide, sulfur dioxide, nitrogen oxides and harmful particles like the lyocell have made the air poisonous. For your information, let me tell you that there are more than 50 lakh vehicles which are above 15 to 20 years old. Now, if the new scrap page policy is followed properly, then such vehicles can be scrapped. It is obvious that if the old vehicles are off the road, then new vehicles are needed. With this the automobile industry can be expected to get a boom but all this can be achieved only if the law is followed. The people should mend their conduct or the government will have to act vigorously.

Just recall the days during the lockdown when there were no accidents, pollution had almost ended, animals and birds had also started coming to the urban landscape. As the lockdown ended and the unlock process started, it was back to the pavilion with the vehicles returning to the roads and the situation worsening again. Can we not bring pollution-free days back?

Hope that someday our roads will be safe and free of pollution too!

There is no doubt that death lurks at every nook and corner of our roads. Once out on road, one is not sure who will get injured or killed when. Even if you don’t die, chances are you will get crippled! If you survive the accident, then the pollution can damage your lungs. The situation is very critical indeed. 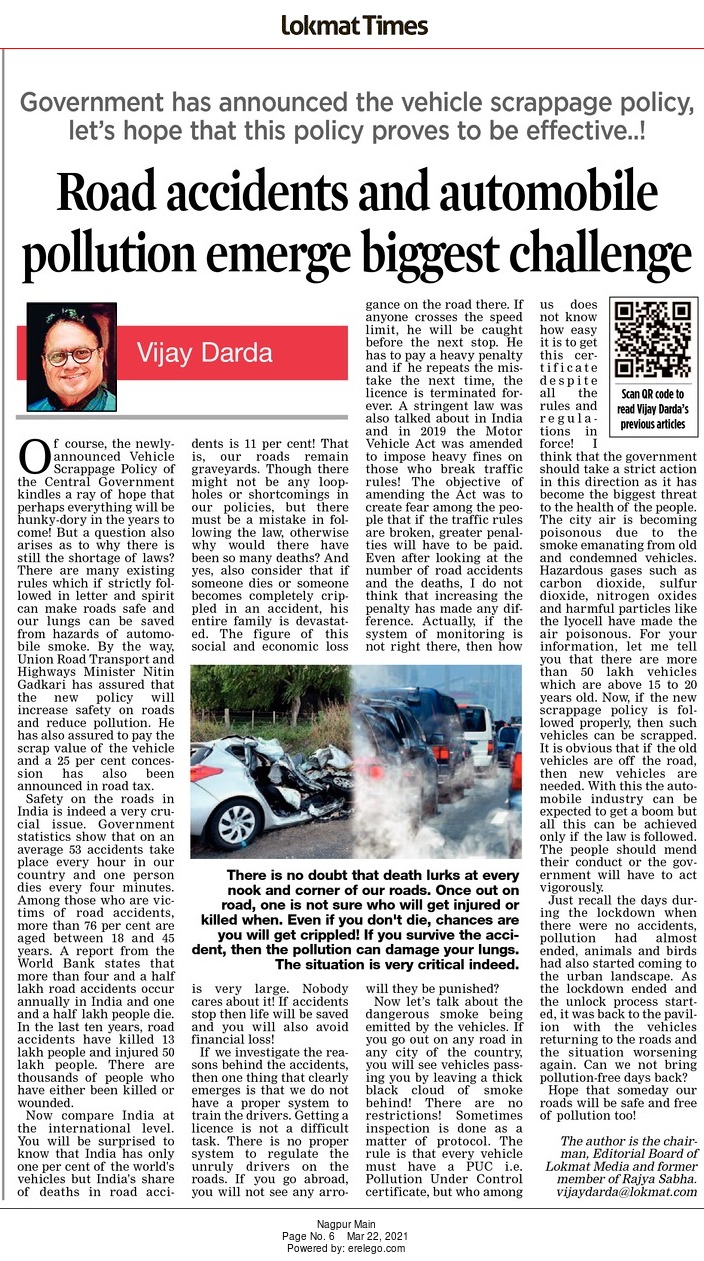