Four months of raging fire exterminated more than 50 crore wild animals, many among them of extremely rare species

How apocalyptically intense the fire in Australia’s states of New South Wales and Victoria is can be gauged from the fact that within four months, 63 lakh hectares of forest and national parks have been destroyed. Never before has such a devastation enveloping such a massive area with flames and smoke occurred. Earlier this year, there was a fire in the Amazon forests and about 9 lakh hectares of forest in New South Wales was reduced to ashes before it was controlled. Considering the sheer scale of devastation of Australian bushfires, it is difficult to control it. The area of 260 km around these forests has been evacuated as the fire is continuously spreading with the gusts of wind. Even as the firefighters seem to douse the fire in one area, suddenly it erupts in another.

Sydney University’s initial estimate is that the fire destroyed more than 50 crore wild animals living in forests and national parks. The worst effect of the fire has been on the koala. Most koalas live in the mid-northern region of New South Wales. The koala, of the species Phascolarctidae, is the last rare creature. It is difficult to say whether this species has been completely destroyed in this fire or some have survived. It is also difficult for them to survive because they move very slowly. There were a lot of them in the forests of Australia, but most koalas were killed in South Australia in the 20th century. Later, when it felt that the koalas were dying, the campaign to preserve them started. Australia had given this species of koala to some other countries of the world; only those may be left now!

A large number of kangaroos have also perished in these forests. Those which were lucky enough ran towards the cities to survive. But even after reaching many cities, they were so badly burnt that it was difficult to save them. People living around the forests have also fallen victim to this towering inferno. Thousands have fled to the shores to escape the fire but dozens of people have also died. Thousands of houses have been destroyed. People in Australia are also troubled by the encircling smoke. The sky is filled with smoke for hundreds of kilometres. Even air pollution has spread rapidly in the capital Canberra. The impact of the fire has reached neighbouring New Zealand. The scenario has become scary with orange coloured smoke enveloping the sky. This smoke has covered most of the southern island, and glaciers that look completely white otherwise are looking brown now.

Therefore, the question that should naturally arise in the mind is how the fire started and how it became so catastrophic? In fact, the fire can sometimes be caused by human actions and many times natural incidents are also responsible for it. If the lightning falls on the dry bushes, a fire is ignited. Since the fire breaks out somewhere inside the forest, it is not initially noticed. The wind spreads this fire to other areas as well. Now it so happens that if the fire spreads more, the smoke produced from it starts gathering in the clouds. This creates conditions for celestial lightning. This lightning then sets some other part on fire. Just last week, 130 places were on fire in one area. In such a situation, it becomes difficult for the firemen to reach the fire. Such an unprecedented situation has developed in Australia.

Now because the weather is hot, it has provided a favourable condition for the fire to spread far and wide. Anyway, the average temperature in Australia has increased by one degree Celsius in the last hundred years. The temperature in the last week of December was around 40 degree Celsius. As it is, the fire in the forests makes the surrounding air so hot that it fuels the fire further. If the fire erupts in some areas, aerial spraying of water can be effective. But when the fire turns into a towering inferno, it makes the water vaporize before it reaches the fire. Four months after the fire broke out in September, it could not be controlled even till January. How much area do you think has been destroyed by fire? It is reported that the uncontrolled fire must have burned the size of landmass of South England.

By the way, we also need to understand that this horrific fire is not only an issue confined to Australia alone. This is an alarm bell for the entire world. The way we are destroying the Earth, the temperature is constantly rising. This is a dangerous sign. Today, this calamity has visited Australia, tomorrow it may visit other countries also. It is important to understand the warning of nature, otherwise extinction of mankind is inevitable! The fire in Australia’s forests is not showing any sign of abating. It burnt to death more than 50 crore wild animals. Many among them were of extremely rare species. This is the most tragic incident of this century. This fire is also a major warning for the whole world. 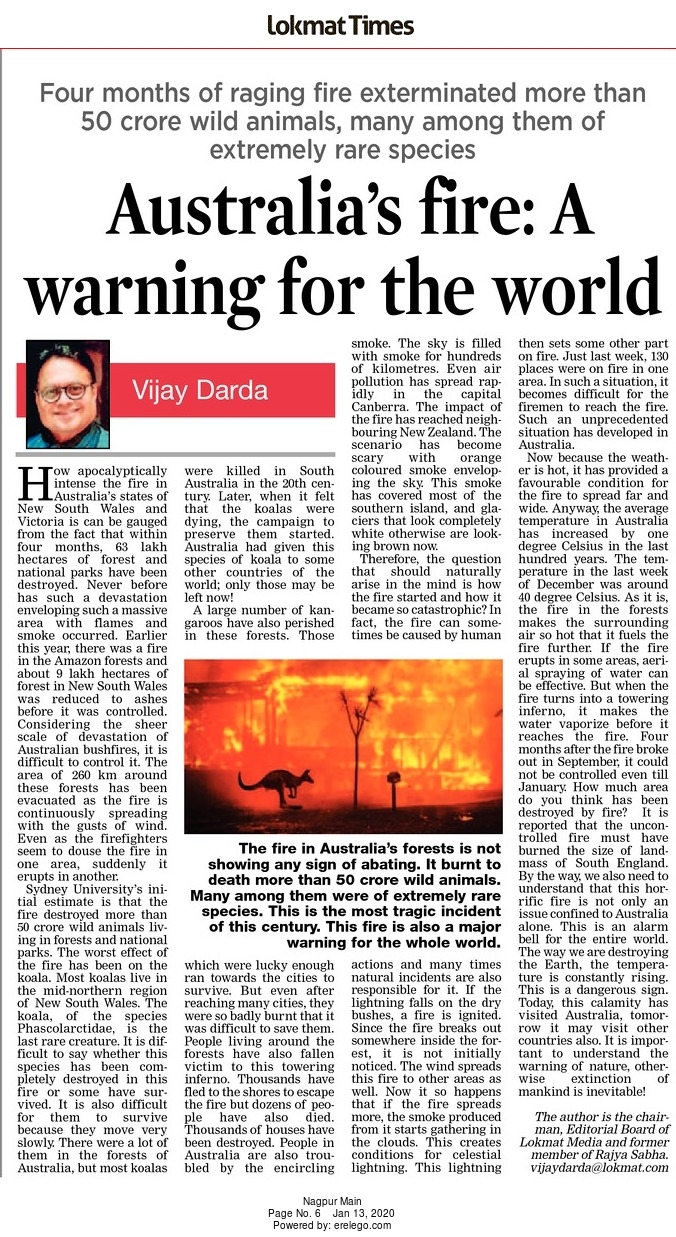