For all of us April 14th is a red letter day. It was on this day that India’s liberator par excellence Dr Babasaheb Bhimrao Ambedkar was born in 1891 in a poor family. As we remember him reverentially we salute him for all his contributions. He is the crowning jewel in the long tradition of the great Indian leaders who have woven social equality into the fabric of political freedom. The roll of honours is long and inspiring. It begins with great reformers like Raja Ram Mohan Roy, Mahatma Jyotiba Phule, Agarkar and encompasses all those great souls like Sant Gadgebaba Maharaj who touched every aspect of liberation and paved the path to a near ‘total revolution.”

According to Panini, the ancient Sanskrit grammarian, the society finds its future Gods from among those who expend their lives in the cause of social uplift. Ram, Krishna, Buddha, Mahavir, Jesus Christ, Prophet Mohammad, Guru Nanak Devji and Gandhi ji were all human beings but as per Panini, they all reached the height of Gods. Dr Ambedkar is a name that can reach that stage in our age.

Notwithstanding Pandit Jawaharlal Nehru’s assertion that India as a civilisation has been evolving over the past 5,000 years, it remains an undeniable reality that an element of an archaic ‘sanatani’ mind set has been one of its constant features. This section has sown the seeds of caste based inequalities and has worked towards fomenting divisions among the people and creating a sense of conflict. Even though the force of the civilisation has been strong, still it has not managed to snuff out this divisive virus from the society. The problem thus manifests itself in the form of a divide between the ‘upper and lower castes’, the practice of untouchability, and the fact that even among the people belonging to the same religion there is segregation on caste lines. There were attempts at reforms, but these were bogged down by their struggle for one particular issue. At times, these reforms were successful, and at others these attempts were defeated. It was Dr Bhimrao Ambedkar who brought about the revolutionary change in the decisive fight against this vicious cycle. He had the mental and the intellectual ability to wage a sustained battle against these forces and empower the deprived classes with the power to fight.

Born exactly 125 years ago on this date, Dr Ambedkar spent a lifetime in the cause of this liberation. To his credit, he also dedicated his life to acquire the knowledge to wage this war of liberation. He was aware that the war for liberation has to be fought is not just attitudinal, but also has to be at intellectual and ideological levels. He thus imbibed a deep knowledge and understanding of theology, economics, history, jurisprudence, social and political sciences. Even as he waged this battle, he had to undergo extreme humiliations. But then a day dawned when the country anointed him as the architect of its Constitution. The Constitution has of course given us the inspiration to imbibe values of justice, freedom, equality, fraternity, and secularism. And it has also imbibed a culture that tells us that those who go against these values are the ‘enemies of the society’.

It was his intense desire that everyone must get the opportunity to participate in the all round progress and growth without losing the essential humane concerns. For him education was the route through which this could be achieved, and he instilled a deep yearning for it in the society. Besides, he also wanted to make sure that others do not have to suffer the humiliation experienced by him. He spent his life towards achieving this goal.

It is now 69 years since the country got independence. But the fight for the values enunciated by Dr Babasaheb Ambedkar continues. The country is as blinded by religion as it is by caste. The inequalities have remained as they were. We see that the divide among the people has grown stronger and political parties that profit from these divisions are gaining strength. But this is darkness, before the dawn. The inspiration and strength to overcome all these evil forces comes from Dr Babasaheb Ambedkar’s teachings.

It is because of this strength that the parties and organisations that have recently come to power are engaged in the charade of appropriating his legacy. But then just as you cannot shut out the sun, darkness is also inevitably dispelled. Dr Babasaheb Ambedkar is reverentially referred to as the ‘sun of knowledge’. The darkness that envelops the nation would be dispelled by the glow of this ‘sun of knowledge’. We will begin a new tomorrow that would usher in an era of true justice, freedom, equality, fraternity, secularism and a unified world order.

It is ingrained in Indian belief that when the society lacks direction, a great soul is born to show the right path. During his life time Dr Babasaheb Ambedkar showed us this path, and now as we celebrate his 125th birth anniversary his inspirational teachings will show us the path. I salute this Indian visionary, this liberator of the Dalit brotherhood, and the architect of the Indian Constitution on behalf of the Lokmat family and myself – a million times. 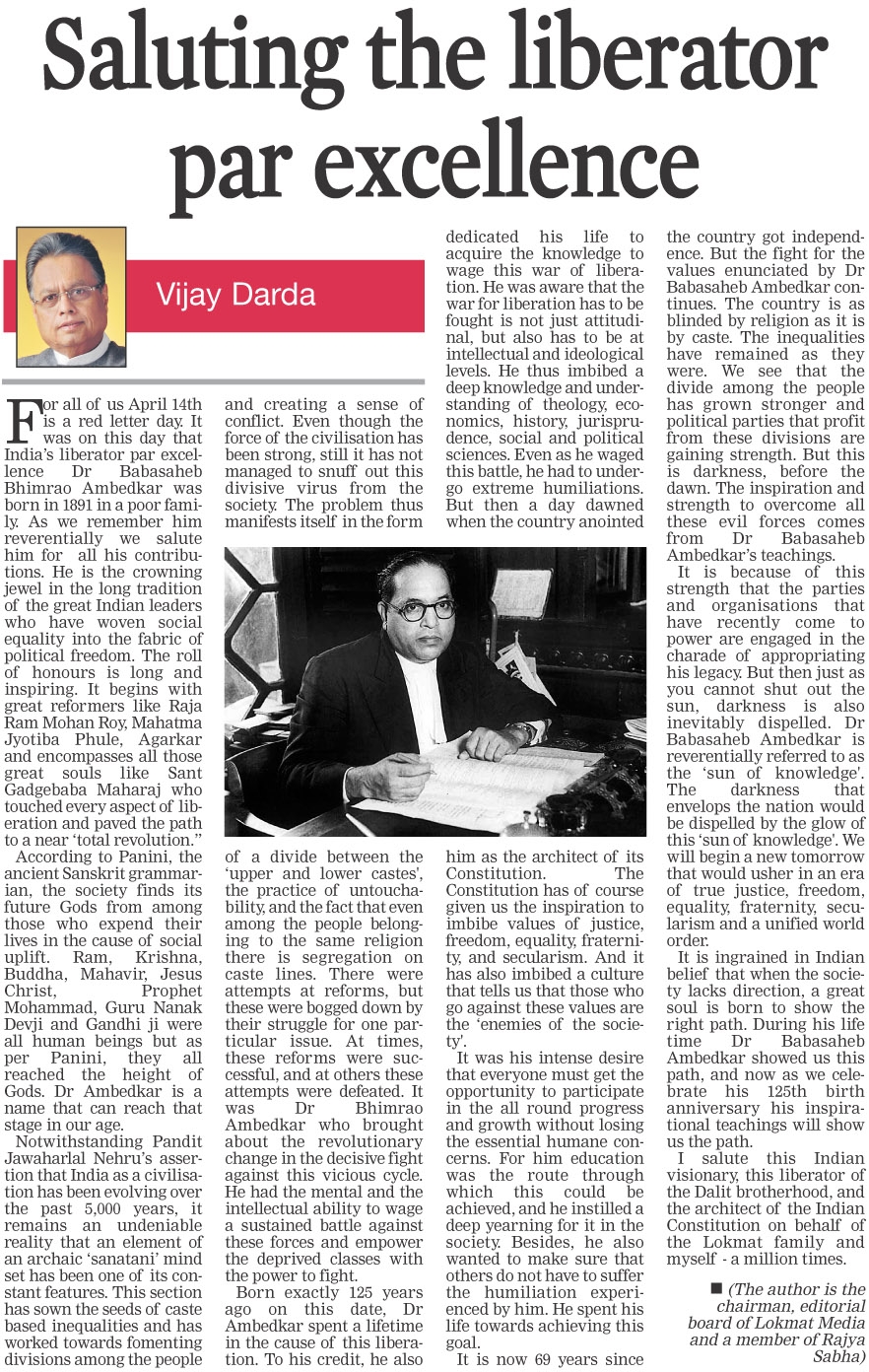 Do not turn India into an arena of hatred