Last week we witnessed some very unpalatable scenes. Even as television channels were showing visuals of Shiv Sena MP Rajan Vichare force-feeding a canteen supervisor at the Maharashtra Sadan, the MPs were denying that any such incident took place. Later, when they realised that such a denial was not tenable, MP Vichare accepted that the incident had taken place, but then added that he did not know that the canteen supervisor was a Muslim. So, we can conclude that he was not against the act of force- feeding per se and his regret was limited to the fact the religious feelings of a Muslim had been hurt because he was fasting. This also means that if the canteen supervisor had been a Hindu, then the act of force-feeding would have been justified. This is what we call adding insult to injury. Are MPs also elected to justify such behaviour?

The reactions to this incident were also bizarre. As BJP MP observed: “And if bad food is served under supervision of an officer what should be the remedy?” Not stopping at that the MP also blamed the Congress for hyping up the issue? There is no intent to single out a BJP MP, the entire BJP-Shiv Sena leadership has gone on this track.

The remedy is very simple. Fellow parliamentarian Vichare is not an ordinary person. He is in the select category of citizens that get a preference every where in public life as a matter of right. He ranks 25th in the order of preference and belongs to a category from which ministers and prime ministers are chosen. Besides, we are also being told that the quality of food at Maharashtra Sadan has been bad for the last two months. The Sena MPs had been facing this problem for so long. Surely, they had ample time to take up the matter with anyone starting from the resident commissioner, chief secretary going right up to the chief minister. Where was the need for them to become food inspectors, and go on a raid-like visit in full view of television cameras? Besides, getting physical with anyone is not part of decent behaviour. It is a question of simple manners. Vichare’s act above all is a show of indecency and bad manners.

Unfortunately, we live in times where everything becomes political within no time. So, although Vichare’s act was a matter of bad personal behaviour, and should have been condemned by everyone, it got transformed into a political slugfest and he got all the support from the right wing elements.

But the worrying aspect is not limited to Vichare’s behaviour. What followed in the Lok Sabha was even more disgusting. The scenes between BJP MP Ramesh Bidhuri on the one side and Asaduddin Owaisi and Pappu Yadav on the other and the slogans raised by him could have had dangerous implications. Fortunately, senior leader L K Advani scolded him and he also apologised for his behaviour within a short time.

We are all familiar with the aggressive ways of the Shiv Sena, and we also know that the BJP has always played to the gallery of the right wing forces on such issues in the past. However, there was a ray of hope when Prime Minister Narendra Modi emphasised that he is the Prime Minister of the entire country and not of any one section. Even during the election campaign, Modi ensured that the focus remains on the development agenda. The people of this multi-cultural and multi-religion nation have put great faith in that assertion from him. The people have also put faith in the BJP, that having come to power it shall stick to the agenda of development and good governance and would not rake up divisive issues. It is in the same context that the people were encouraged when he invited all the heads of states from SAARC nations for his swearing-in ceremony. That gesture was seen as evidence that Modi as Prime Minister would be putting the nation first.

So, there is a great sense of unease when voices like the one from the Dhavalikar brothers in Goa talk of India becoming a Hindu nation under Modi get an endorsement from the deputy chief minister (incidentally a Christian, that he is a Hindu Christian and India is already a Hindu rashtra), or when a BJP leader from Telangana questions the Indian-ness of tennis star Sania Mirza and calls her “Pakistan-ki bahu.” Now, Sania married Pakistani cricketer Shoaib Malik some years ago, but she is not the first or only Indian celebrity to do so.

The problem is not that these people represent the fringe elements. The difficulty arises because the phraseology used by these elements comes from the lexicon of the BJP’s ideological mentor — the RSS. The Hindu rashtra is the avowed objective of the RSS, and the terms Hindu Christians and Hindu Muslims are used by the Sangh leaders. In so far as the test of loyalty of the Muslims towards India is concerned, then the reality is that the Sangh has not spared anyone who has come within their cross-hairs.

It is also well-known that communal polarisation has always paid rich dividends to the BJP in elections, and the RSS has been the prime mover in such campaigns. But then the core of democracy lies in governing a country as per the Constitution, and it is not unreasonable to expect that having come to power with an unprecedented absolute majority on its own, the BJP would not like to play tricks with this cardinal principle.

Indeed, it would be politically sensible as well, that having its goal, the BJP and Prime Minister Modi would consolidate their position through good governance. It is something that the people have been craving for. Besides, Modi is personally aware that the main reason for the Congress rule in the country for 60 years is not that there were no alternatives. The Congress ruled for six long decades, because the alternatives failed to prove good governance. Surely, he would not like to let the fringe elements rock his boat with their pet fetishes. 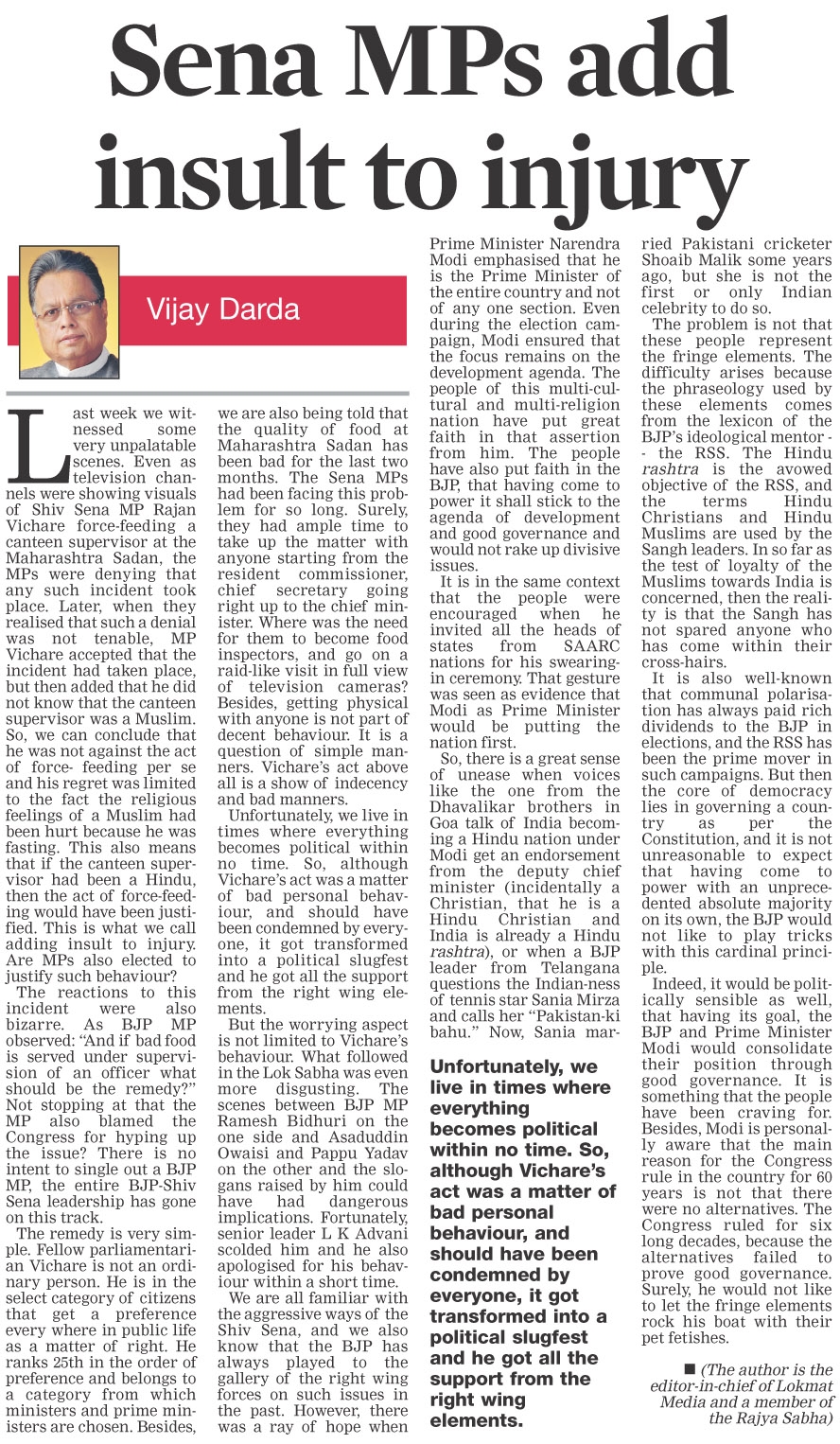