Islamic State is casting its evil eye on our country too; we have to adopt aggressive tactics at every level.

The serial blasts in Sri Lanka should not be looked at in isolation as just another terror act, but it needs to be seen as terrorist expansion in this region, especially, when the dreaded terrorist outfit Islamic State has claimed responsibility for it. In the initial period, it was felt that there is no IS in Sri Lanka. Then how did it carry out the blasts? But now the truth has come out. On Saturday, 15 terrorists were killed and dozens were arrested. Officials suspect that more than 140 IS terrorists are hidden in Sri Lanka. This is a matter of deep concern.

There is no doubt that India is on the target of Islamic State. Between July 2014 and July 2016, the Islamic State published a magazine from Rakka and it was titled ‘Dabiq’. In its inaugural issue, the Islamic State had declared its focus to be on Bengal province and also a Khalifa was appointed. In that Bengal province, many countries including India, Pakistan, Bangladesh, Sri Lanka, Bhutan, Nepal, Myanmar, Thailand were included. After this the terror outfit had issued its manifesto which clearly stated that it would launch jihad in India. That announcement was called ‘Black Flag of IS’. It is obvious that this dreadful organisation is casting its evil eye on India.

The IS flags have been visible in some parts of Kashmir and it has been trying to attract the youth through social media. Intelligence agencies have been looking at this aspect too. However, Islamic State did not get much success in this case. It may have got thousands of terrorists from Europe but it could’t trap more than two dozen young people from India. In fact, India’s Muslim community is very cautious in this matter and knows that Islamic State has nothing to do with Islam. Large number of Muslims in the world have been killed by this terror outfit. More than a thousand of Imams and Maulvis have issued fatwas against Islamic State. Nevertheless, the need to be vigilant can not be overruled. This terror organisation poses a grave threat to India. Keeping in view the Islamic State, National Security Advisor Ajit Doval had stressed the need to change strategy in the context of Pakistan-Occupied Kashmir. This is the route from which IS terrorists can enter India. However, Pakistan is not supporting IS but it is present in Pakistan and it is also deep rooted in Afghanistan. If it can reach Sri Lanka, then it can infiltrate into South India through the sea route as well.

The NIA had arrested 6 people from Kerala in connection with the IS in 2016. Indeed, 21 young people had disappeared from Kerala and NIA was investigating that case. It was revealed in the investigation that a person named Sajir Mangalachari Abdullah was provoking the youths to work for IS by brainwashing them. Abdullah is a resident of Kerala but now lives in Nangarhar province of Afghanistan, which is currently under the influence of Islamic State. 21 young people from Kerala were trained there. After that it is not clear where they went. Apart from Kerala, intelligence agencies are also monitoring Telangana, Andhra Pradesh, Karnataka, Tamil Nadu, Maharashtra, West Bengal, Bihar, UP and especially Kashmir, so that Islamic State does not succeed in seducing the Muslim youths to its pernicious ideology. The problem is that even the educated youths have also become victims of their indoctrination. The young men in Kerala who were trapped by them were highly educated like a researcher, a graphic designer, a chartered accountant! It has come to light that Kashmiris top the list of those who surf the Islamic State website, followed by those in UP and Maharashtra.

So, one big question is how to handle this situation and how to eliminate the dangers of Islamic State. The only way is to create an atmosphere of confidence among the Muslim youths and they should be explained that organisations like IS are not the sympathizers of the Muslims but the killers of Muslims. They have devastated Iraq, destroyed Syria. Wherever they went, they made people’s life hellish. Everyone needs to be alert about Islamic State. Our intelligence agencies have to be particularly on the alert.

After the devastating blasts in Sri Lanka, it has become clear that the dreaded terrorist organisation called Islamic State has reached our neighborhood. Everyone knows that India is on its target, so we have to be extremely alert and cautious. 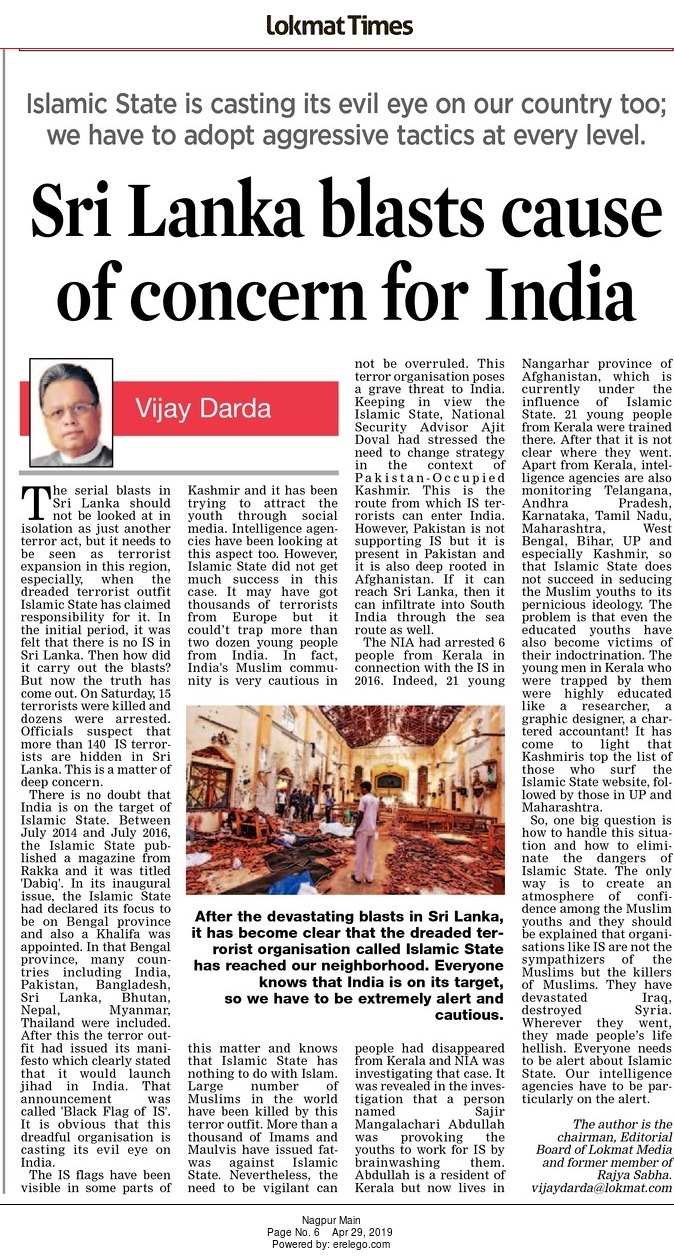 Nobody gains anything from war!