We are the world’s largest democracy. Every vote counts and hence you must cast your vote.

The first round of the 17th Lok Sabha elections is just three days away. It is the biggest celebration of democracy. You will decide who is going to rule over this country. Each and every vote counts. Your vote not only decides the victory or defeat of candidates and parties, but it also helps in ensuring which path you want to take the country on. Therefore, I humbly request you to exercise your franchise. Think very carefully before casting your valuable vote. All I want to emphasise is that no country can move forward on the basis of caste and religion. A country can move forward powered by its skills, strategy and inherent energy!

We should keep in mind that we have achieved our voting right after a hard struggle. Being able to recover from the slavery of centuries and establishing it as the world’s largest democracy was not an easy task. At the time of independence, about 85 per cent of the people were illiterate. How would the republic succeed? But we did what the world did not expect. In spite of a lot of ironies and glitches, the democracy has succeeded in India, thanks to the contribution of every citizen of India. It is our responsibility to maintain this tradition.

So let us talk about the introduction of the great power of democracy in India from where we started our republican journey. Although before the independence, interim elections were held but they were limited to 11 provinces under British rule. No elections were held in the princely states under the rulers. When we got independence in 1947, we decided to follow the path of Republic or Republic of Democracy. Indian Constitution came into force on January 26, 1950. The country became a Republic. The Election Commission was formed on January 25, 1950 just a day before and ICS bureaucrat Sukumar Sen was appointed as the first Election Commissioner. He was also a great mathematician. Holding the elections in the entire country posed a great challenge for him and his team. Nobody had any previous experience! But Sen and his team showed spectacular determination. The first general elections were held from October 25, 1951 to February 21, 1952, i.e. about four months.

The general elections were held for 489 Lok Sabha seats and 3,283 seats of the State Legislative Assemblies. Some 173,212,343 voters were registered, out of which 10.59 crore voters cast their votes. The world was surprised! The way Sen and his team conducted the elections was really surprising. Illiteracy was pervasive and people could not read the names of the candidates. So Sen used different ballot boxes for different election symbols. In North India in particular, the number of such women was very large who did not tell their names and used to identify themselves as ‘wife of so-and-so’ and ‘mother of so-and-so’. Sen decided to remove 28 lakh women from the voters’ list in the first election so that there is no bogus voting. In the second election, such women were told that they must tell their names. In order to educate people about elections, the Election Commission used to take help of the radio and films.

Congress won 364 of the 489 seats in the first parliamentary elections. And out of a total of 3,283 seats of State Legislative Assemblies, Congress won 2,247 seats. At the second position was CPI, which bagged only 16 seats in the Lok Sabha. The then Radio Moscow had helped CPI a lot through propaganda in its favour, but the electorate preferred Jawaharlal Nehru. At that time, Nehruji was aggressively attacking communalism.

I discussed the first general elections so that our youth can understand how our democratic journey started amid great difficulty. Fortunately, illiteracy has been overcome in the country. From the ballot box we have reached the era of electronic voting machines (EVMs). But unfortunately, today many of us are so influenced by caste, religion, sect and ideology that it causes confusion at the time of casting votes. I urge that before casting a vote, definitely think which party will strengthen the country, will ensure social unity and increase the credibility of India in the world. Read the party’s manifesto properly and decide who can give a better direction to the country. And of course, our country is important for us all. Political parties come only next to the country. Any party may lose or win this election, what matters is that the country must win! So remember to step out of the house to cast your valuable vote.

Vote is the power through which the common man maintains his hold on power and decides the direction of the country. The first round of the 17th Lok Sabha elections is scheduled to begin on April 11. You must realise the value of your vote and step out to exercise your franchise. 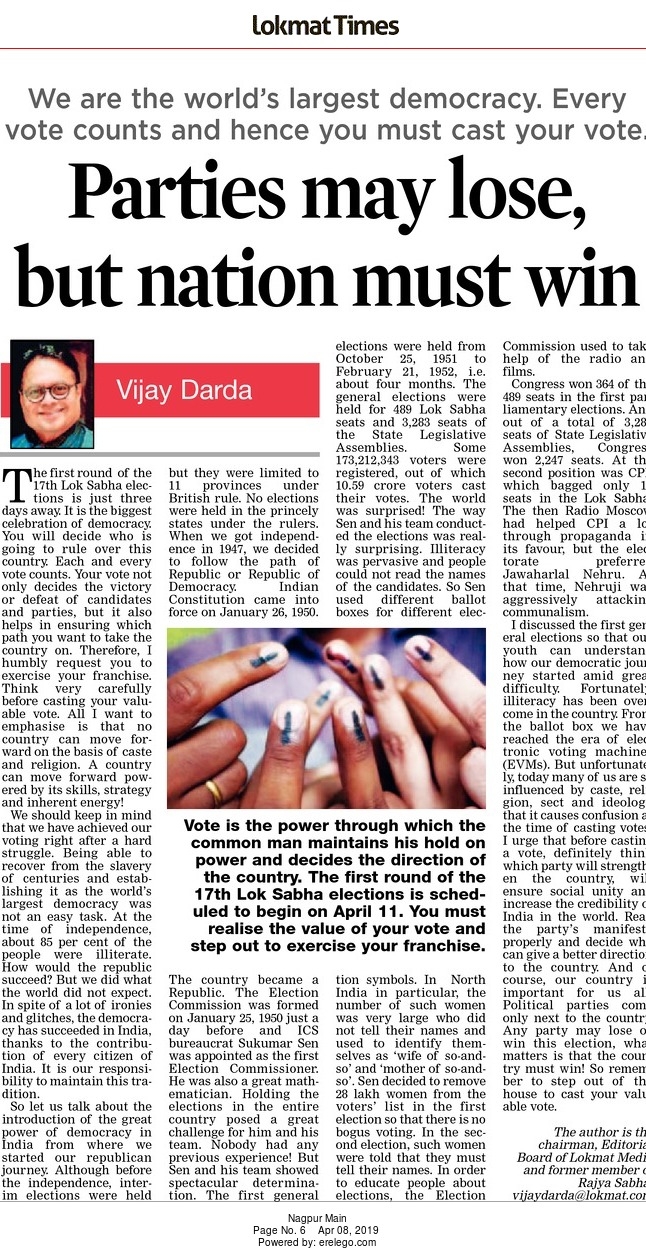