Only the naive and the foolish would be surprised by the revelations of the spot-fixing scandal in IPL. Given the way we have been managing our games and sports, this is the only possible outcome. After all, didn’t the IOC throw us out of the Olympic games? People have a tendency to blame the big bucks in cricket for the mess, and they raise irrational demands like ending the IPL. Let us understand, the mess in IPL is the symptom of the bigger malaise that ails our sports. If at all any cleansing has to come, then it has to be all embracing.

True, the BCCI chief N Srinivasan is at the peak of this rot, and needs no mercy, but then no one is blameless. Indeed, Srini as he is referred to in the media, had no business to be the BCCI chief in the first place. As the treasurer, the dossier of his acts of omission and commission is a matter of record in front of the parliamentary standing committee for finance. He admitted to several violations of the law. The committee had zeroed on several violations of the laws related to foreign exchange when the IPL-2 was staged in South Africa, and Srini as a member of the governing council who signed the cheques passed off the blame to the discredited Lalit Modi, when he was fully aware that the then out of favour first IPL commissioner could not be solely blamed and he also had to shoulder the responsibility.

But then the BCCI is the biggest all party outfit in this country. The unanimity that is shown in electing presidents like Srini- he was backed by the power elite- now on line to be the next BCCI chief Arun Jaitley (BJP), Rajiv Shukla (Congress) who became the IPL Commissioner, former BCCI and ICC chief Sharad Pawar (NCP) and Farooq Abdullah (National Conference) with state bosses like Jyotiraditya Scindia (Madhya Pradesh) Narendra Modi (Gujarat) makes a parliamentarian like me wonder if the same unity and sense of purpose were to be witnessed in the running of the parliament then not a day would be lost to disruptions. But all we get to listen from this eminence grise of politics is that we should not bring politics into sports, whereas they are busy politicking in sports.

As a politician, I would be going against my grain, if I were to suggest that politicians should be kept away from sports administration. I do believe that politicians can certainly contribute meaningfully in the growth of sports. But then they should not get involved in the running of the game on a day-to-day basis. We all remember the facile explanation that came from the then ICC boss Sharad Pawar that his dual responsibilities do not clash, and he can find the time to attend to his heavy ministerial duties as well. But then let us remember that not everyone is blessed with the genius of Sharad Pawar.

A Rajiv Shukla here and a Vijay Malhotra there and some other lesser mortals can easily make a mess of a beautiful game, and this is the muck that ails our sports. In none of the Olympic events we have been able to master world class skills, and we languish on the bottom of the medals tally, whereas countries that are even smaller than many of our districts produce World Champs and gold medalists by the dozen. Our athletes will get the time and energy to develop their skills only if they are able to break free of the politicking of these politicians in sports. We are all too familiar with the murky goings on in the Indian Hockey Federation and the decline of hockey as a game in which we had been Olympic champs for 30 years.

The suffocations and the frustrations of the players who are at the mercy of these administrators cannot be imagined by the spectators. But the plight of Saurav Ganguly who was a victim of the Pawar-Dalmiya power tussle is well-known. Can it be anyone’s case that this former India skipper was left out of one of the IPL auctions without any element of politicking behind it? The point to be noted is that even players like Ganguly, Sachin Tendulkar and Rahul Dravid, celebrated the world over for their skills, have to remain at the mercy of these administrators who would find it difficult to explain even the basics of the game.

Maltreatment of players and insulting the former players is an endemic disease with the BCCI, but this is one of its minor sins. The biggest sin continually committed by the BCCI masters is defiling the game of cricket that is the most unifying religion in our country. When Sachin Tendulkar is at the crease, the nation comes to a halt, because it believes in him as Cricketing God, and prays for his success. In this IPL spot fixing, Srini and Co have defiled this religion. Now whether a court of law proves them guilty or not, in the eyes of the people, the religion has been defiled, and his resignation from the BCCI chief’s post would be not even the first step in his atonement of this sin.

As a parliamentarian, it is my hope and prayer that the government seizes this opportunity to wield the broom and clean the mess that runs deep into our sports. We are not a nation of intellectual paupers that we cannot devise a system that serves the interests of the sports and not these politicians in sports. Just as every dark cloud has a silver-lining, this murky chapter in our cricketing history should provide us the opportunity to create an atmosphere in which our youth get the opportunity to excel in every game without the debilitating shackles imposed by politicians. It is indeed, the collective duty of the parliament to come together, and in this there is no harming a borrowing leaf from the all party consensus that prevails in the much maligned BCCI, and hammering together a solution that liberates us all. May be then the maverick Sreesanth would have inadvertently done a good turn to sports. 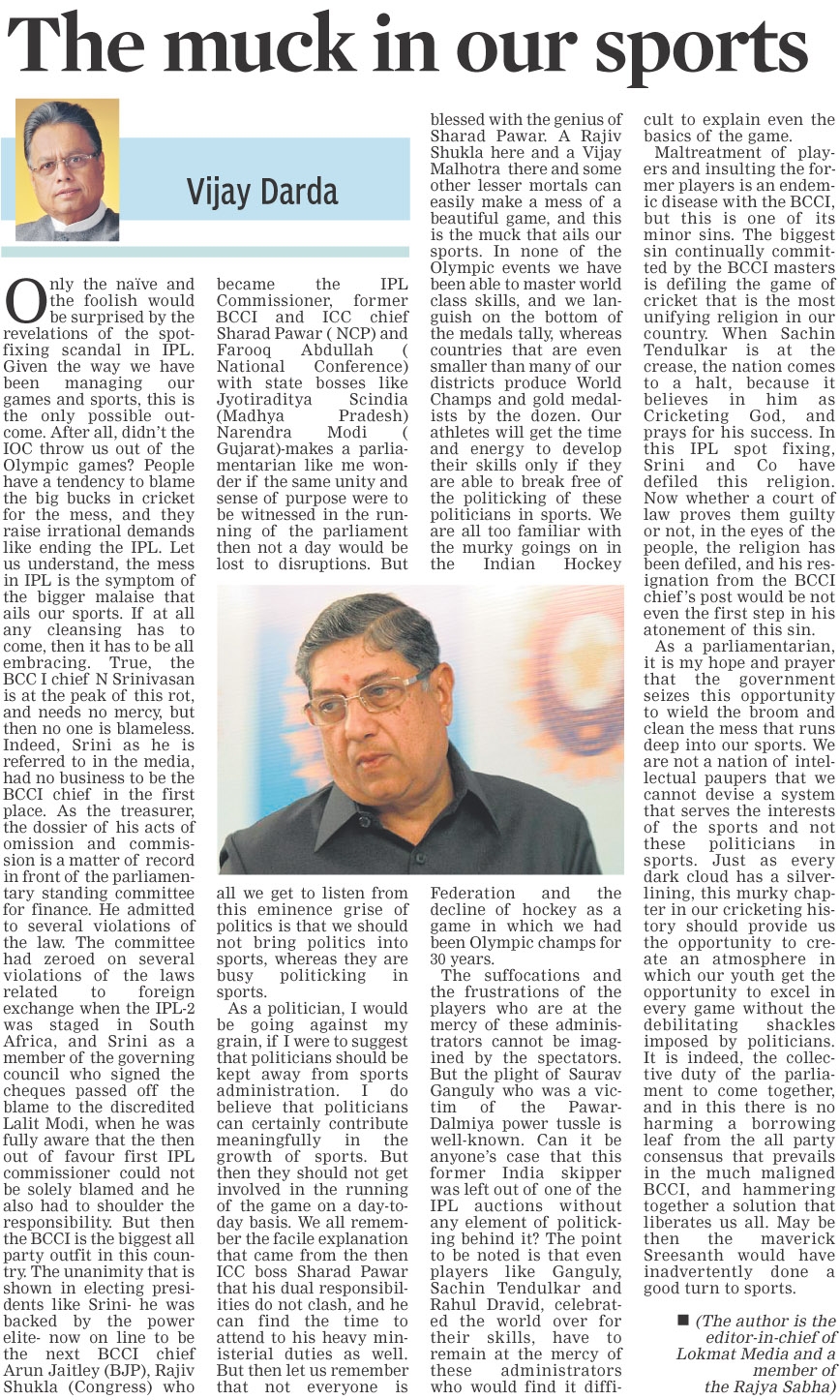 The usurpers of professional cricket