If your neighbour is in trouble, can you live in peace? This question is also haunting our country. Pakistan, our immediate neighbour and part of us before independence, is going through a time of severe crisis. It has reached the dark tunnel not only financially but socially as well. Now the big question is: Will Pakistan ever be able to get out of this mess? The question is also whether Imran Khan will continue to be in the Prime Minister’s seat or become the victim of public wrath.

When Imran Khan entered politics, he challenged the dominant power structure and his stand was one that inspired confidence in the masses. The Pakistani people saw their much-awaited messiah in him and elevated him to the peak of power. Pakistani army also expressed confidence in Imran. Imran became Prime Minister and began his innings with much optimism but gradually everything started to crumble. Inflation started rising rapidly and the Opposition slowly started to unite again. Now protests are going on against Imran in almost the entire country. It is likely that the army may also dump him. Then this question will arise again: Who will take Pakistan out of the current mess?

When Imran Khan assumed reins of power, he had to grapple with the abysmal balance of payments situation and deteriorating economic condition. The Pakistani rupee had depreciated badly. To maintain balance of payments, new loans had to be taken. The country has already sunk badly in China’s debt-trap. Now the situation is such that it is not able to even get loan. According to data from the International Monetary Fund, in 2019 and 2020, Pakistan’s GDP growth rate will be less than three per cent. It is obvious that when the economy stumbles, inflation starts rising by leaps and bounds. Leave aside the matter of petrol and diesel, prices of common vegetables are also skyrocketing. The jobs are on decline. Of the total population of 22 crore, about 4 crore people are unemployed in Pakistan.

Experts believe that the outcome of this rising unemployment is that the youths of the country are increasingly coming under the influence of terrorist organisations. Religious fanaticism on one hand and the greed to make some money on the other is turning these youths into terrorists. These terrorists are not only targeting India, but also causing trouble for Pakistan itself. The Pakistani army itself admits that Pakistan’s economy has lost about Rs 300 crore due to terrorism. More than 81,000 people including security forces have been killed. The Pakistan army’s statistics itself state that it has killed about 17,500 terrorists within the country so far, but the reality is that many times more than those killed are still present in Pakistan.

There is no doubt that Imran Khan did try to keep terrorists under control, but the fact is that it is not just within his power. Terrorism cannot cease until the Pakistani army wants it. Protesting against India and nurturing terrorism is the most preferred job of the Pakistan army. It also succeeds in misleading the people there in the name of war against India. History is witness that Pakistani army did not allow any political initiative of friendship with India to succeed. Imran Khan also fell victim to this machination.

Therefore, the biggest question that Imran Khan is now faced with is, how can he save himself and the country? Opposition parties have launched a ‘freedom movement’ under the leadership of Maulana Fazal-ur-Rehman of Jamiat Ulema-e-Islam-Fazal (JUI-F). Rallies have been organised all over the country and the army’s interference is also being opposed. This fierce protest has also worried the army. In such a situation, the apprehension is being expressed whether the army will make Imran Khan a victim in order to pacify the public ire?

Imran Khan has extended the term of army chief Qamar Javed Bajwa. But will this gamble pay off? Be that as it may, it is very important for India to keep an eye on the situation as it unfolds. India is directly affected by whatever happens in Pakistan. It is very important for India that the situation in Pakistan returns to normalcy. As long as the military dominates there, India cannot expect better relations. Pakistan being in the dark tunnel is not in anyone’s interests but the question is whether it will be able to get out of this mess?

There is no doubt now that Pakistan is trapped in a dark tunnel. The country is cracking under huge debt burden. People are badly affected by inflation. Resentment against Imran Khan is continuously on the rise. Political conditions are also worsening by the day. 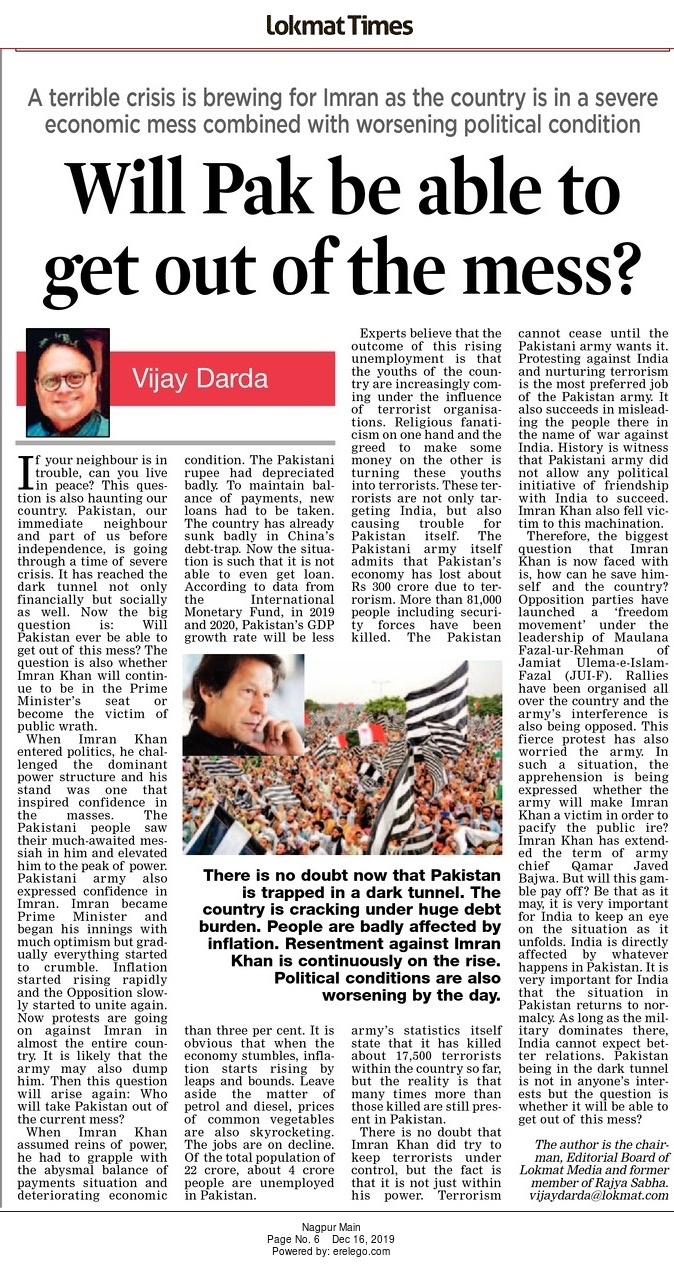