They turned heroine Kangana into a ‘hero’

Equating Mumbai with ‘PoK’ is condemnable, no doubt, but making a mountain out of a molehill is not any wiser too

I am astonished by the way Kangana Ranaut’s case has received such prominence. Is she such a big social or political celebrity as to cause a storm by her irresponsible statement? I am displeased with her statement vis-a-vis the Mumbai Police and the one likening Mumbai to PoK, but I do not think it is necessary to give it so much importance! She is a film heroine but politics turned her into a ‘hero’.

There has always been a respect and esteem for Balasaheb Thackeray’s place ‘Matoshree’ throughout Mumbai. It also inspired fear but Kangana has shattered that fear or, in her own words, arrogance. I was reminded of the film industry of the South where MGR, NTR, Karunanidhi and Jayalalithaa became the real life heroes in politics after playing several characters in their films. Kangana’s speciality is that she did not bow down to the stardom of Bollywood people. She has been fighting with impunity. She never compromised.

There is a boldness and passion in her. She exhibited the courage to fight the people of the industry from where people earn their livelihood and where they get prestige and honour. She has been fighting the high and mighty of the Bollywood without thinking what will happen to her next? In Bollywood, I have seen big heroes and heroines making compromises, but Kangana is not ready to budge an inch and works on her terms. During a discussion hosted by the Lokmat Media group’s annual magazine Deepotsav, she once said, “I will get all the work if I have talent.” It seems that it was not proper to cross swords with such a doughty girl from the Himalayas. Sharad Pawar too advised the chief minister to ignore the issue but much water had flown down the creek by then.

Kangana was asked not to return to Mumbai! The war of words that followed provided unusual entertainment to the people during corona crisis. Kangana hit back and declared that she would return to Mumbai soon. The way she arrived in Mumbai and exited the airport, I felt like I was watching a scene from a film. Escorted by armed commandos, she moved like a queen. The way she got into the car was testimony to the fact that she was neither under stress nor had any fear. When she reached home, she saw some portion of the office demolished. Immediately, she raised the issue of Kashmiri Pandits and established herself as a symbol of resistance to Shiv Sena.

Actually, there was no need for the Shiv Sena to give the kind of response it gave to her statement. A few days later, no one would have even remembered what Kangana Ranaut had said. In politics, especially when a party is in power, it should take every step with much caution and deliberation. The reaction to an action should be analysed. Many things have to be ignored. This makes sense, but the kind of reaction that came from Shiv Sena made Kangana ride on a wave of sympathy. On the social media, people are now asking the government as to what happened to the list of 4,000 illegal buildings prepared in 1992? Have they all been demolished? Have the thousands of other small illegal constructions been razed too? Social media is abuzz with reactions that such an action was taken against Kangana because she is questioning the government.

In politics, a true leader is the one who keeps an eye on every turn of event. On its part, New Delhi (the powers that be) grabbed the opportunity and jumped in, extending ‘Y plus’ security cover to Kangana. A tug of war between Mumbai and New Delhi was already going on. This gave the governor a chance to step in to lecture the state government. It is not usual that a prominent person like the governor intervenes in a matter like demolition of an illegal construction. The BJP has criticised Kangana’s statement about PoK, but has termed the demolition of her office an act of retaliation. Then the sages and saints of Ayodhya have come out in support of Kangana. Akhara Parishad president Mahant Narendra Giri and Hanuman Garhi’s Mahant Raju Das have warned that if Uddhav Thackeray comes to Ayodhya, he will face opposition.

In fact, there was no point in blowing the Kangana episode out of proportion. The Shiv Sena has always supported the Mumbai film industry and there is no harm in saying that it has always protected it. When the underworld dons like Dawood Ibrahim, Chhota Rajan and Ravi Pujari terrorised the entire film industry, the Mumbai police and Balasaheb Thackeray offered them full protection. Balasaheb left no stone unturned to rein in these criminal gangs. Matoshree became a place of reverence for one and all. Balasaheb supported all the artistes, new and old, alike. He had a deep and personal relationship with everyone. Uddhav Thackeray’s relations have also been good. In this background, one wonders what made the Shiv Sena government to turn a heroine opposing its action into a ‘hero’!

A young actress of the same Bollywood which has always been protected by the Mumbai police and Shiv Sena from the terror of the mafia, not only made a deplorable statement about Mumbai but also became a symbol of resistance to Shiv Sena. Had she been ignored, she would not have been riding the wave of sympathy today. 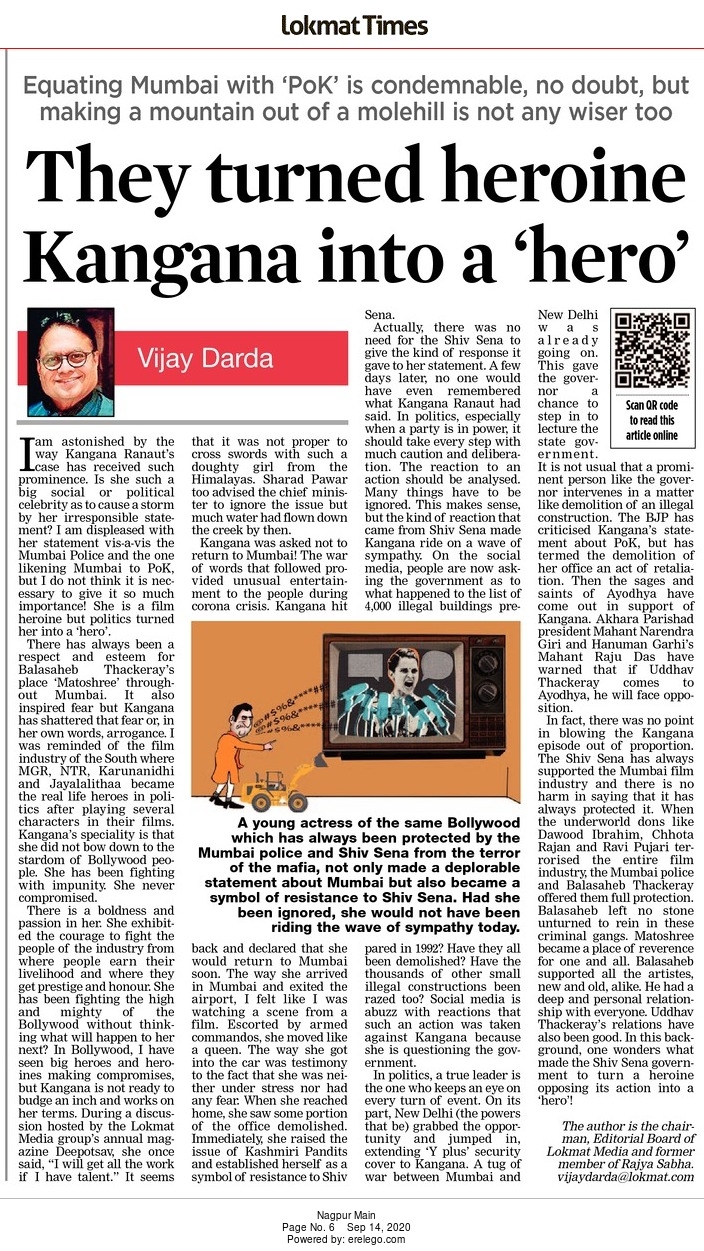