When I had called on Uddhav Thackeray, he had categorically stated that the chief minister would be from the Shiv Sena. “If the BJP does not agree, we can go with any party,” he had said and added that he will definitely fulfil the promise given to Balasaheb Thackeray about a Shiv Sainik getting to the post of chief minister of Maharashtra. When he said this I did not think that he would show that courage but he did it.

The important thing is that he did not want to become the chief minister himself and that is why he did not contest the Assembly elections. But the quirk of fate seemed to favour him and he emerged as the consensus candidate for the top job. Sharad Pawar and Mallikarjun Kharge, who are shaping the Maha Vikas Aghadi, clearly stated that the government will not be stable if Uddhav Thackeray does not become chief minister. Pawar Saheb and Khargeji had confided this to me as well. Obviously, a stable government is the goal of all, so he had to agree.

Whenever a new chief minister takes over, a round of discussion and analysis starts naturally among the people and the bureaucracy as to what is the vision of our chief minister? How much will his government live up to the expectations of the common man? Naturally, same is the case with Uddhav Thackeray. He is the chief minister of a new political coalition. Everyone has his/her own understanding and agenda, which everyone will try to fulfil, be it NCP or Congress! He will have to work in consultation with the NCP and the Congress. He will also have to face a strong opposition. Along with this, he will have to learn the skill to change the way the bureaucracy works to suit his policies and programmes.

He certainly has his own dreams about the development of the state, but only time will tell how much NCP and Congress share his vision. The Common Minimum Programme of Maha Vikas Aghadi has made many promises to the farmers and some promises to other sections of society as well but how will these be fulfilled? This is the real challenge because the financial condition of the state leaves a lot to be desired. There is a shortage of funds. A lot of work depends on the Central government. It will depend on how much support he gets from the Centre because the BJP government is ruling at the Centre with whom they fought the elections and there was a fierce fight over the chief minister’s post. BJP may not forget it! Similarly, how can Uddhav forget that BJP tried to eliminate Shiv Sena nor can he forget the kind of treatment that was meted out to him.

Well, the important thing is that the government should continue for five years. For this, he will have to make many compromises, and will have to sacrifice a lot. He carries a huge responsibility on his shoulders to keep the government intact. Comparatively, Devendra Fadnavis had few such challenges to contend with. Though Devendra Fadnavis did reach the chief minister’s post directly after being elected as an MLA, he had enough executive experience. He made his views clear with his work. There was no interference in his work, not even from Delhi. Delhi may not interfere in Uddhavji’s work, but many people from the coalition parties can put a spoke in his wheel. He has got veteran politicians to keep him company. It will be difficult to adjust the hopes and aspirations of all. I also want to tell him that to overcome unwanted interference, he will have to take some hard decisions.

He will also have to keep in mind that the good works of development started in the era of Devendra Fadnavis should continue undisturbed. It is expected that Uddhavji will definitely take these things forward. I would like to remind Uddhavji that he should pay special attention to the development of industries so that capital is created and employment is generated in the state.

There is no doubt Uddhavji will successfully steer the ship of the state because he takes every decision with a calm and thoughtful mind. He does not show unnecessary haste. This is his greatest strength. Besides, he is ably supported by his wife Rashmi Thackeray on every front. She has been walking shoulder to shoulder with her husband since day one. She is a very alert and talented lady. She has contributed a lot in chaperoning the Shiv Sena. She is certainly a great strength for Uddhav Thackeray. Therefore, let’s hope that our new chief minister will face all the challenges valiantly and lead Maharashtra on a new path of development.

Countless Acts have been enacted to prevent crime against women, but still the bestial violence against women has not stopped. A young female veterinary doctor in Hyderabad was burnt alive after being raped. Similarly, some goons gangraped a girl at the point of a revolver in Jharkhand. Such painful incidents are happening every day in one part of the country or the other. After all, how long will this orgy of inhumanity continue? The biggest question is why there is no fear of law? The law on rape incidents should be so strict that the trial should be held in the fast track court and the criminals should be punished as soon as the verdict is delivered.

The newly sworn-in chief minister Uddhav Thackeray certainly nurses a lot of dreams about Maharashtra, but the reality is that there are many challenges before him. Notably, he is a person who takes decision with a calm mind and after due deliberation. Therefore, let us hope he will be able to successfully steer the ship of the State. 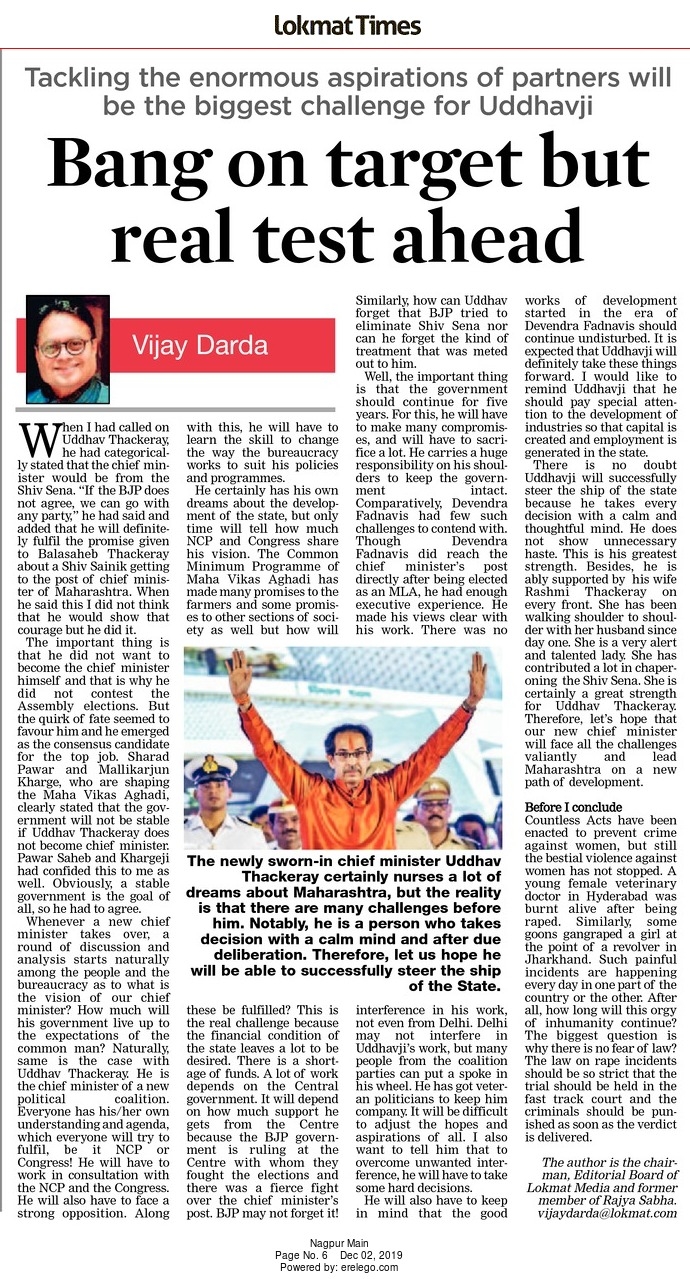 Post-election 2016: The bite of regional parties