Social and federal solidarity is our biggest strength, our enemies want to weaken it

Post-Pulwama terror attack, every Indian is angry. Whose blood is not boiling? Who is not in grief? Every citizen is deeply shocked and sad. Everyone wants that those who masterminded the Pulwama attack be taught a quick and stern lesson! Their anger is justified, but the manner in which some people have expressed this anger on the Kashmiris is absolutely wrong.

In the aftermath of Pulwama attack, the way the angry mob burnt dozens of vehicles in Jammu, attacked the people of the valley, kept Jammu city under curfew for several days is hardly justifiable. From Dehradun to West Bengal and Maharashtra, incidents of violent attacks on the people of Kashmir were reported. There are reports that some universities also expelled Kashmiri students. It culminated in finally the central government instructing the state governments that such incidents should not happen. Despite this warning, tragic incidents took place. After this the Supreme Court had to put its foot down. A bench of CJI Justice Ranjan Gogoi and Justice Sanjiv Khanna has issued notices to the states of Maharashtra, Punjab, Uttar Pradesh, Bihar, Jammu and Kashmir, Haryana, Meghalaya and Uttar Pradesh. Notices were also issued to the chief secretaries of West Bengal, Chhattisgarh and Uttarakhand, and the director general of police as well as Delhi police commissioner clearly instructing them that such incidents should not happen again at any cost.

The question arises as to what kind of ideology do those people who attacked the people of Kashmir after the Pulwama incident have? Don’t they understand that the general public of Kashmir is not responsible for terrorist attacks in Kashmir. Some misguided youths, may become stone-pelters after being influenced by Pakistani propaganda and vicious cycle, but the reality is that the common man of Kashmir wants peace and happiness.

If some misguided youths have taken to the path of terrorism, there are any numbers of patriotic Kashmiris who have been fighting for the country by joining the Kashmir police, the paramilitary forces and the Army. One does not know how many have been martyred in the last few years. When Sunjwan Army camp was attacked, five Kashmiri Muslims were among the seven soldiers who were martyred. Therefore, I request you not to suspect the patriotism of people of Kashmir. They are as intensely patriotic as you and me. Do not blame the whole state for the sins of few. Just last week, a crowd of about 3,000 Kashmiri youths had turned up for recruitment in Territorial Army. If you go to Vaishno Devi, who runs the horses and the pony riding service for weak and old pilgrims? They are all Kashmiri Muslims. Kashmir was once famous all over the world for its Sufiyana style. There was no trace of fanaticism there. Pakistan and its supporters first drove the Kashmiri Pandits from there in a bid to provoke the whole country and to create a rift in India’s social harmony on a religious basis. Kashmiri Pandits had to leave the valley but the country understood the Pakistani move and it did not have any effect on our solidarity. Every city has given shelter to Kashmiri Pandits. Fortunately, it did not generate a feeling of revenge against Kashmiri Muslims. Of course, it came as a crushing blow to terrorists and upset their plan.

Even today, we should work with the same kind of passion. We need to understand that our enemies want to create a rift in India’s social and federal structure. I have full faith that they will never succeed in their nefarious design. In India if people like Meghalaya governor Tathagat Rai support the boycott of Kashmir, the entire India stands as one to condemn and protest. They had to issue clarification. In recent years, the fanatic forces in our country have become strong but the common man of the country still believes in communal and social harmony. That’s why the designs of our enemies can never be successful.

We will have to showcase our social solidarity. Our armies will be strengthened on the border when we prevent spread of hatred and ill-will. Everyone in our country is confident that our Army will fight and eliminate each one of terrorists and one day Kashmir will again enjoy a pleasant climate of peace. Every houseboat at the Dal Lake will be full of tourists. People will enjoy Shikara ride. When tulips in Kashmir blooms, people from all over the country will flock there to see its beauty. The fragrance of Kashmiri ‘Kesar’ will once again spread in every nook and corner of India. Let’s hope fragrance of ‘Kesar’ will overpower the smell of gunpowder.

Misbehaviour with the people of Kashmir in some parts of the country in the aftermath of the terrorist attack in Pulwama is a matter of grave concern. The enemies of the country want that our solidarity should break and that there should be rift among us. My request is to understand this design of terrorists and be aware of it. 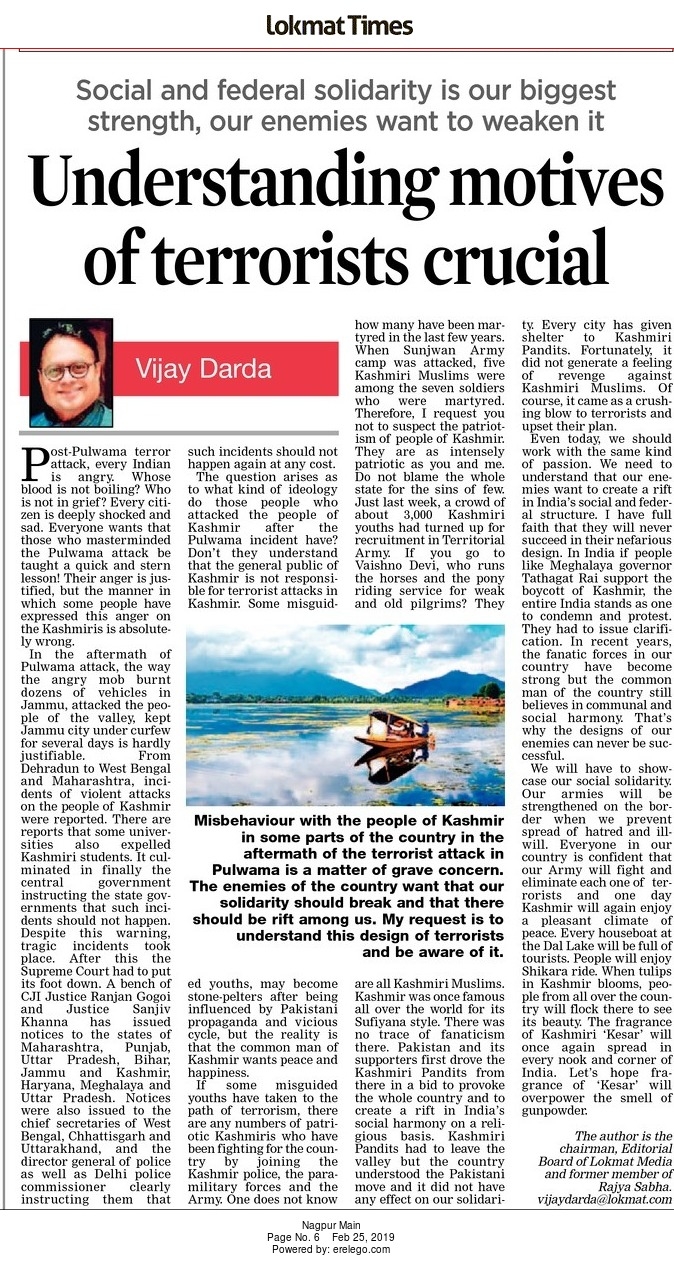