I am quite in agreement with the argument that we have over-blown the controversy surrounding the meeting between freelance journalist Ved Pratap Vaidik and the 26/11 terror mastermind Hafeez Saeed. By, we I mean the politicians and mediapersons. After all, journalists do meet all sorts of people, and it is also a fact that the shadier a person the better the story. So, if Vaidik on a trip to Pakistan did manage to find Saeed and have a chat, then in his own words those like the Shiv Sainiks who have been criticising him would welcome him with flowers ‘only if they knew the full details’ of what transpired between him and the terror mastermind.

Indeed, that is the core of the problem. A journalist goes to virtually forbidden territory, chats with the most wanted terrorist, and then there is no story. He does not write a story and instead after a few days, himself becomes the story. Mind you the picture of him sitting with the terrorist was released by him. There would have been no problem if the picture had come with the story that he promises would silence all his critics. After all the first and only obligation that a journalist has is towards the readers and he is expected to tell the story truthfully. But the tragedy of the entire episode is that even after all this ruckus has been raised, the gentleman has not thought it fit to write the story.

Then the second difficulty arose. A journalist is not supposed to be a player in the events that he watches and is ideally meant to be a disinterested bystander. But Vaidik transgressed this line in more than ways. He turned into an advocate for Saeed, and then a mediator of sorts in proposing a solution to the Kashmir problem, that goes against the well-established national position on this critical issue.

Indeed, in such situations all these problems arise when a journalist tries to wear two ill-fitting hats. He distorts his original hat that of a journalist and then dons the one of a peace-maker or a diplomat. Vaidik is 69 years old, and has a long standing experience in this field to appreciate that these multiple roles simply do not match. A diplomat by the very nature of his assignment has to maintain a low key presence and work behind the scenes almost in a cloak and dagger fashion, whereas the journalist puts all his wares in the public domain. Secrecy is the enemy of good journalism and is the prized possession of a diplomat. However, he did not practice his first art-journalism, and jettisoned the rules of the second diplomacy by going public with the pictures of his closed door meeting.

But then this is not an issue that is confined to just two private persons-Vaidik and Saeed. Or else it would not have mattered to anyone. Vaidik’s association with yoga guru Baba Ramdev is a matter of public knowledge. So, is the prime minister’s affinity with the yoga guru. Now to those who know Vaidik in person, he is nothing if he is not a glib talker. For him to endear himself to the powers that be in Pakistan on the basis of these two linkages is child’s play. Indeed, Vaidik had been peddling the yoga guru’s ayurvedic medicines and Saeed had been a trader in this stuff on the other side of the border, no one would have cared. However, the setting is completely different. There is a new government in our country and there is a huge curiosity in Pakistan about it as well as the prime minister Narendra Modi. Terror is the number one issue between the two countries that is preventing the normalisation of relations. Now someone who can market his perceived proximity to Modi has gone to meet the most wanted terrorist. As if this is not enough, the yoga guru has mischievously added that Vaidik met Saeed to ‘bring about a change of heart.’

The other thing that makes the entire affair fishy is the role of the two governments. Both the countries have washed off their hands from this Vaidik-Saeed meeting. They can do so in hindsight but their denials do not carry conviction. Of course, it does not make any sense for them to acknowledge that they had any role in this meeting, and it is better to describe this as an affair between ‘two private citizens’ as this approach shuts off all the other questions.

However, it reflects very poorly on the managers of the security and strategic affairs on both sides. The denials notwithstanding, this meeting could not have taken place without all the facilitation from both sides. Indeed, if they deny this facilitation, then these managers open themselves to the charge of incompetence. The next logical question would be as to what were they doing when this meeting was taking place? If the Indians claim that they were not aware then the danger is a very grave one. For yesterday it was Vaidik and tomorrow it can be some hardcore trained terrorist who would have a free run in Pakistan meet Saeed, and come back to launch a major operation.

The ‘protection’ that Vaidik is enjoying from the establishment and in it we must include the Rashtriya Swayamsewak Sangh as the key element also tells its own story. We have all witnessed the difference in the tone and tenor of their reactions in this entire episode. Gone is the shrill tone of disapproval reserved for those who engage with the Pakistanis. First they hailed Modi’s invite to Sharif as a diplomatic coup even before taking oath. Now they have endorsed Vaidik’s move to establish a friendly contact with Saeed, and this is like someone going for dinner in the camp of the traditional enemies. Naturally, they are proud that Vaidik has had a peek in the enemy’s den. If this is just the new beginning that has been promised by the new government, then this cannot be just the first step, and there would be many more to follow. 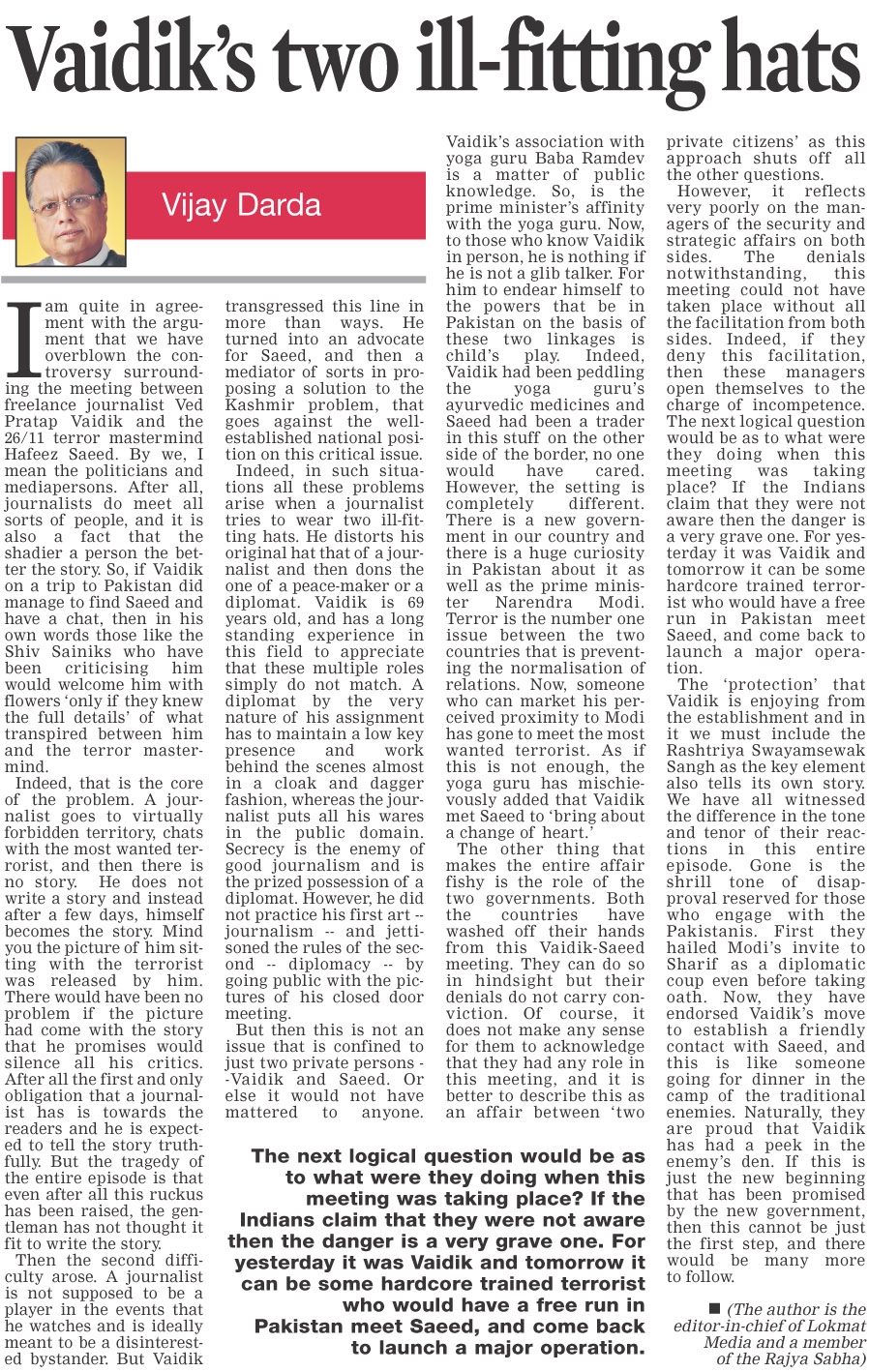