The AN-32 transport aircraft that vanished in Arunachal Pradesh over the region bordering China shortly after taking off from Jorhat in Assam last week still remains untraceable. There were 13 people on board. Earlier in 2009 too, a plane had disappeared in this area. An AN-32 also vanished from Port Blair in 2016. Both these planes have remained untraced till date. Imagine what would have been the reaction of Americans had such an incident taken place in their country! There would have been a public outcry. No surprise if the government would have fallen too! They value human life a lot but no one has raised any question in our country. The disappearance of the plane in today’s modern era and the inability to trace it with the help of technology is a matter of surprise!

Since the times of Jawaharlal Nehru, our slogan is arms for peace and this will continue in future too. Though we conducted nuclear explosion, it was only for peace. Then, our friend Japan banned us and I was also involved in the non-governmental team that went there to explain the peaceful purpose behind the nuclear project. But ‘Arms for peace’ does not mean that we remain weak and ignore the requirements of the Army. It is astonishing that in the modern era, we are mostly depending on the planes that were manufactured in 1960s and 1970s.

This is the result of not keeping pace with the changing technology. More than 500 aircraft of MiG series have crashed so far. Some 210 accidents involving MiG-21 alone have taken place. The MiG-21 is now being called a flying coffin. Look at the irony that we are still unable to get rid of it. It is always said that the aircraft are being upgraded but the question is, will upgradation alone work? The technology of the aircraft that was manufactured in the 1960s or 1970s has become obsolete. Even if you upgrade it with new technology, it will only become workable not sophisticated.

Anyway, India’s track record vis-a-vis upgradation leaves a lot to be desired. The aircraft which went missing belongs to the series of 100 aircraft we had bought from the Soviet Union long time back. They are 35 years old. In 2002, the question was raised whether AN-32 aircraft should be replaced or upgraded. You will be surprised to know that it took 10 years to decide on the upgradation. However, even the upgradation of all planes has not been carried out yet. The matter does not concern AN-32 only. Even the condition of older aircraft Hawker Siddeley Aveiro 748 is the same. It is dangerous to fly them because it is the 1960s plane and outdated. The file recommending their replacement is gathering dust for nearly 10 years now. The biggest reason for this is the debate on defence deals. Whenever there is a defence deal, the opposition parties raise questions. You will remember that during Rajiv Gandhi’s time, there was such a storm in the entire country over the Bofors deal that it ultimately toppled Rajiv Gandhi’s government. It is the same Bofors which won us the Kargil war later.

Naturally, if we do not strengthen ourselves in economic and defence matters, how can we protect ourselves? Today our Army does not have enough resources. If we compare only the Air Force with those of our neighbouring countries, it becomes clear that we are becoming weaker than the neighbours because the requirements of the Air Force are not being met. India has the sanctioned strength of 42 squadrons. But at present we have only 31 squadrons. China now has 42 and Pakistan has 22 squadrons. Defence experts estimate that if the planes are not purchased by 2022, we will be left with only 26 squadrons and Pakistan will have 25 squadrons. That means our position will be very weak.

When Atal Bihari Vajpayee was the Prime Minister, I had said in the Parliament that if we can not modernise our Army, why do we not dismantle it altogether? As it is in Switzerland! What purpose will the Army serve without modernisation?

Personally, I have never been in favour of war. I am a champion of peace, but in today’s era, if you do not have power, anyone will try to browbeat and arm-twist you. In our neighbourhood, there are countries like China and Pakistan which engage in open hostility towards us. Sri Lanka, Bangladesh and Nepal are no reliable allies too. In such a situation, we have to strengthen ourselves. Narendra Modi has won with a huge majority and he is capable of taking all kinds of decisions. I feel he should give green signal to all pending defence deals regardless of controversies. The first thing that needs to be done is to get out of the fear associated with defence deals. At the same time, in case of arms, we should adopt the path of Make in India. When we can send our satellite to Mars and prepare to land humans on the Moon, why can’t we produce sophisticated weapons! A strong will is all that is required!

We are in such dread of the controversies surrounding the defence deals in our country that any government irrespective of its colour is hesitant to take bold decisions. Our defence system is getting weaker. We are far behind the neighbouring China. Modiji has come back to power with a huge majority and therefore, he should modernise the Army regardless of the controversies. 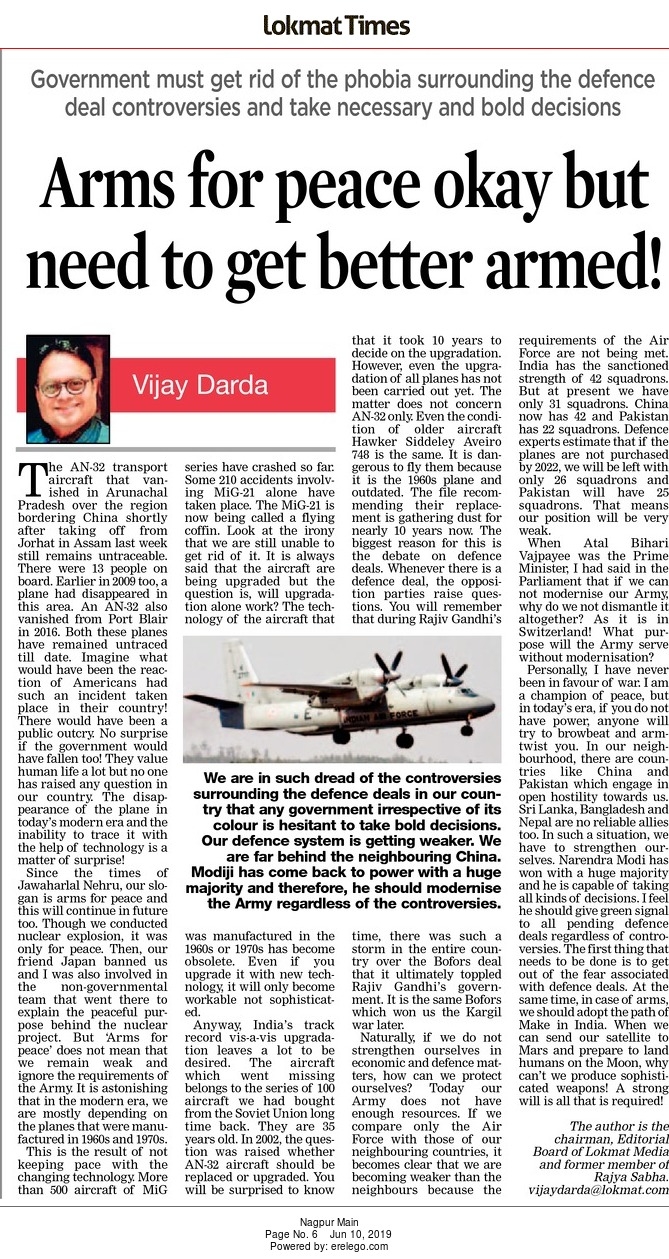 Looking ahead for smoother ride in 2017

Jet Airways crisis has put everyone in trouble