The chairman of editorial board of Lokmat Media and former member of Rajya Sabha Vijay Darda has invited the Vice President M Venkaiah Naidu to Yavatmal to unveil the statue of Mahatma Gandhi and dedicate Veenadevi Darda Day Boarding School and Jawaharlal Darda English Medium School to the people. The Vice President Naidu has expressed his willingness and a date for his Yavatmal visit will be finalised in the next few days.

Darda on Tuesday called on the Vice President at the latter’s official residence and apprised him of various initiatives in Yavatmal. He said Hanuman Akhada at Yavatmal was an important centre during the freedom struggle. Many leaders of the freedom struggle including Subhas Chandra Bose, Lokmanya Bal Gangadhar Tilak, V D Savarkar, Mahatma Gandhi and others visited Hanuman Akhada. During his visit, Gandhiji had written in the visitor’s book of the Akhada, “I want development of this Akhada.”

This Akhada has completed hundred years of its existence. But due to Covid-19, no programme or activity could be organised there during the pandemic period.

However, the Akhada management has got a 9-feet bronze statue portraying Gandhiji absorbed in writing sculpted by the eminent sculptor Padma Shri Ram Sutar. Darda requested the Vice President to visit Yavatmal to unveil this statue.

Apart from this, a state-of-the-art Smt Veenadevi Darda Day Boarding School has been constructed at Yavatmal at a cost of `30 crore. Similarly, Jawaharlal Darda English Medium School has been built at Hindi High School, Yavatmal. Darda urged the Vice President to dedicate both these schools to the people too during his visit.

On this occasion, Darda presented to the Vice President the book titled ‘Majhi Bhint’ authored by the editor-in-chief of Lokmat Media Rajendra Darda. 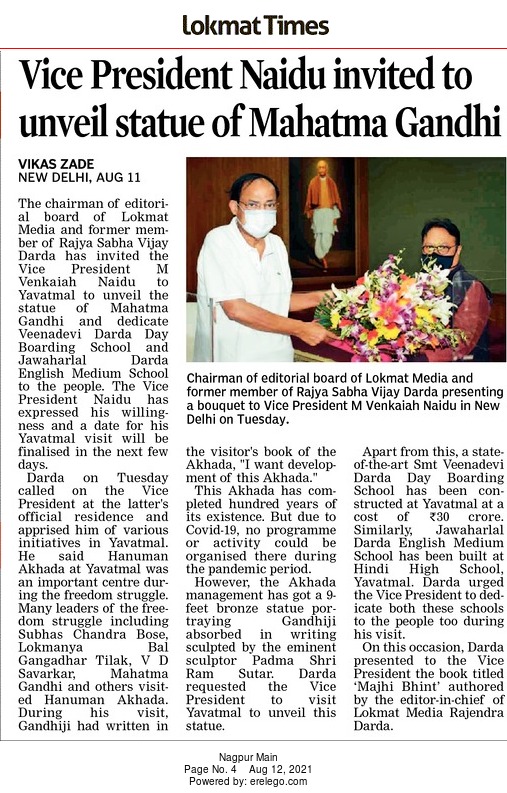 Make Marathi compulsory from I to XII std in Maha