All principles and morals apart, there is no doubt that life is unfair. All of us are not equal at the hands of fate. There are every day experiences in our life trajectories to substantiate this proposition. We often take cover under the expression ‘individual destiny’ to come to terms with this reality. We know we are all separated by various criteria. The differences are real. Salman Khan is undoubtedly blessed with superstardom. He is the object of celebrity worship. He is not really an ordinary Indian citizen. For all intents and purposes, he is a special one. Besides millions of his fans all over the globe do not really want that their favourite star should languish in jail for a five-year term.

Having stated this, I must in all candour admit that for us as a family he has been a big support. He has responded warmly to our invites at public functions. He has been generous enough to spare valuable campaign time during elections. In that sense, we are happy that he has been spared the mortification of jail time after his conviction in a hit and run case. But we must remember that the hit and run case involving Salman, is not just about him going to jail or getting exonerated. It is about our system of justice and the way in which we manage our road transport system.

Now, judge Deshpande has convicted Salman for culpable homicide not amounting to murder and sentenced him for 5 years. It took 13 years to come to this verdict. Then within two days, he got bail, and the sentence got suspended. Questions are raised in the public domain, about his getting special treatment at the hands of the judiciary. Let us not forget that judicial leniency is a function of wealth, clout, and stardom. India is not unique to this judicial leniency. Even Hollywood stars are known to enjoy this facility.

It is not just Bollywood stars, but even others who have the means to influence the system who are often swallowed by their attitude that they can fix everything with their monetary clout. The system did catch up with Salman, as it did with other notables like once mighty Sahara empire chief. “We can fix everything” is an attitude that just does not work always, and the sooner the elite realises the limitations of their powers, the better it would be for their elitism to sustain its myths of invincibility. The higher you climb on the ladder of superstardom the more vulnerable you are.

High profile cases do get influenced by public perception and in Salman’s case the touchstone for the judiciary has been whether he gets punished or not? So, there is a general appreciation that at least a court has had the courage to pronounce that he is guilty. Well, if the high court has subsequently suspended the sentence and freed him on bail, the matter is just procedural. But legally speaking, this litigation against Salman is far from being an open and shut case with everything crystal clear as daylight. As the defence challenges the prosecution story, the case is sure to go through a few more judicial revisions. Howsoever meticulously judge Deshpande would have examined the evidence, it is by the nature of judicial process, subject to revision. Now, we are at this stage of the process. But there are two things that must be set aside. We must not confuse a court verdict with justice. A court order is within the legal framework, and justice has a moral dimension. The twain seldom meet. From all standpoints, the Salman hit and run case is a prefect embodiment of this dichotomy. Can we say that the sentence of five-year jail term does justice to all concerned? Or at the end of the day we are still left debating on issues?

This is the stage at which we come to the larger humane question of innocent deaths on roads. By a conservative official estimate more than 1.50 lakh persons die on our roads every year. The number of people injured and maimed is more than three times this figure. We have an abysmal conviction rate for errant drivers — hardly 13 per cent in the best of the states. Drunk driving is a common malady. Overworked truck drivers who fall asleep on the wheels is another problem. There is some ray of hope now that our own Nagpurian Nitin Gadkari is the minister for road transport and is seized of the problem. But the proof of the pudding lies in eating. A proper diagnosis of the problem is just the first step towards resolving this mammoth human tragedy that shatters millions of homes every year. But putting in place the right solutions and implementing these to last mile are a tall order. In this backdrop, sentencing one superstar for errant driving could be talked about as exemplary punishment, but the dangers of overdoing this bit of teaching a lesson should not be overlooked.

The larger issue relates to the investment of resources in making roads safer. As a nation we cannot be accepting a situation that it is passe if people sleep on roads and pavements. The government has the basic responsibility to provide ‘roti kapda and makan’ for every citizen. Unless the administration rising from the local municipal level and going up to the state and the Central governments, does not embark upon a strict drive to ensure that all the poor have adequate shelter they will not only remain vulnerable to drunk drivers, but also to all sorts of dangers that arise from sleeping in unprotected locations. Ensuring shelter for the poor should emerge as the largest concern from the Salman case; if the debate has to move from mere words to action.

This is a question that bothers me no end. As the tragic news of a suicide pact at the Sports Authority of India (SAI) training facility at Alappuzha makes headlines, the uppermost question is when are we going to mature as a sporting nation? Are we so incompetent that we cannot even treat our sports persons with care, dignity and respect? It does not require much imagination to have an idea of the conditions in which these trainees must have been kept so that they were driven to the point of suicide. Forget the objective of promoting excellence in any form of human endeavour, the conditions were such that these trainees were convinced that life itself is not worth living. We have a government at the Centre that keeps promising us every day of the changes it would bring about. Can it ensure that our sports administrators and coaches behave at least like better human beings? 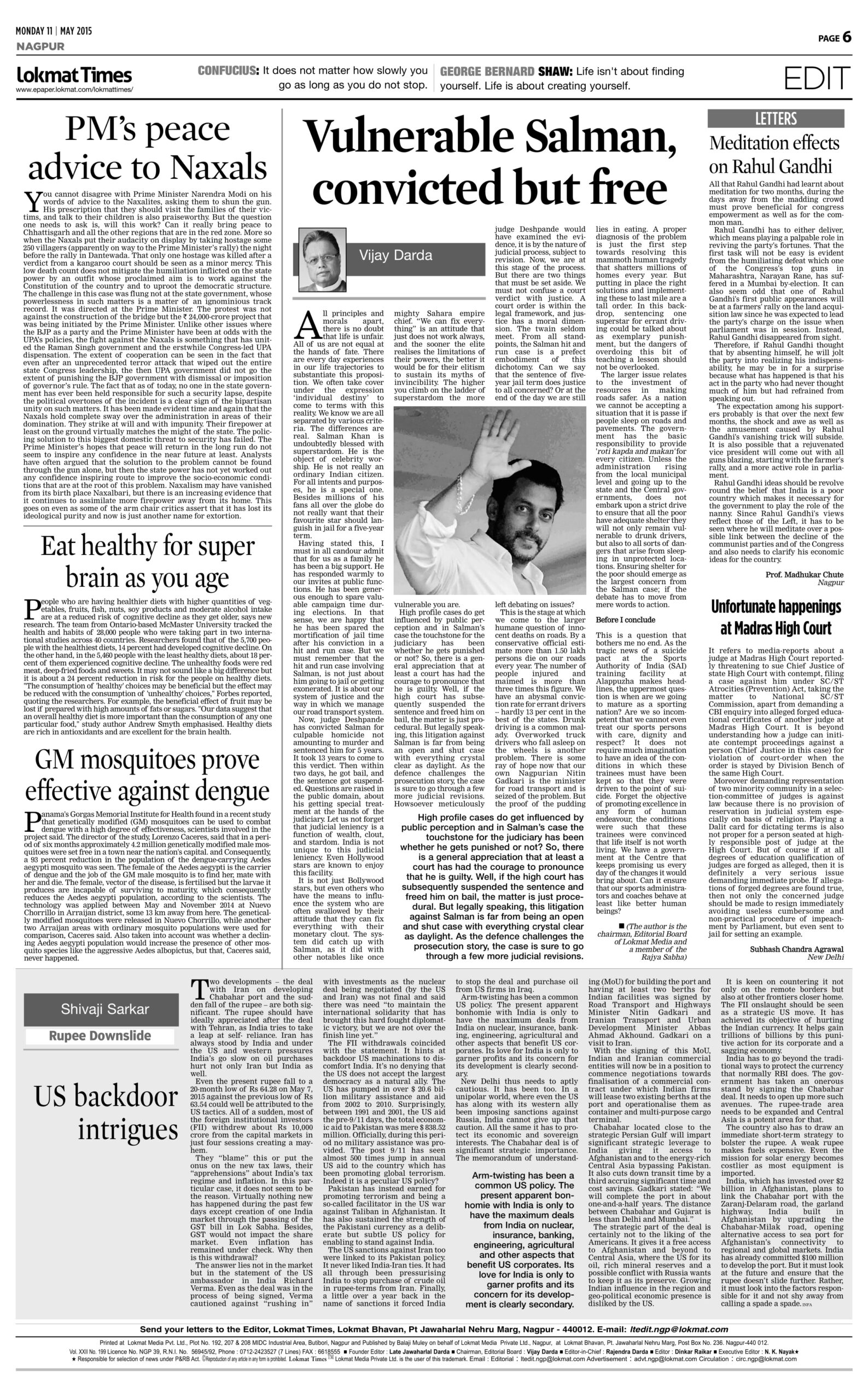 Did country dream of such a democracy?