In Nirbhaya case, the Supreme Court confirmed the death sentence of the culprits in May 2017. Why so much delay in its execution?

Some seven years back, a 23-year-old student of physiotherapy was gangraped on the night of December 16, 2012 in a moving bus in the country’s capital Delhi. All the six vile creatures raped her and brutalised her body with an iron rod! Her male companion was badly beaten up and the convicts then threw them both along the roadside and escaped. Later, the girl had died. The country rose in anger and protest. The victim was named Nirbhaya. The crowds of protesters hit the streets and demanded death for the culprits.

Unfortunately, these vile creatures are still alive. The court had announced a date that the four surviving culprits would be hanged on January 22, but their lawyers again found a legal loophole and got the execution postponed. The new date has now been declared. It is February 1, 2020, but the country is not sure that on that day these culprits will go to the gallows. Reason is an apprehended loophole being exploited by their lawyers to buy more time!

The following day after that horrible night of unimaginable torture, the police caught the bus driver Ram Singh. Soon his brother Mukesh Singh, gym instructor Vinay Sharma, fruit seller Pawan Gupta, bus helper Akshay Kumar Singh and a 17-year-old minor were also arrested. Ram Singh died under suspicious circumstances in Tihar Jail on March 11, 2013. On August 31 of the same year, the Juvenile Justice Board convicted the minor accused and sent him to a child remand home for 3 years. Now he is roaming free. The country has still not been able to forget the fact that even though he was younger of the lot, his brutality was more than that of a dreaded criminal. Everyone in this country is of the opinion that he should be hanged too!

After this only one culprit filed a mercy petition. It was sent to the President on December 6 last year and recommended to be rejected. The mercy petition of only one culprit meant that the other guilty could waste more time for such a plea. Finally, on January 7, 2020, the death warrant of the four convicts was issued after Nirbhaya’s mother filed a petition. The date of January 22 was set for execution. After this, the curative petition was filed. That too has been dismissed and a new date of February 1 has been given but the question what is the guarantee that such hurdles will not be created by the convicts before the date of execution? The apprehension is justified! Hearing the petition filed against the first death warrant, the High Court has also made stern observations.

The court has said the accused of Nirbhaya are cleverly misusing the rules and the system has become cancerous. People will lose faith in the system! Nirbhaya’s mother’s comment is also worth noting that the system is blind and helping the culprits. It is pertinent to ask as to why the Parliament does not pass any legislation to prevent such criminals from taking advantage of this kind. Why do our MPs not raise their voice on this serious issue instead of creating ruckus on unnecessary issues. After all, our judicial system has to work according to the laws that the Parliament passes. The MPs and Parliament should take such steps immediately to end the confusion.

In this context, I would like to point out that there are some 3.5 crore cases pending in the courts. However, after so much uproar, the people sitting in the government and the agencies that make the law should better think together and find out how to end the legal lacunas. How the judicial process could gain momentum! According to the report of the national court management, the number of cases has increased at double the speed in the last 30 years. If the situation remains the same, the number of pending cases will reach 15 crore in the next 30 years. The figure is frightening and everyone should seriously think how the country can get speedy and smooth justice!

The manner in which the perpetrators of the Nirbhaya incident have taken advantage of the loopholes in our judicial system is sad and unimaginable. Our governance and judiciary should pay serious attention to how these loopholes could be ended. 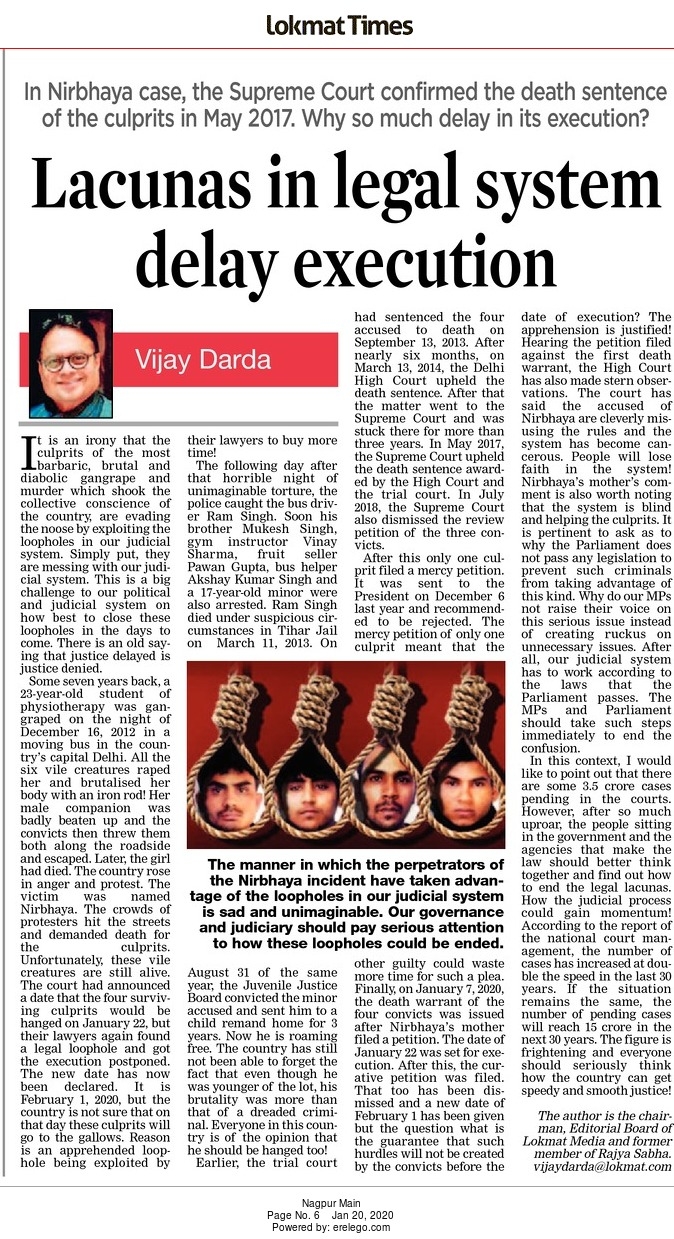