The highly commendable initiative by Pakistani PM to improve relations should not be overshadowed by India’s electoral politics.

Pakistan’s prime minister and ace cricketer Imran Khan has been in power only for three and a half months now but the kind of passion and commitment he has brought to his job is admirable. Especially in the context of relationship with India, he has been taking special interest and expressed his wish to improve ties with India. Immediately after becoming the prime minister, he had said that he wanted good relations with India. Laying the foundation stone of Kartarpur Sahib corridor in Pakistani territory last week, he reiterated his resolve and said Pakistan will take two steps if India took one to improve the relationship.

This statement of Imran Khan has evoked widespread reaction in India. It is being reminded how the former Pakistan rulers have always tricked India, and therefore, how can Imran be trusted? Pakistan should first eliminate from its own soil terrorism which has specifically targeted and troubled India. Only then can there be further dialogue. I believe that Imran’s comparison with earlier Pakistani dictators is not appropriate. Look at Imran’s cricket career or political career; there is no instance when he has betrayed anyone. His career is there for all to see. He is a great cricketer of his time and he is respected the world over for it. He does not need to fall into the cesspool of politics as he entered politics to improve the condition of his country.

After coming to politics, he has talked about the Kashmir issue many times over but has never expressed hatred against India. The other dictators have been doing all this but not Imran. This gentleman knows that if there is friendship between the two neighbours, both of them will benefit. The economic condition of Pakistan which he inherited is very fragile. The treasury is empty and the Pak rupee is declining every day. He knows that he is the prime minister of a dismal economy. Friendship with India is going to be beneficial for him.

The problem is that in India, a particular ideology has been trying to spread the message that Imran is under the thumb of fundamentalists. The reality is that Imran Khan is constantly battling with the fundamentalists in Pakistan. The fundamentalists did not want him to win the elections. Just three days back, Imran had clearly stated that Pakistan will not allow its territory to spread terrorism in another country as it is not in the interest of Pakistan. Obviously, he is trying to circumvent the terror bosses. Not only this, Imran has also opened an aggressive front against corruption. He is speaking out freely and frankly. Yes, it is true that he has not said anything against the Pakistani army. It is no rocket science to understand why he has kept mum. The army is so strong and it has such a strong grip on Pakistan’s socio-economic condition that it will take a lot of strength to take up cudgels against it. It will take some time for Imran to rise against it. You would be surprised to know that about 30 per cent of the industry is controlled by the army. Especially the cement and steel industries are in the possession of army officers. The army exercises a lot of influence over the system. The Damocles sword always hangs over the elected leader.

Despite all this, Imran has taken an honest initiative of friendship with India. The problem is that in India this initiative is being seen differently. Just as opposition to India is considered to be the guarantee of victory in the Pakistani election, similar efforts are being made to create such an atmosphere in this country ahead of elections. We are going to have Lok Sabha elections in 2019 and the environment against Pakistan can benefit some people. I think that the country should always avoid such elements. Not only did Atal Bihari Vajpayee undertake the initiative of friendship with Pakistan, but even Prime Minister Narendra Modi had taken a good step by going to Pakistan and meeting the then prime minister Nawaz Sharif without invitation. Unfortunately, we could not move forward on friendship. But an opportunity has come again. If Imran Khan has expressed his wish for better relationship, India should also go ahead and seize this initiative. It is not wise to let the past failures hinder the new initiative!

There is no doubt that earlier Pakistani dictators have tricked India time and again in the name of improving relations. But the present prime minister of Pakistan Imran Khan sounds serious and reflects sincerity of purpose. He wants better relationship between the two countries. We should respond positively. 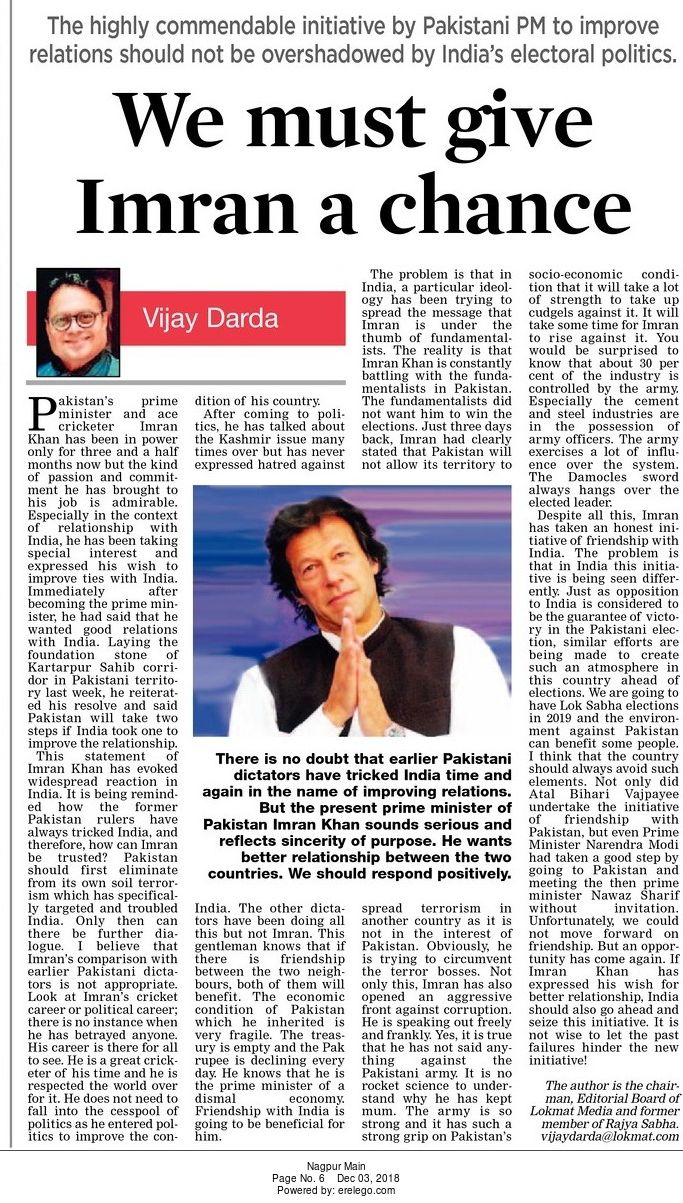