When will you change, when will the country transform?

I salute and bow down to the legendary sprinter Milkha Singh who got the sobriquet of Flying Sikh. On his departure, two thoughts come to my mind. First, will we ever see a runner like him again? And the second, when will Milkha Singh’s unfulfilled dream be fulfilled? He had a dream, that one day an Indian will win an Olympic gold medal! I wonder whether true tribute can be paid with an unfulfilled dream!

When Milkha Singh ran in the Commonwealth Games and set a record that remained unbroken for 40 years, he did not have the resources. He faced immense hardship. He didn’t have a good pair of shoes. The concept of nutritious food was totally unfamiliar then. He used to run barefoot during practice. Yet he excelled, all these difficulties notwithstanding. His wife Nirmal Kaur was the captain of the national volleyball team and son Jeev Milkha Singh is a professional golfer. Milkha Singh always regretted why no Indian could win a gold medal in the athletics section in the Olympics. This regret became his dream. He would always express it. Unfortunately, this dream could not be fulfilled during his lifetime. After his death, the country is invariably remembering his dream and his contribution to sports. The entire country including the President, Vice President and Prime Minister has paid tribute to him. I think the real way of paying tribute to him will be to fulfil the dream he saw all his life. The nation should remember the blisters on his feet when he ran barefoot so as to groom an entire generation of sportsmen. Like Milkha Singh, it was Dhyanchand’s dream too that India should become the world champion in hockey again.

Actually, to fulfil the dreams of Milkha Singh and Dhyanchand, we have to work together on many fronts. First of all, we have to understand that sports is not just a means of enhancing physical ability. Sports are directly related to our patriotism, our self-respect, our progress and our nation’s pride. Remember that when the tricolour flies high in the celebration of victory and when the tune of Jana Gana Mana is played, we are thrilled to the bone. Tears of joy flow from the eyes of the winner. It was the dream of Milkha Singh to celebrate victory in the Olympic arena and hold the tricolour high to the tune of Jana Gana Mana.

Of course, the atmosphere is changing now. Kiren Rijiju is a very competent minister. He wants that an environment of sports should be created in the country. Children who have abilities should get opportunities. It can be said that the government seems to be becoming conscious about sports; the government has started to think that it should spend on sports, but the atmosphere is still not so positive that we can produce another Milkha Singh again. If we really want to create and train a generation of players, we have to learn how children are spotted and groomed by China, Russia or Croatia. Today the players of these countries dominate the playground, and the commitment of the government there is the biggest reason. I remember, I was watching a World Cup match. When the Croatian football team won, their President Colinda Graber walked into the dressing room and hugged the sweaty players and kissed them. When will our players experience such a moment?

We are all witness to the state of affairs about sports in our country. >From the schooldays itself, we should keep in mind and identify which child has the potential for which sport. They should be selected there and their training should start. But today, our children are away from the playgrounds and remain obsessed with mobile phones. Neither the parents care much nor our government. Children’s playgrounds are also shrinking. Concrete jungles are encroaching upon them. If Saina Nehwal has risen from amidst us and made a name for herself today, the government has no contribution in it. This is the result of the determination of a mother who trained Saina from the age of five with a pledge to make her a world champion.

Saina Nehwal’s mother Usha Rani Nehwal was seven months pregnant and still played a local match. This shows her passion. Be it Saina Nehwal, Sania Mirza or Mary Kom or other players like them, all of them have been able to excel on their own strength and determination. Many people have potential but they do not get opportunities due to various reasons. Politics has to be kept away from sports, only then will success be achieved. Sometime back, I had heard that Maharashtra’s shooter Anjali Bhagwat, who earned a name in the world, faced a lot of harassment. Many such incidents keep coming to light. If incidents like these happen, why would anyone make sports his or her career?

Spotting and grooming children with potential is not an impossible task. It just needs perspective. You spot the children and give the responsibility to the industrial houses to mould them. Yes, it will be very important to keep in mind that the government does not interfere and the industrial houses should get full freedom for this purpose. And of course, also ensure that the craze for cricket should not destroy other games. We have to understand that cricket is not a national or international game. It’s neither in the Olympics nor in the Commonwealth Games. This is a club game. But cricket has become a religion in India. Given the amount of money cricket has, it has its share of controversies and scandals too. I would not like to discuss any of them. All I have to say is that to fulfil the dream of Milkha Singh and hold the tricolour aloft in the world of sports, we need to create enthusiasm, passion and love for sports among the children.

And finally, the only question to the system is when will you change, when will the country change, and when will this dream come true? 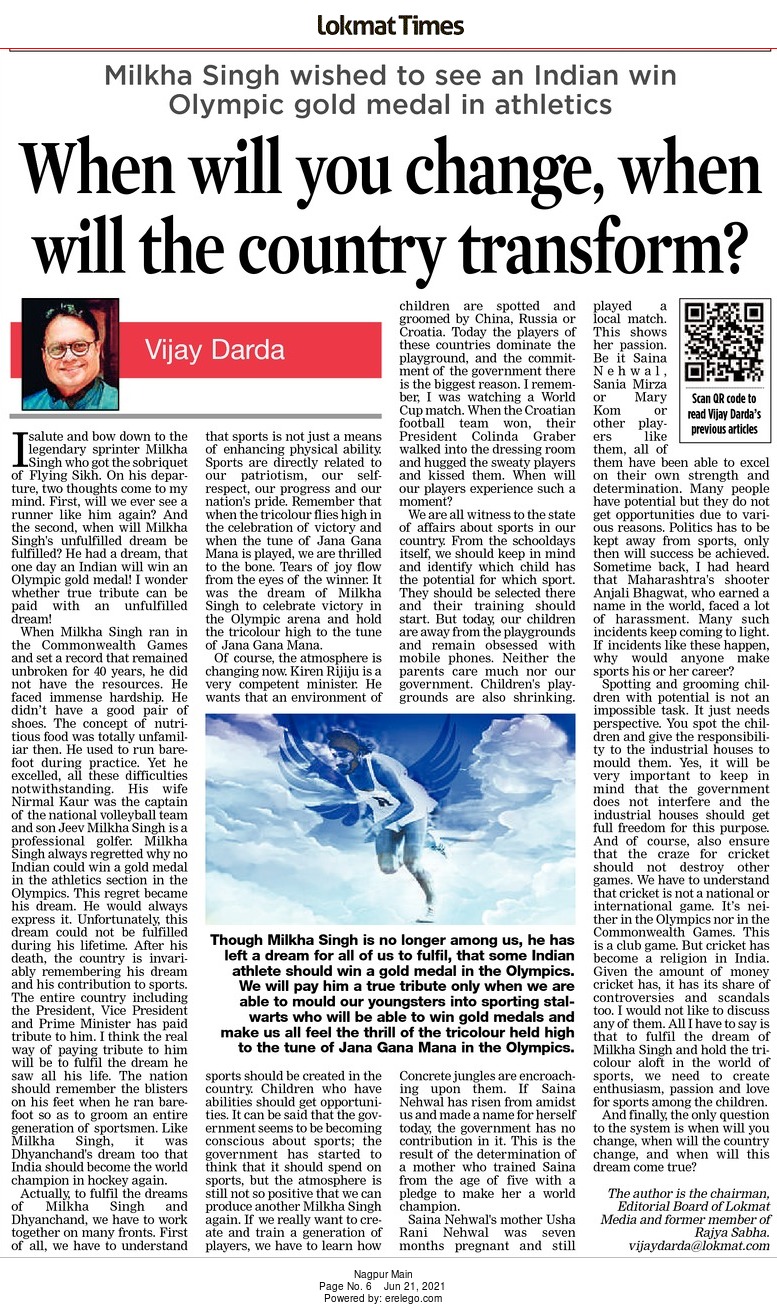 Let us come together to fulfil our hopes