If you go by the first week of the Budget Session for the Modi-led NDA government, then the set of disappointments over the much touted ‘acche din’ among various segments of the population is clearly understandable. The rail fares have gone up, food and vegetable prices are running high, and the budget is already being pilloried as some sort of a Jaitley version of the Chidambaram ideas. Surely, this is not the sort of change the people were expecting when they voted for Narendra Modi as Prime Minister. Not just the average Indian citizen, even the staunch Modi “bhakts” are feeling let down. There is a sobering thought, these are early days and there is a huge negative UPA legacy. Besides, you cannot expect to right all the wrongs within the first month of a five-year term.

But then it is also too soon to forget the campaign rhetoric which was high on both rubbishing the Congress performance and raising the expectations from abki baar Modi sarkar. The promise held out at that time in unequivocal terms was that come ‘Modi sarkar’ and everything will be sugar and honey. No one spoke of bitter pills. Much less did anyone say that dear fellow citizens ushering in an era of sweetness all around would take time. Perhaps it was assumed that the experienced citizens knew everything about the difference between electoral promises and the performance of a government.

So, it would be fair to assume that both Sadananda Gowda’s Rail Budget and the erudite lawyer Arun Jaitley’s first essay in budget making are carrying the heavy burden of expectations. Indeed, the underlying theme in these twin exercises is the need for continuity in governance. This is actually a healthy national principle, that usually gets lost in the noise and din of partisan politics. However, it is something that lends stability and strength even if it arises from the compulsions of the situation. For instance, the rail minister had no options but to raise fares in order to lend a semblance of balance to the financial health. But then he too came with a great diagnosis of the railways malaise without offering a long term solution. He did hit the nail on the head when he pointed out the paradox that a monopoly business which has millions of customers who pay upfront was running into losses. Now, the 14.2 percent fare hike is surely oppressive, but imagine if it had been phased out at a rate of 2 percent per year over a decade, then it would not have been so hurtful. But as this was not done, there is a rationale for a hike and the same was used by the previous UPA government. So, this continuity does make sense.

The same continuity principle works for Jaitley when he retains all the major fiscal targets like bringing down the fiscal deficit to 4.1, and broadly adheres to the fiscal consolidation plan etched out by his predecessor Chidambaram in the interim budget. The BJP may have lashed out at Chidambaram at that time, but then Jaitley is too much of a realist and pragmatic man in governance to snap from the past and then risk the attendant uncertainties just for the sake of being different. His approach on the issue of retrospective taxation is also the same. True, the BJP’s political noises before they came to power did give an impression as if this law would be scrapped, and the Vodafone case that has triggered all the corporate unrest would meet an end in favour of the company. But that was a case of heightened expectations. He has reassured the business community that retrospective tax laws would be devoid of fresh liability and that should satisfy them.

If the Indian economy has been sluggish in the second term of the UPA, there are domestic and external factors. The domestic factor being the caging of the entrepreneurial spirit due largely to the problems of environmental clearances, lack of coordination between the state and Central government and a ham-handed approach both on the front of the regulatory and monitoring agencies as well as the courts. This is both a question of the political will of the government and above all its negotiating skills with all the stakeholders — the corporate investors, the regulators, the courts and the state governments. Jaitley’s budget seems to have restored this confidence, and created an environment in which the journey back on the growth path can take off. He has rightly pointed out that this is a directional budget, and over the next three to four years, the economy should have 7-8 percent growth.

The key challenge in India is to bridge the gap between the two sides –there are $250,000 millionaires and one in every three Indians is below the poverty line drawn freshly by the Rangarajan Committee at Rs 32 per day for rural areas and Rs 47 per day for the urban areas. The gold imports every year are in the range for Rs 250,000 crores and the non-performing assets of the public sector bank are Rs 274,000 crores. The contrasts on two sides with gold the ultimate sign of prosperity and the NPA’s the surest sign of economic failure and the parity between the figures only underscore the parallel nature of this divide.

Another key paradox is the fact that about 21 million expatriate Indians remit about $ 70 billion annually, and hidden in this impressive figure is the plight of the unemployed Indians like nurses who have to seek jobs abroad in dangerous situations like that of Iraq because they do find gainful employment in our country. So, Jaitley can earn the foreign exchange by making exports more lucrative, but can he find the jobs for the millions of Indians who actually voted with that sense of hope for the change that brought Modi and co. to power. It needs to be pointed out forcefully India has never had any dearth of ideas, the problem has always been in finding the right ways to implement these. Both Gowda and Jaitley now have the luxury of time at their disposal to translate their ideas into tangible projects creating assets and jobs over the next year, and then the evaluation of their budgetary performances would not be on expectations but on the results delivered. That would be much harsher than the mere burden of expectations. 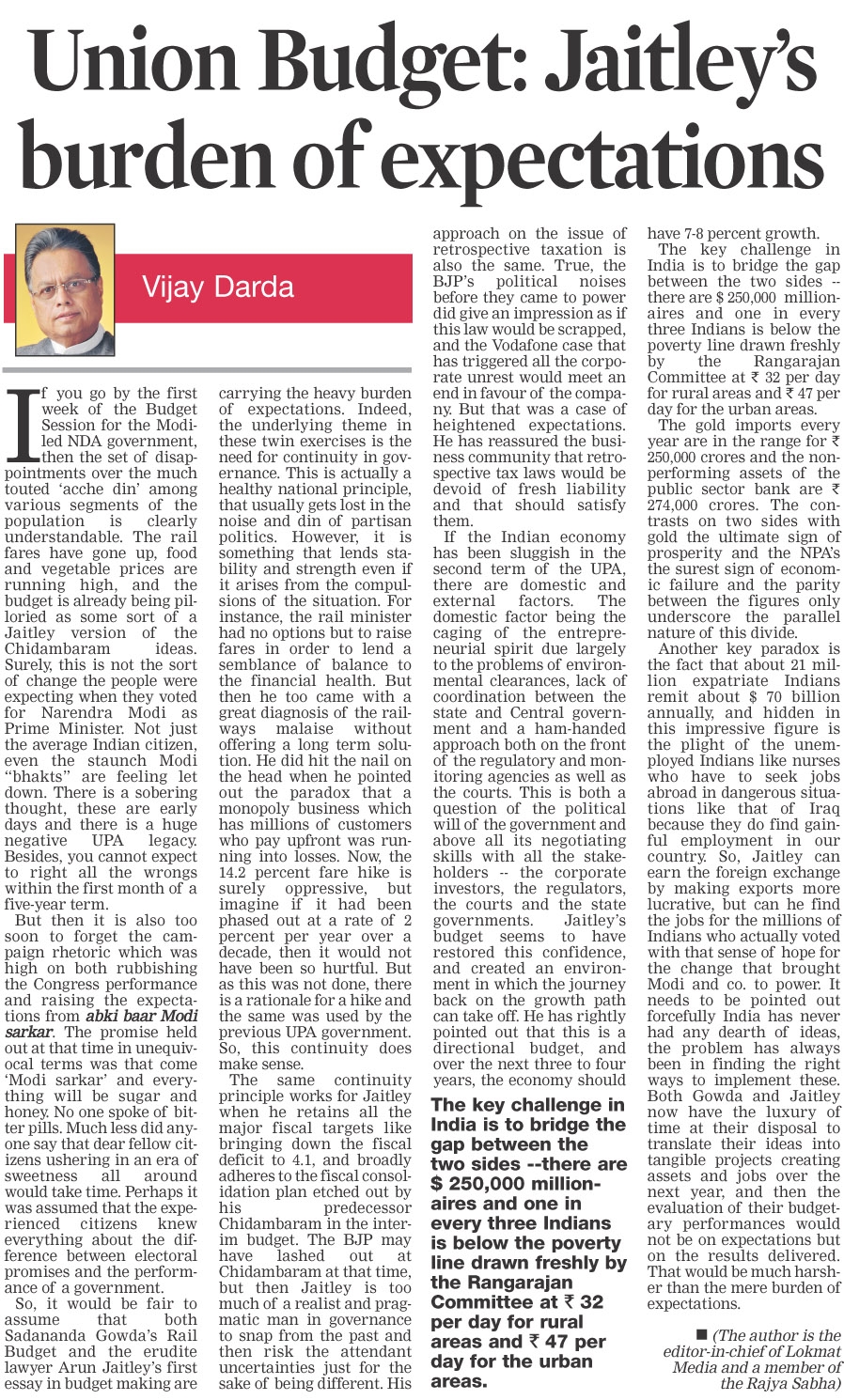