Why are Babasaheb’s dreams still unfulfilled?

Indian civilization is so great and noble that even gods and goddesses living in heaven envy it and desire to be born here! A legion of great men and spiritual avatars were born in this holy land in various eras who contributed to enhance the glory of India. But I would like to mention two great men in recent history. One of them is Mahatma Gandhi and the other is Bharat Ratna Dr Bhimrao Ambedkar, fondly called ‘Babasaheb’. Gandhiji freed the country from slavery with the weapon of non-violence. He imbibed the thoughts of Lord Buddha and Lord Mahavir and shaped the life of the common man through the noble virtues of non-violence, renunciation, forgiveness and non-possession. Many countries have become independent by treading the same path. Ask the people of China and Russia the importance of freedom and you will know how precious it is.

Babasaheb underlined and explained the importance of freedom to the common man. He thought over the needs of the common man. The common man wants that his country should be free and every person in the country should be protected. He wants to breathe free and exercise the freedom of expression. All these things have been bequeathed to us by our Constitution. The Constitution paves the way for our life and imparts direction to the development of life. Babasaheb framed the Constitution of India by taking all these factors into consideration and showed the way to create a hatred-free society. No injustice should be meted out to anyone in the name of either caste or religion or language. He has shown a perfect way of living whereby man can develop himself in perfect freedom.

The million dollar question today is why Babasaheb’s dreams of establishing an egalitarian society as enshrined by him in the Constitution and a caste free India are still unfulfilled? Who is responsible for it? Is it the government, society or our whole system? Today is Babasaheb’s ‘Mahaparinirvan Day’, so this question is again staring in the face of the whole country. Last week, when the Union minister of state for social justice and empowerment Ramdas Athawale informed the Rajya Sabha about the number of people still forced to do manual scavenging in the country, I was terribly shaken. As many as 43,797 people are still engaged in manual scavenging work and of them 42,594 belong to the scheduled castes! No doubt the evil system of manual scavenging is coming to an end, but as long as even a single person is compelled to do so, it is a matter of shame, a defeat, a social exploitation and a blot on our scientific society.

Babasaheb knew that as long as there is a caste system in India, the country’s overall development is not possible. But the reality is not hidden from anyone. Even today there are reports of harassment of Dalit brethren. The vibes of caste are still around. If you analyse the National Crime Records Bureau (NCRB) data of the last 5-7 years, you will find that more than 120 cases of atrocities on Dalits are registered daily. If the number of cases being registered is so high, imagine the number of incidents that go unreported. Even today the incidents of preventing Dalits from drawing water from upper caste community wells and preventing them from entering the temple take place. Incidents like attacking Dalit bridegrooms for mounting a horse during marriage procession keep occurring! There are hundreds of incidents of honour killing every year. Even today in the rural parts of North India, villages are delimited as per caste demography. The Dalit settlements are usually located on the outskirts of the villages.

No political party ever gets tired of taking Babasaheb’s name and paying lip service to his ideals, but none of them has a roadmap to follow his path of social equality and justice. Over the years, many political leaders who played politics in the name of Babasaheb became millionaires and billionaires, but the person whose upliftment Babasaheb always advocated for, is still awaiting development! Today we are celebrating the Amrut Mahotsav of India’s Independence, but the people of independent India could not get the Amrut of an egalitarian society!

In the name of Babasaheb, we have established humongous institutions, built roads, buildings and auditoriums, developed hundreds of gardens and installed thousands of statues, assuming that we had paid back the debt of gratitude to him. This is an absolutely wrong idea. We haven’t repaid the debt at all!

Whenever I visit any auditorium named after Babasaheb and see his grand statue there, why do I feel suffocated? Why do people still die unattended in the hospitals built in the name of Babasaheb? Why do I feel disappointed whenever I visit any institute of higher learning named after Babasaheb? Why does the voice of Babasaheb’s followers become feeble in Parliament? Why is travelling in a plane from the airport named after Babasaheb still a dream for many? How many more examples do I need to give you? These eyes have seen a lot of ups and downs over the years, so the mind gets perplexed at times. After all, when will the common man be free from this pomp, show and deceit? Babasaheb! When will India become a country of your dreams? 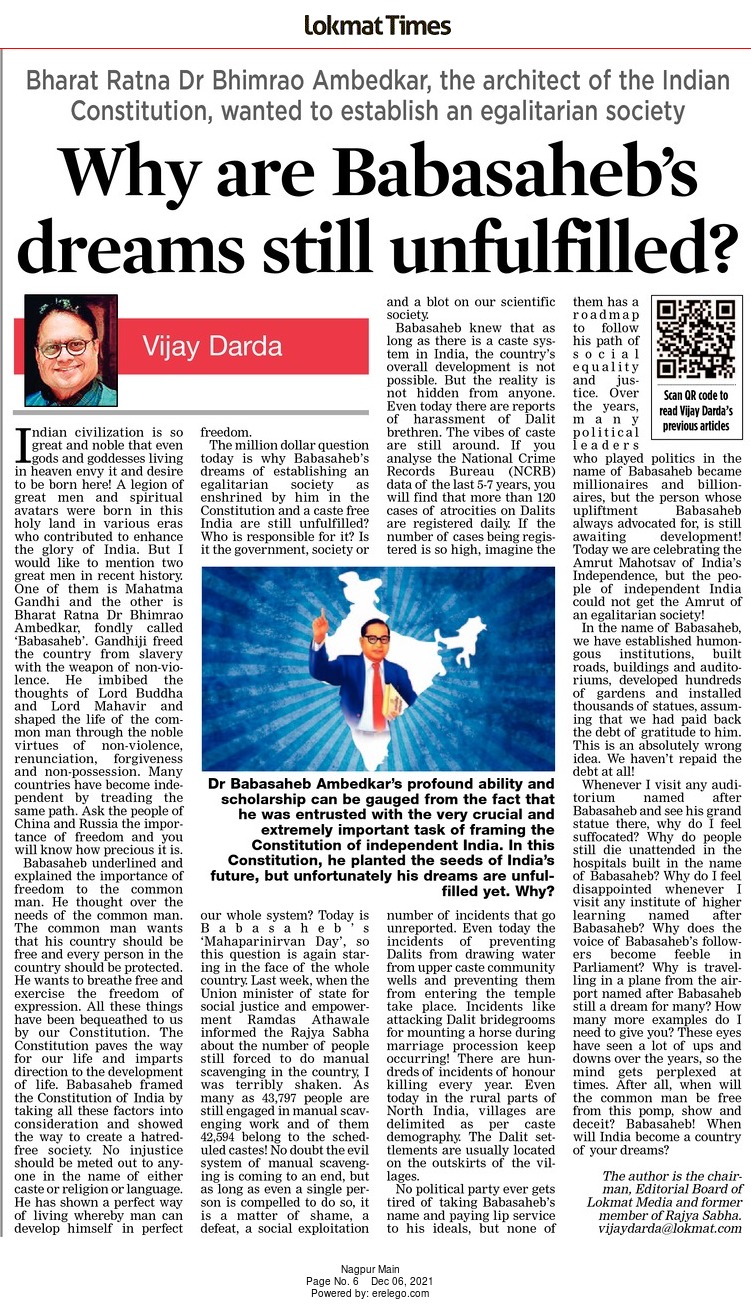