AND WHY I HOLD BACK THE THIRD ONE

A man from a village in Maharashtra, Ralegaon Siddhi has captured the imagination of the entire nation, like no one has done in recent times. Indeed, right now his name Anna reverberates even across the borders. Even in countries like Pakistan and China that have remained otherwise hostile to us, he is seen as the symbol of people’s power. He has surely touched a chord, and struck a raw nerve with the people. In him, they see hope.

Hope at a time when life is becoming increasingly difficult for everyone under the crushing burden of rising prices, and the task of making both ends meet gets demanding by the day. The government, supposed to be the saviour at such moments, has badly let down the people, and has nothing more than promises for a better future and alibis for the past failures to offer when there is a crying need for relief. In such circumstances, the claims that the economy is growing at an impressive rate of 8 percent even in the face of a global downturn, though laudable from one standpoint, offer cold comfort to the people.

The crisis is accentuated by a combination of poor governance and inefficient delivery mechanisms in the service sector. Our babudom has never built a reputation for clean, efficient and quality service. On the contrary, the entire machinery is rickety and creaks with corruption. The very word ‘inspector’ when associated with every form health, school, police, RTO, sanitation, revenue, ticket or anything has assumed a bad connotation to it and there is a history of coercion and corruption Two associated with it. Add to this, the always critical gap between demand and supply in every field. The average citizen simply groans under the burden of corruption. True, all of us feel cheated when there are mega scams and media reports of thou-sands of crores being looted from the exchequer. It does bother us all, but then its impact is impersonal. It is the day-to-day transactional corruption that is not only burdensome in monetary terms, but also makes us feel helpless as citizens that bothers me. In this context, my personal experience of observing the plight of a Kargil War hero battling with the staff at the New Delhi railway station for a berth back home, and ultimately taking the help of a tout is a constant reminder of the deep-rooted systemic malaise. To my mind, the people are fed up with this, and it is this deep angst that is being reflected in the popular support for Anna Hazare’s movement.

It is in this context that the relative prosperity that has been ushered by the 8 percent GDP growth that further adds to the problem. The growth has not just created billionaires who have the best of everything in the world, but it has also widened the already existing inequalities in the society. When they see that there are neighbours who can afford everything, and they have to pay their way even for their basic needs through an oppressive system of corruption, the people simply lose patience. We have come at this critical juncture in the evolution of our nation as a modern developing society. The people now want to see a credible roadmap that shall deliver them from this era of shortages in terms of education, health and other basic services at affordable prices without the red tape of corruption.

In the immediate context of the Hazare movement, it would be instructive to recall that it caught the people’s imagination soon after the cricket team’s heady victory in the World Cup finals. That was a high point in the collective psyche of the nation, as cricket unites us all, like nothing else does. Now, everyone can be wiser with hindsight and find all kinds of faults with the government handling of the protest yoga guru Ramdev. Similarly, there can be endless debates about the content and the form of the Lokpal Bill and the merits and demerits of the various drafts that have been put forth in the public domain. The short point in all these debates is that no one in the government or anyone in the country wants corruption to thrive. But the equally valid argument is that there is no one single pill that shall eradicate corruption.

At its very basic, corruption is a moral question and then it is burdened by the element of human greed. The tendency to make easy money is universal, and people are known to have a penchant for exploiting their positions for material gains. Yet, the need for a tough deterrent anti-corruption law remains paramount.

Hazare’s movement has achieved two things. Firstly, it has drawn attention to the issue of corruption, and secondly it has galvanized people’s awareness. For these successes, I give them my two cheers. But I cannot say three cheers for them, as an elected representative and someone committed to the parliamentary form of democracy. Nor am I comfortable when they use expressions such as ‘second freedom struggle’ or yet ‘another JP revolution’. Similarly, I do not know how apolitical this movement is when I see that it is supported by the RSS, ABVP and the like under the euphemism that these organisations are all for backing anyone who is fighting corruption. We all know from history that these organisations have the skill and the expertise to subvert such movements from within, and people like Anna Hazare wittingly or unwittingly are exploited by them for their partisan political ends. As it is, for the last eight years, the BJP has been struggling to make a comeback on the national scene, with no viable action plan or leader to steer them the course. The Hazare movement thus offers them a godsent opportunity to get back at the Congress.

To my mind, Hazare’s satyagraha ill fits a comparison with the great Mahatma’s battles against the British empire. True the weapon is the same, but the wielder is different. It is always said that in a war, it is not the gun, but the man behind the gun that matters. So, though launched with a Gandhian methodology, the movement lacks the maturity and moral strength that worked for the Father of the Nation. It forgets that the parliament is supreme and reflects the collective sovereign will of the people. So, by insulting all parliamentarians, describing even the voters as’saleable and corrupt’ and striking a posture as if’all except those who are with him’ are amoral and corrupt is totally un-Gandhian to say the least.

For someone who promises to usher in a new era, Hazare needs to come up with better statesmanship rather than the one-liner “accept my Bill or I fast-unto-death”. He claims to improve the moral fibre of the country, so it is all the more incumbent upon him to refine his approach, and lend it a deeper substance. Positing that laws should be made as per the demands voiced from maidans or all those who oppose this idea are traitors, hardly does any service to democracy. 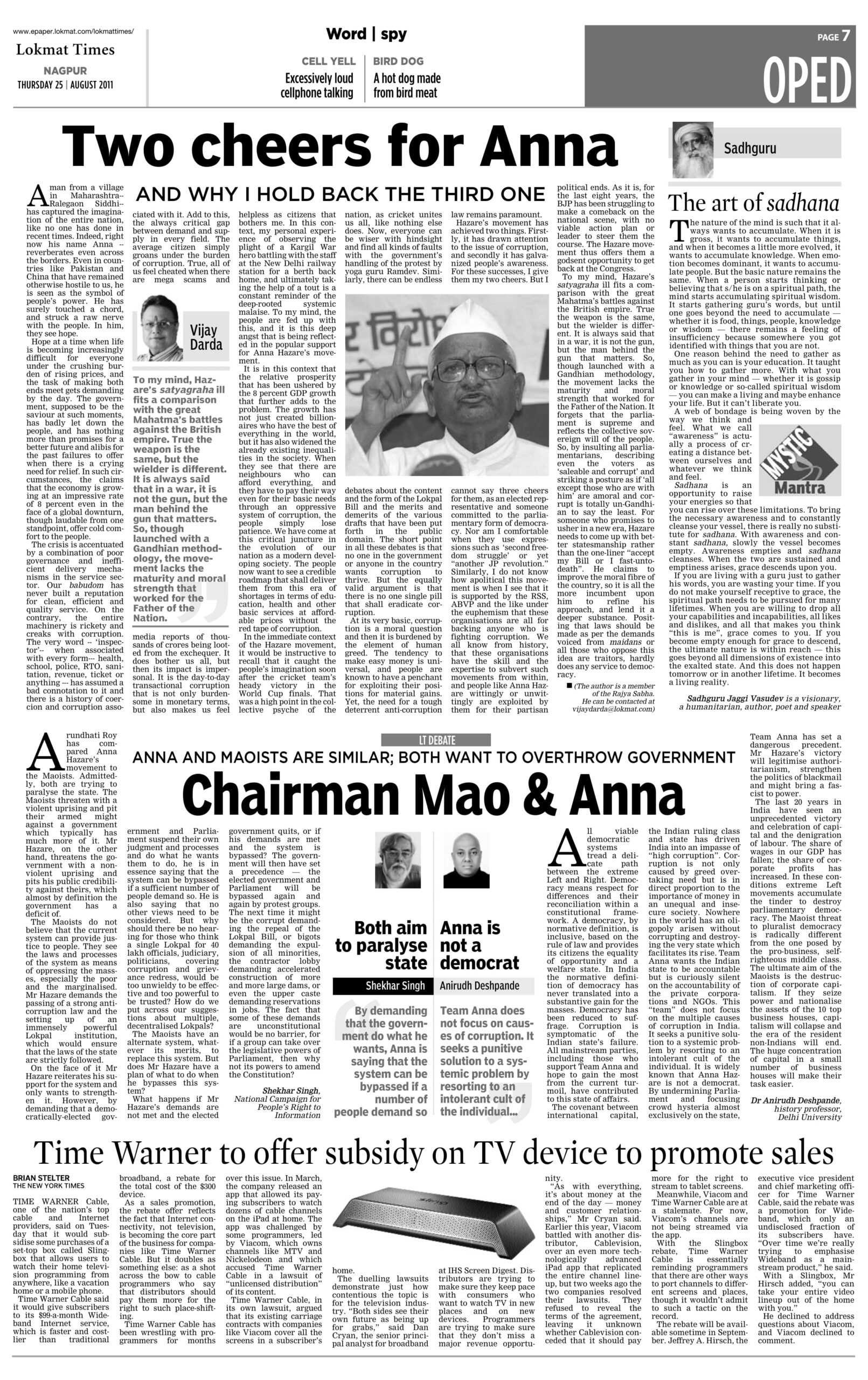