Landmark events are seldom neatly compartmentalized into calendar years. The now departing 2013 calendar year also fits into this description. We entered the year under the shadow of that grim gang-rape of the 23 year old Delhi brave heart whose name has been sadly buried under our complex attitudinal fault lines, whereas the whole world knows who this Nirbhaya is. The tragedy galvanised public opinion, and yielded unprecedented reactions from the establishment including a new set of laws, and Rs 1000 crore fund that remains untouched. But who can claim after a year with any confidence that women get a better deal now? In the glare of public scrutiny, at least there are two distraught young women – a journalist and a law intern suffering humiliation at the hands of an editor and retired Supreme Court judge respectively, and the new set of laws gives them little succour. If we were to talk about the happenings in the privacy of the closed doors, then the less said about the plight of women, the better. The documented reality is that women prefer to suffer in silence, rather than bring their plight in the open. The maltreatment of women is not just a legal issue or a crime under the Criminal Procedure Code. It is an attitudinal crisis in our society, and we have been failing to grapple with it. In terms of resolving this crisis, 2013 was a less than a memorable year. This failure not only pushes half of our population behind, but also gives us a bad name globally. It dents our ambitious efforts of becoming a political and economic force in the international arena. It shows that we are some archaic patriarchal society that cannot treat its women with respect and dignity.

The year gone by has highlighted this collective inability through the occurrence of various incidents of rape. But this is not the only deficiency that has emerged as our country grows in political maturity and economic strength. We have always been very proud of our democratic system, and we have congratulated ourselves on the repeated rustic wisdom of our electorate in choosing the right governments. But the electorate told us in Delhi in no uncertain terms, that the political party system has failed to come up to the aspirations of the people. The unambiguous message from the voter who had opted for the Aam Aadmi Party is her rejection of the Congress and the BJP – the two major political parties in the country. To read any lesser meaning into this message would be disastrous. More so, in the light of the fact that six months down the road, we are looking at a general election, and can ill afford any instability arising out of a fractured mandate. The BJP can draw a lot of comfort from its performance in the three states-Madhya Pradesh, Chhattisgarh and Rajasthan, but it should not forget that the AAP option was not available in these states. In fact through the support for the various protests and through various outlets, the people have been conveying the message that they are fed with up with political as usual. As their aspirations grow, and when they increasingly find it difficult to meet the challenges of life, the people are bound to blame the politicians for this situation. There is no getting away from this reality, and in this respect 2013 has given an un-coded message- perform or perish.

The same holds true for the economy. The experts can give us as many reasons as they have for the slowdown. They may argue that even 5 percent is not a bad growth rate for the GDP of an economy of India’s size, but then they make this argument they forget that they not dealing with cold statistics. This is an issue that impacts the lives of millions of people whose ambitions and dreams cannot be put on hold till the global economy recovers. These are the millions who believe that through the ballot they have put in place a government and a political system that shall take care of their lives and cushion them from these shocks. Just as the people expect the government to protect them physical dangers, they also hope and trust that the government will protect them on the economic front and not leave them to the mercy of the international forces. The economic problems of the Indian people want solutions that are basically rooted in the Indian economy. The price of petrol that an urban college student pays for his two-wheeler bike cannot be linked with the daily fluctuations in the international crude oil market. The linkage between the two may be a good economic argument for Kirit Parekh the economist, but then it plays havoc with the life of this college student.

This havoc gets translated into youthful angst with socio-political consequences. The housewife’s fate is no different when she is confronted with the hardship of rising prices of essential commodities, and has similar consequences. In both political as well as economic terms, 2013 did not yield imaginative solutions that could feed the growing needs of an aspirational India. In essence, this has been a prolonged crisis of confidence. Whether it is the politics of the country or its economy those entrusted with the responsibility of steering the course of events have not been able to generate and sustain the right amount of confidence among the respective stakeholders. It is this sum total that makes 2013 a less than memorable year. When you live through such a year, the natural human optimism fuels the hope that the coming year should be better. If not for any other reason, then at least from a stand point that things cannot keep following the same trajectory endlessly and have to improve after they have been bad. A nation depends on its collective genius to move ahead. The politicians sell themselves and make a pitch with their package of dreams. As 2014 dawns, the people will get ready to come up with their valuation of these dream merchants. We can only hope that the collective genius of the Indian people will not let them down. Or else, we know time is an unforgiving teacher. 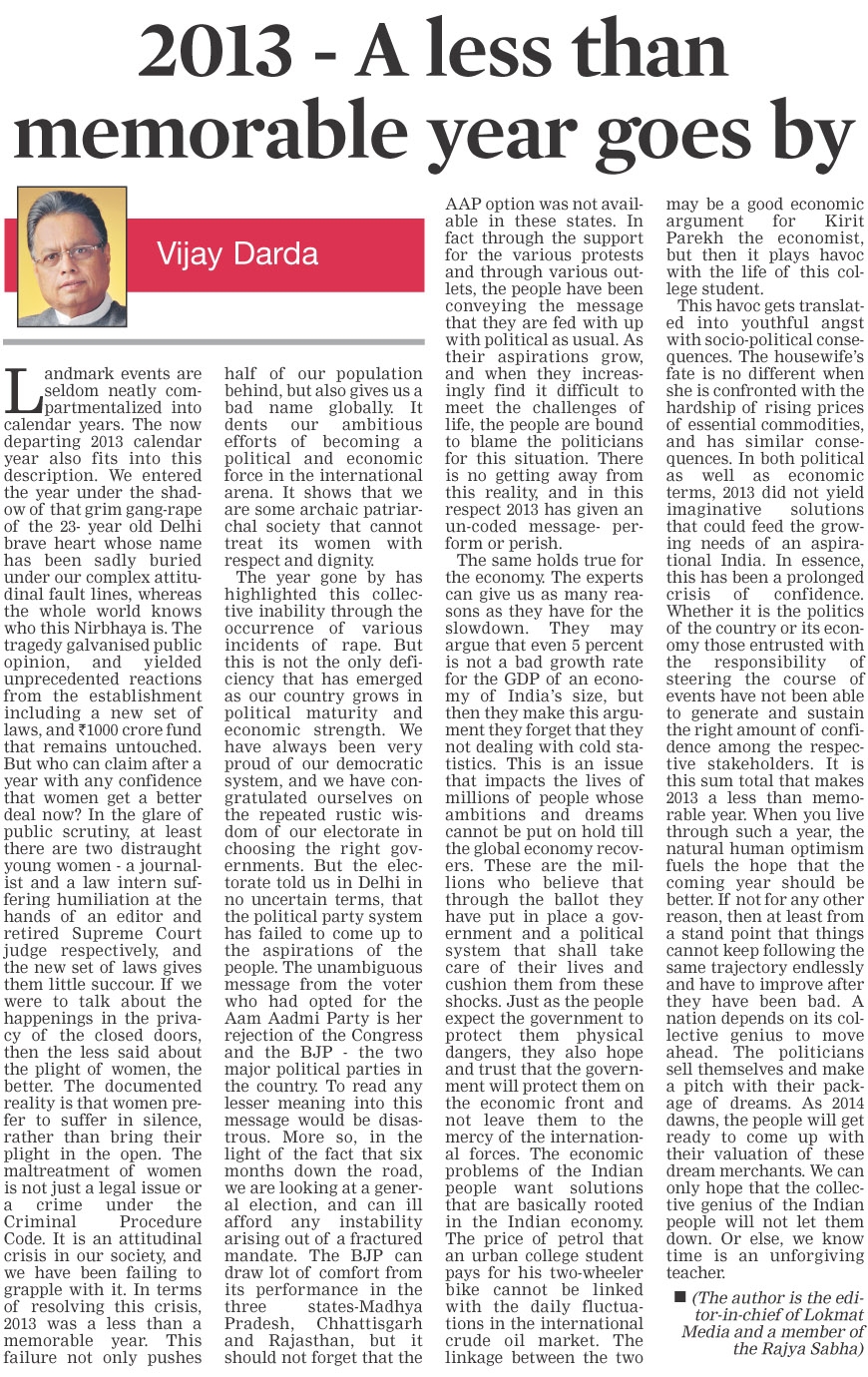