Notwithstanding the government’s claim, the reality is that securing administrative justice is becoming tough

The country is clearly realising that the system designed for the common man is not functioning properly. People are not getting administrative justice and therefore, they feel obliged to go to the court. The working style of the executive and the legislature is such that the public interest petitions against them are piling up and the judiciary has repeatedly taken them to task. The court’s reprimand for the executive has become a normal thing. The legislature has appointed so many tribunals that it is difficult to keep their count which clearly shows that the system is not doing its job properly.

I have raised these issues in Parliament many times and raised the question as to why government and administrative accountability is not fixed? It is surprising why even small cases reach the higher judiciary? Earlier, there used to be a debate and discussion on constitutional matters. Now the matters ranging from administrative delays, election glitches, movies and sports reach the Supreme Court. Just see the case of the Board of Control for Cricket in India. This Board is the richest and has been occupied by the political bigwigs since its inception. Ultimately, the Supreme Court itself had to take initiative to clean it. The case of defence deal and corruption cases against industrialists also go to the higher courts, while it should be dealt at government and administrative level and penalty should also be imposed. Today, every matter right from that related to farmers, corruption, right to food or right to education, everything goes to court for seeking justice. The whole system is against the common man.

If any building is dilapidated or illegal, one is forced to go to court to get it demolished. Why is court needed for this? If publication of any controversial book is to be prevented, people go to court or if there is any matter related to cricket or any other matter, again the people go to court! Even the courts have to intervene to order investigations in criminal cases. The court while hearing the issue related to the Pansare murder case this month, made a sharp comment. The remark of the court clearly questions as to when the officers, administrators, top police officials and office-bearers will realise their responsibilities? In one such case, the court asked: are we corporators of municipal corporation or a civic commissioner? Even after such harsh remarks, there appears to be no improvement in sight.

The problem with the courts is that the number of judges is not adequate and the resources are not sufficient so as to ensure speedy disposal of cases. Today, there are about 2.90 crore cases pending in India. Of them, more than 71 per cent are criminal cases. The cases filed in the form of petitions add to the pile in the court. I must say that justice has become very expensive. Free justice is on paper only. The government should ensure that people get justice. The need for court intervention should not arise because excessive amount of anything is not good.

So the question that arises is how the country can come out of this serious situation? It seems that the legislature will have to take the initiative. Essential laws must be enforced strictly. The executive must be made accountable to become part of the just system. I would like to remind that in 1966, the high-power Administrative Reforms Commission was set up. Its chairman was Morarji Desai. Its members included greats like the then MPs K Hanumanthaiah, Harishchandra Mathur, G S Pathak and H B Kamath.

That committee had suggested 12-point administrative reforms. Had those suggestions been fully implemented, our bureaucracy may not have become so unreliable and irresponsible. It must be remembered that when the executive becomes irresponsible and politicians become corrupt, the bureaucracy superimposes itself. Therefore, in today’s times, it is essential for the government to take honest steps and ensure that our bureaucrats fulfilled their obligations and became committed to their duty. If we do so, we will also save the judiciary from the extra burden.

Is the executive wing in India so weak that people are turning to the judiciary for everything and the court has to intervene in these cases? This is a grave situation. This issue calls for an indepth discussion from every perspective. 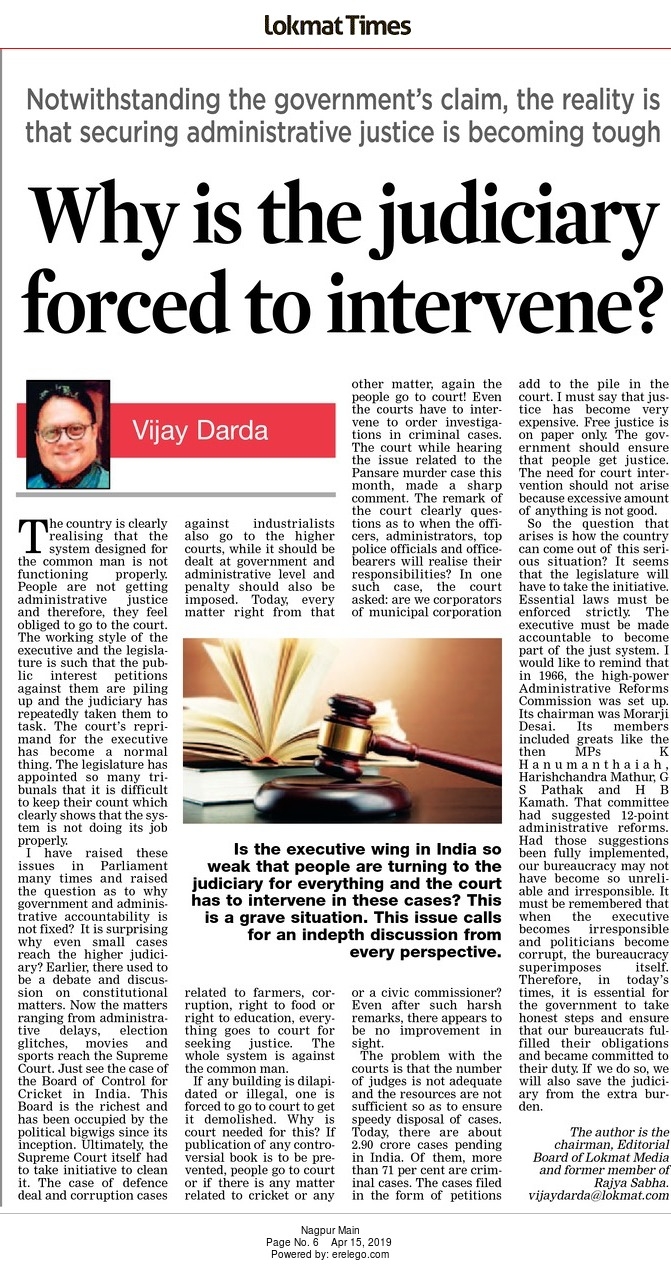