Not a mere ceasefire violation

The internal political heat generated by the brutal attack by Pakistanis who violated the Line of Control (LoC) and ambushed our jawans to kill five of these bravehearts has subsided. Union defence minister A K Antony has rightly laid the blame at the doorsteps of the Pakistani Army. In the context of the almost six-decade-long border conflict with Pakistan, it does not make much sense to make distinctions of the kind that he had sought to do when he first described the attackers as “terrorists dressed in uniforms of the Pakistan Army” and Pakistani soldiers. The plain fact is that the Pakistan Army remains the mastermind of all violent attacks on us. For us this is the only fact that matters, and insofar as what kind of personnel it chooses to launch a particular operation, it is a matter of mere operational detail.

The angst in the country was over the prima facie refusal of the defence minister to acknowledge this plain fact in no uncertain terms. There was a feeling that whenever it comes to issues that require an unambiguous assertion of national pride, as well as an unqualified statement that the government would go the entire distance to make the other side pay a price, the authorities somehow dither. It happened in the recent past when the Chinese intruded as well as in the case when a soldier was beheaded.

These are matters which have to be dealt with upfront. The authorities may explain that such things should be handled softly and with a behind the scenes approach, but the people’s psyche remains hurt. In this instance also, there has been some talk that the Pakistani ambush was a reaction to the killing of five civilians from their side. But for the people of our country, this is not a matter of numerical parity. It is plainly an attack on the nation’s sovereignty.

It is a matter of record that after the humiliation it suffered in the 1971 war, the Pakistan Army has been waging a low intensity war that hopes to bleed India by thousand cuts, and the Poonch operation was the latest of the cuts. I am sure that the planners in Pakistan must have been overjoyed to observe the kind of political divide this latest incident provoked within our Parliament. In their heart of hearts, the Pakistanis not only enjoy but also play upon this political divide in our country.

As the defence minister told the Parliament, there have been 57 instances of ceasefire violations this year. We can be sure that the relative peace that has prevailed in Jammu and Kashmir for some time has not been to the liking of the Pakistani defence establishment. As the Americans start vacating Afghanistan, Pakistan’s pre-occupation with India is going to rise. More so, as the Indian Army gets a larger non-combat role in rebuilding that war-ravaged country.

In fact, the real challenge for us is not just the control of these ceasefire violations. The tougher task is to create an environment in our relationship with Pakistan wherein all the sections in our neighbourhood — the politicians, the civil servants, the civil society and above all the army and ISI — start realising the futility of maintaining a hostile relationship with us. By all accounts this is going to be a long drawn process, but then let us face it that there is no alternative to this route.

As we keep up our march towards becoming an economic superpower (the current slowdown notwithstanding our fundamentals are strong, and we can deliver it for ourselves) and take the necessary corrective steps, we cannot lose sight of this broader objective. It should not be assumed that this is just a matter of diplomacy or foreign policy.

For us as well this is a task that extends to our security apparatus and the establishment. All our super power ambitions would be thwarted by a feisty and hostile neighbourhood. Even a fringe element in Pakistan can damage the fragile peace that exists along the border, and even within our country. But right now all the fringe elements seem to be getting the support of the Pakistani establishment, even if it is statistically correct that they too have incidents of terror in their country.

But there is a major difference between the way terrorism is used by Pakistan, and the way it affects us. They have been using terrorism as an element of their foreign policy. For the violence inflicted on India is means to bring it down to the negotiating table. In our case, we want to negotiate with Pakistan only to eliminate this policy of using terror.

As the bigger of the two neighbours, our economy is supposed to be eight times their size, and in every respect we are far ahead of them, it is our responsibility to convince them of the fruits of a peaceful relationship. Similarly, it is our job in the alternative to make them fully aware that our hostility is not worth the price they have to pay. We should accept that as a country we have failed to do this job, through either of the two routes. We have not been able to convince either about the tempting utility of our friendship, as well as the prohibitive cost of our hostility.

With prime minister Nawaz Sharif at the helm of affairs in Pakistan, and a much more experienced person than he was in his earlier stint, we have this opportunity to bring the required element of rational thinking in the relationship. It is the time for the seasoned and sensitive brains on both the sides to chart out the road-map that takes into account these hiccups, and insulates the relationship from such attacks. It is not such a difficult problem, if we keep talking. One modality suggested by a senior diplomat is that there should be a fixed schedule for meetings to solve all the problems. This meeting should be held, say every Wednesday, with the agenda for the next meeting to be decided before the end of the meeting. We have to accept the physical reality that we are neighbours, and have no option but to live in peace. There is no second option for us, as history and geography have both denied it to us. 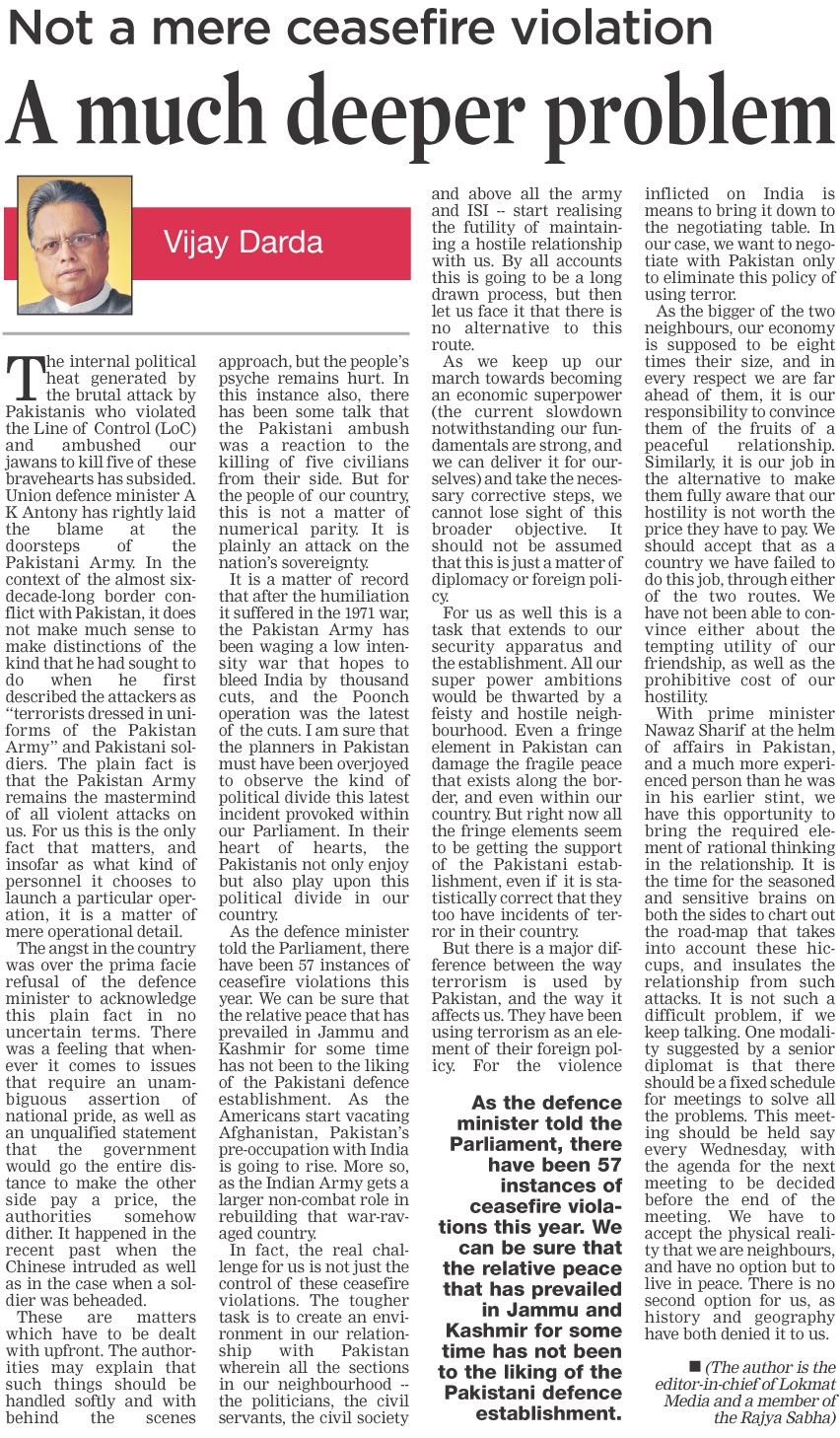