China is resorting to its old tricks to destabilise India, arming extremists with lethal weapons

The jawans of Assam Rifles in Manipur have been ambushed and three of them martyred in the same Chandel district in which the militants had launched a deadly attack on an Indian Army convoy in June 2015, killing 18 of our soldiers. It is clear from the latest attack that the militants have started raising their ugly head and are reasserting their defiance to such an extent that they can now dare to attack the Indian security forces.

The threat of further attacks by militants in the North-Eastern states and the unrest there had started to loom large the moment Chinese incursions started in the Ladakh region. China is the biggest supporter of militants in the North-Eastern states and the sole purpose of creating unrest there is to not let India shift the Army stationed there anywhere else! This move of China was further confirmed in the last week of June 2020 when a huge cache of arms was caught at the Thailand-Myanmar border. All the weapons were made in China. Prima facie, it seemed that the weapons were meant for the Myanmar terrorist outfit called Arakan Army, which China keeps aiding and abetting but the experts later confirmed that the Arakan Army does not use such weapons. Through the Arakan Army, this cache of arms was being sent to the militants of the North-Eastern states in India. Militant groups in Myanmar and India work in tandem. However, India has also sought information from the Thailand government regarding the stockpile of arms and requested it to provide a detailed investigation report. Our intelligence agencies are at work too.

Though this stockpile has been seized, would China not have already delivered such arms cache before, is the moot question. There is nothing to suspect otherwise. In fact, one route to deliver a consignment of Chinese weapons in North-East India is from Myanmar, where many militant groups have links with terrorist groups in Manipur, Nagaland, Arunachal and Tripura. The other route is from Bangladesh. The Netherlands-based think tank European Foundation for South Asian Studies (EFSAS) has categorically stated in its report that China is continuously engaged in fomenting tension in India. It is arming the rebels of Myanmar to stand against India. Many militant outfits in the North-East have taken refuge in Myanmar. They cross the border, carry out attacks here and go back to Myanmar with impunity. India shares good relations with the government there, but the problem is that the terrain is inaccessible and the militants hide in the forests and mountains. Many a time, the armies of India and Myanmar carry out joint operations but the network of militants is very strong, and China too may be informing them about all the activities. So they escape.

So naturally, the question is what kind of strategy which could prove effective against extremism in the North-Eastern states should be adopted. The administrative machinery has been strengthened and development brought about in the region, thanks to the efforts made by the previous Congress government and now the BJP regime. The common man too wants that peace should be restored, but the militants are so dominant that people remain silent. Here, the common man is sandwiched between the militants and the security forces. Many a time, the locals suffer too during the counter-measures by security forces against the extremists. This has bred resentment among the people on many occasions. Therefore, special attention is needed. But the major problem before the government is whom it should talk to in order to establish peace. There are many militant outfits and each one of them has its own agenda. Most of the rebel leaders dance to China’s tune.

Under the circumstances, it is imperative to adopt an aggressive stand against extremism while taking care of the human rights. In 2015, when the Indian Army had entered the dense forests and destroyed the militants’ hideouts to avenge the martyrdom of their fellow soldiers, it had created a sense of fear in their minds. Almost all the militant organisations had gone silent. Though there have been a few isolated incidents, the militants could not carry out any major attack after that. The need of the hour is to put in place a firm, strict and aggressive strategy for the elimination of these militants. They should be cornered and cordoned off in such a way that no external element, including China, could deliver weapons to them under any circumstances. If we are successful in doing this, the screws on extremists could definitely be tightened to a great extent. But we will have to eliminate all those leaders and elements, too, who sneak into our system, nurture extremism and help it to spread on our soil.

China wants to breed unrest in India by making the North-Eastern states more turbulent amid aggression in Ladakh. It is sending cache of arms and ammunition to the militants. We have to take a firm and aggressive stand against these extremists so that China does not succeed in its dirty game. 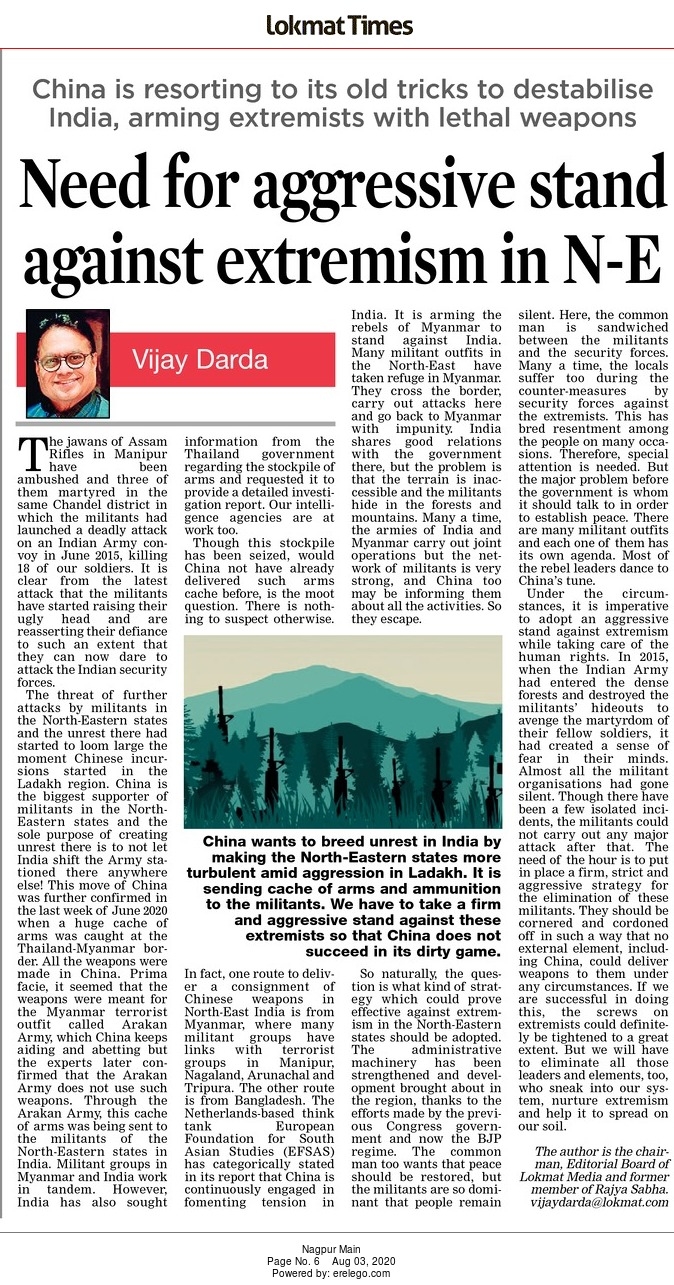 A strategic victory against terrorists

Apathy towards North-East can prove dangerous!