A new era of opportunities and challenges

It is not just a coincidence that Narendra Modi begins his tenure as a Prime Minister on the eve of 50th death anniversary of Pandit Jawaharlal Nehru — India’s first Prime Minister. The results were declared on May 16, and he had got a clear majority. So, there was no need to wait for such a long period of about 10 days. But then Modi is a man of symbolism, and just as his decision to invite the heads of governments of all the SAARC nations is loaded with diplomatic overtones, the choice of his date of swearing-in tells us a lot about his intent. He has won the election by posing himself as an anti-Nehruvian politician who believes that India would have been a different country if Sardar Vallabhbhai Patel had been the first Prime Minister after independence in 1947. So, the symbolism of taking over on May 26 is loud and clear.

Modi has also set the tone of governance by having a ministry that is about 60 percent of the size of the previous UPA government. His gambit of merging and integrating several ministries does have the virtue of downsizing the government, but then it would be tested on the yardstick of deliverables and performance.

This in any case is a great opportunity for Modi as the Prime Minister. He has come in at a time when the governance levels had hit a new low and projects worth several lakh crores (Rs 6 lakh crores is the official estimate) had been stuck in government files. The term policy paralysis — a byword for officials refusing to take decisions under the fear that they would have to pay a post-facto price — was the only befitting of the previous government. So, a mere withdrawal of that government could have the impact of kick-starting the investment process, and given Modi’s reputation for a no-nonsense approach this should do the trick.

Besides, he has never been short of innovative ideas, and this is the right time to go full steam and translate his 56-inch chest boast into action. The nation’s mood is also supportive and in a democracy this has its added virtue. As a chief minister who has developed his own growth model, he could be easily expected to utilise this national opportunity to create the right environment for the other states to develop on the basis of their strengths and leverage their advantages into tangible gains on the growth front. He surely knows that in a country as diverse and plural as ours the ‘one size fits all’ approach does not work.

The campaign was undoubtedly shrill and divisive, and it would be unrealistic to expect it otherwise. But then, as they say, in victory magnanimity and in defeat grace — are the two hallmarks of a democracy. So, one would expect that Modi the winner would be generous and in defeat Rahul Gandhi the loser would be graceful. Only then national interest and that of stable democracy would be served adequately. It is worth mentioning that for all the targeting of the Nehru-Gandhi family for perpetuating dynastic rule, the critics would have to bear one thing in mind.

Each and every member of this dynasty has earned the democratic approval of the nation for its leadership, vision and sacrifice. No one can ever claim that Panditji got the leadership of the country because of dynasty. He earned it first through his monumental contribution to the freedom struggle, and then successfully lead the Congress party for three consecutive General Elections. Let us not forget that his successor was not his daughter Indira, but a humble Lal Bahadur Shastri. Who knows how long Indiraji would have been required to wait or whether she would have made it all had not Shastriji passed away so unfortunately in 1966? Then she did not get the post without an internal struggle against the old guard. This does not happen in dynastic politics, where you get the throne merely by virtue of heritage. She was also severely tested in elections in 1967, 1972, and 1977 and 1980. To describe all her victories to dynasty is to make a mockery of democracy. Yes, Rajivji did get the post on his mother’s death in 1984, but that too was followed by democratic approval. He did lose in 1989, and one can be sure that in 1991 the Congress victory was largely due to his leadership although he could not lead the country. Then let us also not forget that from 1991 to 1998 Soniaji was also out of power and she won the people’s approval in 2004 after a stint as the leader of the Opposition. Her critics should remember that she humbled a sitting prime minister Atal Behari Vajpayee, and then strongly led to another win five years later. Before running down the role of dynasty in keeping the Congress together, the critics would do well to reflect on these aspects.

It is this lineage that makes the 2014 verdict an opportunity for Rahul Gandhi. Like all the other leaders from his family, he now has the opportunity to prove himself as a leader against all odds. But he faces a more challenging and onerous task as compared to all his predecessors in the family. This is because the scale of the defeat is unprecedented and the nature of opposition too has changed. The rules of politics too have changed in an aspirational India, but then he has already shown the ability to grapple with these essentials. Whatever be his other failings, he has shown that his basics are right. He can build on the solid experience and expertise of his mother, and can also bank on the more than adequate support of his sister Priyanka. There is everything to gain if this trio works as a team, and delivers the Congress package that secular, plural and modern India needs badly in the 21st century. 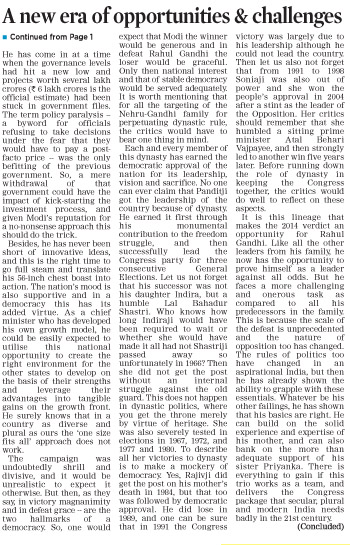 Cacti of challenges in our garden of freedom

Nourishing his idea of India is vital for democracy