At the age of 44, Maharashtra chief minister Devendra Fadnavis has an unparalleled opportunity to make a lasting contribution to the development of the State. Never before in the recent past, has a young person come to such a high office in the State with such a tremendous bank of goodwill, and such a varied experience in public service. That he should succeed is almost a universal desire. More than that, although the ruling BJP does have an alliance with the Shiv Sena the logic of numbers is such that it is almost akin to a single party rule. To top it all, he is the hand-picked choice of Prime Minister Narendra Modi and thus automatically gets all the Central support that is required to push the process of development in the State. In short, things could not have been better for him.

But it must be pointed out right at the outset that the challenges too are huge. There aren’t easy options available, but then therein lies the opportunity. To begin with, we all know that he is a committed Vidarbhaite. However, it is equally well recognised that now he is the chief minister of the entire State of Maharashtra, and not just the region of Vidarbha alone. At the same time, for the people of Vidarbha to expect that he uses his positive discretion in their favour is not just a legitimate expectation, but also their justified right. Not just Vidarbha, but all the hitherto backward and neglected regions of the State have a well-founded hope that during his regime they would be getting a fair and just treatment.

We can count a number of issues that deserve the chief minister’s attention and prompt action, and can be sure that given his sincerity of purpose he would be attending to these with some alacrity. However, there is one overarching aspect that cannot be over-stressed under any circumstances. This being the acceleration of the pace of industrialisation in Vidarbha. This is the only time-tested route for sustained progress. Fortunately, there are a number of options that can be tapped with a sense of priority. To list just a few we can facilitate an auto hub and an auto testing hub in this region and also harness the opportunity that is being offered with the opening of the defence production sector for the participation of the private players. The fact that the Vidarbha region has a clutch of ordnance factories — Bhandara, Pulgaon, Chandrapur, Ambajhari — points towards the suitability of the area as an investment destination in this sector. Besides, with major investors like Baba Kalyani and Larsen and Toubro having technological abilities in this sector only goes to show that this sector which offers tremendous growth opportunities can be harnessed to meet the aspirations of the educated youth who are looking for jobs.

But the industrialisation of Vidarbha has to be an active process of wooing the investors with a sense of aggression that has not been seen in the past. This implies that concessions with regard to land, water, power and taxation are offered at such a scale that it makes it difficult for the investors to resist the option of investing in the region. It is here that the chief minister can creatively deploy his modern education and ability to solve problems with a management approach. For instance, the rates of power in Maharashtra for the industrial users are at a high of ` 9 per unit, whereas other neighbouring states like Madhya Pradesh and Chhattisgarh provide the same input at sub ` 5 per unit rates. This gap would have to be bridged in a way so that the power is available at competitive rates and in abundance as well. Given the availability of natural resources like coal in the region, there is no reason as to why such innovative solutions cannot be put in place.

It is not just industrialisation that calls for innovative solutions. But then the black cotton soil, and the lack of irrigation to realise its full productivity too are areas that have been neglected for too long and present opportunities for the government under the chief minister to match its actions with the words. Whether it is handling the process of industrialisation or resolving the agrarian crisis, the State government cannot be content with a minimalist approach and has to step in as a lead player in the implementation of overall solutions. Half-hearted measures that are presented as semi-baked solutions lead only to unproductive government investments which hardly make any dent in solving the age -old problems. A well-chalked out plan for increasing investments both in industrial and agricultural sectors along with policy initiatives that help smoothen out the roadblocks are the two main expectations from the chief minister, and some concrete measures sooner rather than later would go a long way in providing the right kind of comfort level and atmosphere for growth. For too long, the backward regions of the State including Vidarbha have lived on a diet of unkept promises and false starts.

It would not be out of place to recall that notwithstanding anything else, the demand for separate statehood for Vidarbha has its own independent logic and rationale. It may not remain in active public domain in the sense that there are no public agitations or demonstrations. Nevertheless, its sentimental value and emotional content remain high. The development of the region is always the second best option, and the people are willing to wait for this route to bear fruit. With a staunch Vidarbhaite as the chief minister, the people expect that their long standing grievances would be redressed. In that sense, this is also an opportunity like never before. With Vidarbha’s development could also come the stronger emotional integration of the Maharashtra state, and this is something that the BJP’s alliance partner the Shiv Sena would also endorse.

It is heartening to note that chief minister Devendra Fadnavis also remains consistent about his responsibilities as “Papa” and goes to attend the parent-teacher meeting at his daughter Divija’s school. Just as this is a tribute to the upbringing he had in his parents’ home it also symbolises the importance that he places on the concerns of children and family values. When a power couple like Devendra and Amruta set such standards it augurs wells for the rest of the society. Other parents too cannot possibly duck their responsibilities citing busy schedules as an excuse. 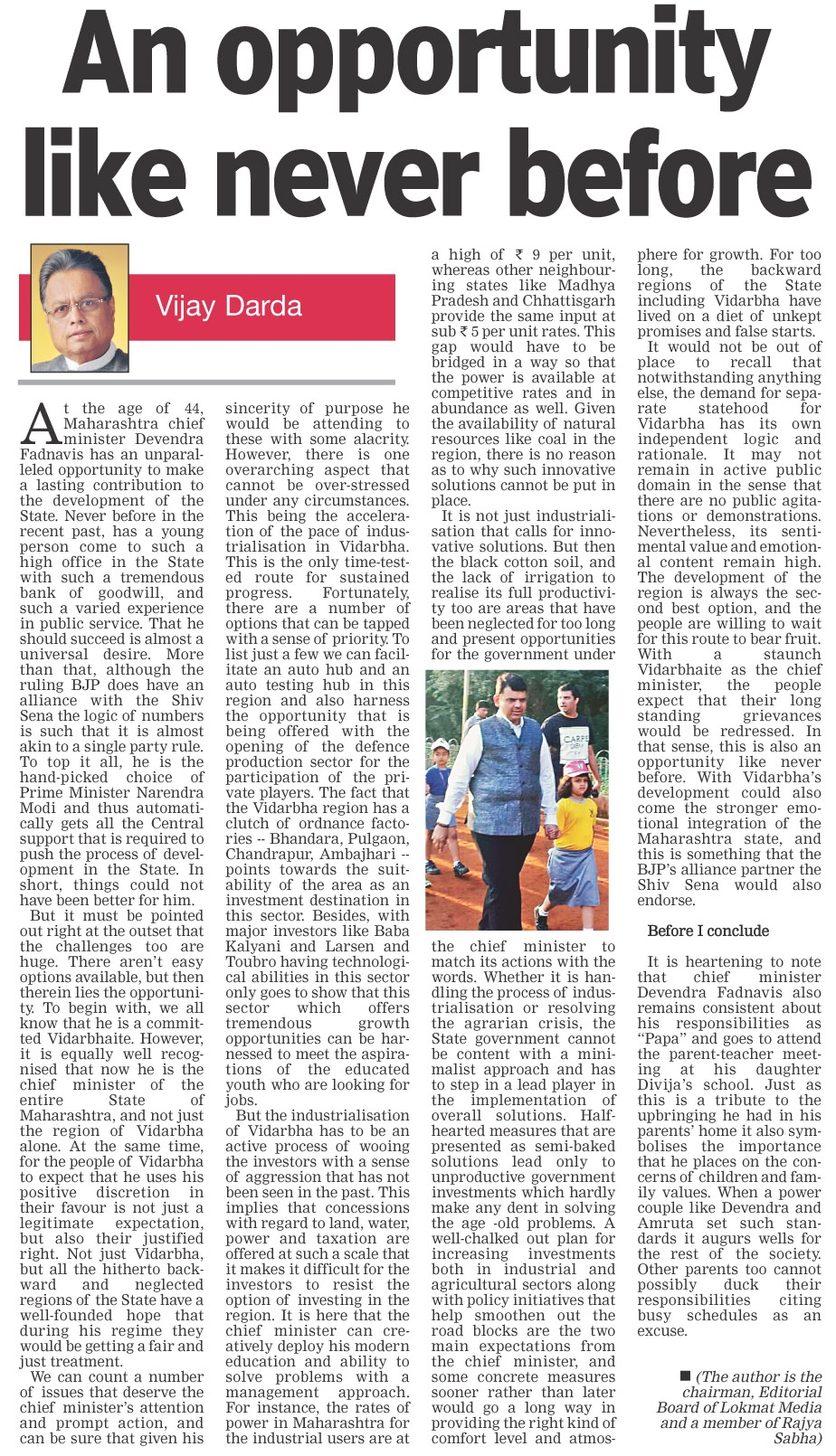