Over the last few years, the Indian political class, especially the parliamentarians have been at the receiving end of the stick. We have been rapped for every possible cause. As a parliamentarian, I reserve my judgment about the quality of criticism. But I have no hesitation in asserting that when the parliament gets its act together, then it serves the nation admirably well. Thus it was a moment to cherish when the Rajya Sabha got together to pass the long pending Lokpal Bill.

Let us get the perspective right. The term Lokpal was coined by the late jurist L M Singhvi in 1963, and the Bill was first introduced in the Lok Sabha by Adv. Shanti Bhushan in 1968. There after there were eight unsuccessful attempts over these forty-five years to get the legislation through. Even in 2011, the Lok Sabha had passed this Lokpal Bill, but it got stuck in the Rajya Sabha. Then it went to the select committee, and the Bill approved at this stage had been pending since May 2012. Finally, last week when the Congress vice-president Rahul Gandhi gave the push and argued that the Bill was 99 percent there and all political parties must support it, the main Opposition BJP agreed to pass it even without discussion. In the event, there was a healthy discussion in the Rajya Sabha, as the Samajwadi Party agreed to walk out, and pave the way for an orderly debate to facilitate the passage of the Bill. After the Rajya Sabha okayed it, the passage through the Lok Sabha was just a matter of form, and this too was achieved in a record time. Such political consensus is one of the key features of our parliamentary democracy.

I would not hesitate to accept that this time the parliament has listened to the voices from outside. The Gandhian social activist Anna Hazare has been a stubborn proponent of the Lokpal. He continued to follow the path even after his protégé Arvind Kejriwal took the political route and achieved electoral success. It is one of those vagaries of public life that the guru-chela team has split, and whereas Anna appreciates the Lokpal, Arvind denounces it. Yet, the same Arvind does not mind forming the Delhi government with the help of the Congress.

From the chain of events, it would be easy to connect the passage of the Lokpal Bill with the defeat of the Congress in the four state assembly elections. But once again this is taking a short-sighted view of the situation. We shall do well to remember that the Lokpal agitation was born out of the movement for the Right to Information. The Congress commitment to usher in transparency in governance led to the RTI, and the Lokpal was the next step. Even before the civil society stepped on the scene, the National Advisory Council chaired by the Congress president Sonia Gandhi was working on it. So, there is enough evidence in the public domain to establish that the Congress concern for transparency in governance and the stress on creating the necessary architecture to fight corruption predates the need for strengthening the party’s electoral prospects. In fact, most of the so-called scams that seem to have given a bad name to the UPA regime are a fall-out of the information that has been obtained through the use of the RTI Act.

The relationship between corruption and the quality of our public life needs to be fully appreciated to get a complete idea of the public angst. As the country grows in terms of the economy, and the people’s aspirations keep rising, they expect a higher standard of public service and goods. Having come out of the dark era of the controlled supply of scooters, phones and cooking gas connections, the people are no longer prepared to put up with poor services in the public domain. Nor are they willing to be short-changed in terms of their rights. But the entire system is still used to enjoying the fruits of illegal gratification, and this creates a clash that cannot be resolved by the usual means. It is in this context that Rahul Gandhi’s assertion about other pending Bills in this league makes sense. The current session of the parliament may have missed the opportunity to enact these, but we can hope that the delay would not be very long. The people’s pressure would keep mounting.

In the current atmosphere that is hyped up to a great extent, it has become customary to doubt even the best of intentions. Everything is looked at from the perspective of elections and votes. In the context of the Lokpal, as well it is being suggested that all the parties agreed to it, only after the AAP got electoral success. Even if we accept this argument for the sake of debate, there is something like the intrinsic worth of a legislation. In the case of the Lokpal, this intrinsic worth has been accepted by parliamentarians across generations and for the first time more than 45 years ago. There was no AAP in 1963 when L M Singhvi coined the term, and nor was it there in 1968 when the Bill was first tabled in the Lok Sabha. Yet, even when politicians have sunk their differences and agreed for an anti-corruption watchdog that has eluded the nation for 45 long years, there should be an ungrudging acceptance that they have done the right thing.

It is no one’s case that there will be no corruption after the Lokpal comes into being. In fact, in the Indian context, corruption has been usually said to be a function of opportunity, and not that of integrity. It is largely a question of mindset. There have been several tough laws on the statute book. Yet, the Lokpal moment is worth cherishing for the unity of purpose that has been demonstrated by a parliament that is divided on the basis of every conceivable aspect. In the case of a nation, it is more important that something unifies it, and this unity itself is the strength. The achievements that flow from this power of union speak for themselves. 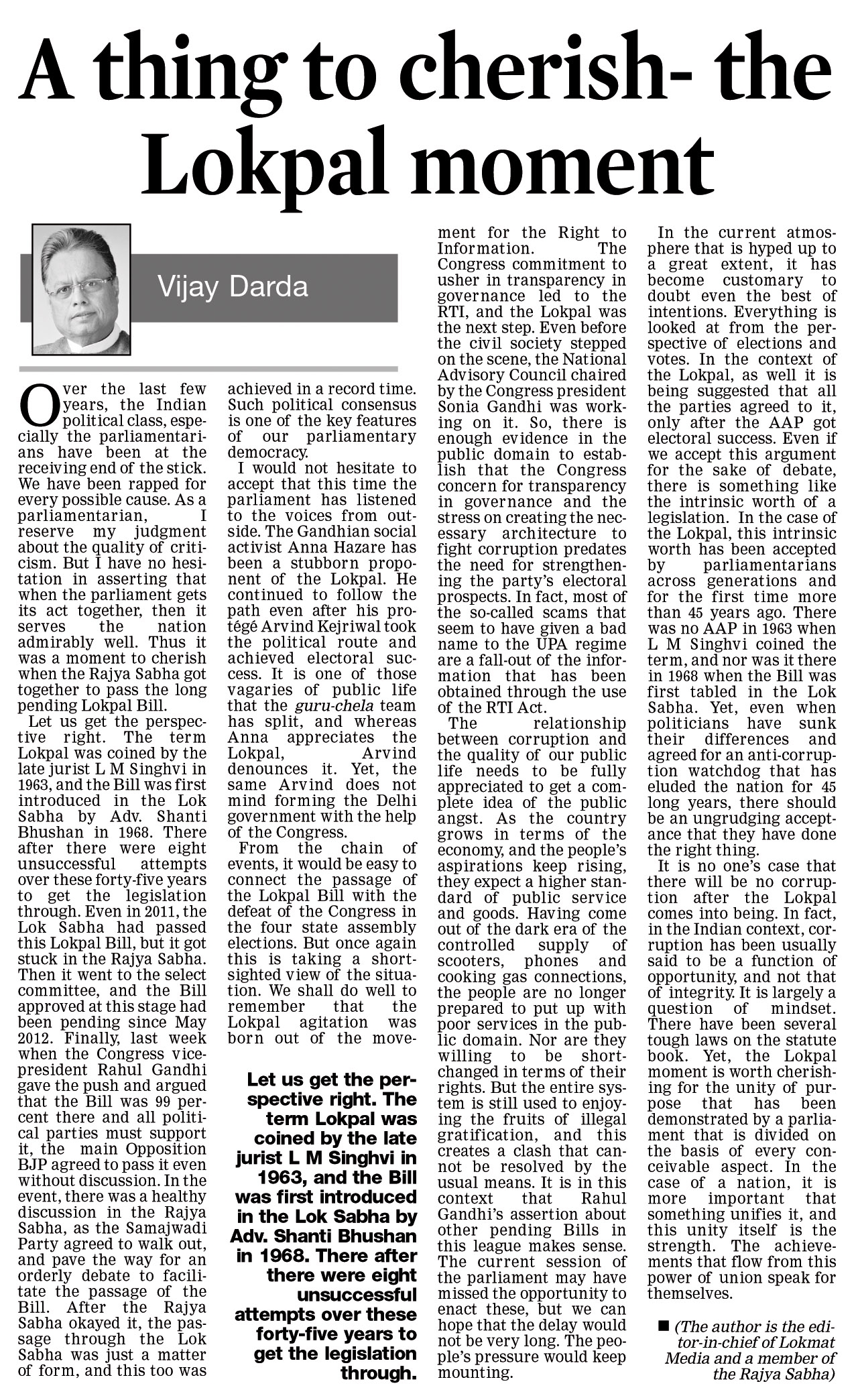 Not a mature way