Let us face it. After the Delhi assembly elections in December 2013, when the Aam Aadmi Party emerged with 28 seats as a major player it shocked politicians, media players and a lot of other know-alls. But the common people did heave a sigh of relief. There was a ray of hope that here could be the beginning of an alternative to politics as usual. They felt that now they had other options as well apart from the usual political parties. Within days, there were discussions about the kind of impact the AAP could make on the General Elections. Reflecting this mood, some voices even went to the extent of arguing that the real danger to the prime ministerial ambitions of the Gujarat chief minister Narendra Modi now comes not from the Congress, but from the AAP leader Arvind Kejriwal. This only echoed a mood that was anti-Congress, but not yet ready to accept Modi / BJP.

In the months after that the various shades and colours of the AAP, and its leadership have unfolded. It may be too early to say that the promise of December 2013 has died in March 2014, but then the signs are not even half as encouraging as they appeared at the start. The negative list is too long to enumerate, and the positives have still not moved beyond the initial promise that may be this is an alternative that could be tried.

It is also a given in the current 24×7 news environment that a political persona is enriched only by sustained exposure to media coverage. Let the news media switch someone off, and then the rapid process of fading off the public radar begins. Then the logic of out of sight, out of mind takes over. Kejriwal is essentially a creation of the media. If the Jan Lokpal agitation that had the social activist Anna Hazare as the face and Kejriwal as the organiser did not receive the kind of media attention it got, then we would not have been talking of the AAP, at this moment. Of course, the handling of the agitation by the government also left a lot to be desired, but even without that the AAP would have died even before it had been born. The saturation coverage that the Lokpal agitation got through its Jantar Mantar and Ramlila days set the foundation for the AAP. Normally, it would be expected that a media creation like Kejriwal would treat it with respect, and perhaps an element of gratitude as well.

But that expectation would betray complete ignorance of the world of realpolitik. In the real world, everything is there on a use and use basis. So, even as Kejriwal alleges that the “entire media is sold, and he will put them in jail, after coming to power”, he is actually using the media to grab attention.

Such an allegation impresses no one, and if the idea is to detract from media’s credibility it is flawed ab initio. Kejriwal is too seasoned a media manipulator and from past experience, he knows that this is just another one of his hit and run tricks. The momentum that has been generated in the past few months is enough for him to make news for the rest of the campaign period, and should it pay some electoral dividend, then everything would be forgotten. He knows that he does not have to answer the question as to who paid for the saturation coverage of the agitation. Did he pay it himself or was it paid by his masters? In our political culture, it is enough to level a wild allegation, without having the onus of proving its worth. You hog the limelight, reap the harvest, in the fond hope that something will stick.

This indeed is anarchy as strategy in operation. Kejriwal has been trying to paint everyone as black, and puts himself as clean and white by contrast. Now, there is no segment of the society that is not corrupt by his standards, without having proven anything against anyone-right from the biggest industrialist Mukesh Ambani to the lowest babu, he has dubbed everyone as corrupt. Similarly, from bureaucrats to journalists, he has called everyone ‘saleable’ and in this spectrum he has also included the media that hailed him as a saviour of the middle class.

The public mind also has a flaw. When it is enamoured of someone, it tends to overlook the obvious mistakes as well. So, no one pays much attention to Kejriwal’s words when he says that he wants to change the system. No one emphasises that when he quit the Delhi government as the chief minister, he was actually refusing to follow the constitutional process. That he wanted to free himself from the responsibility of governing the state, and let himself loose as a campaigner for elections, was seen as a great tactical move by his admirers, and they argued that he was entitled to play it. They did not bother to analyse as to why does he insist on the Jan Lokpal, even when his mentor Anna Hazare asserts that the Lokpal is a good enough beginning?

Basically, because it not just subverts, but overturns the constitutional process. Moreover, there are many who appreciate even his anarchy without bothering to assess as to what good can emerge out of any such thing? Just pause to assess as to what has been the impact of the entire Lokpal agitation on our economy? It will be clear that as if the global downturn was not enough, it has actually damaged investor confidence, and created an image of a country that is not safe enough for doing business. May be this is what Kejriwal and company have set out to achieve.

In our multi-party democracy, there is everything in favour of a new party coming on the political scene. As the people of Delhi have shown we are willing to repose our trust in a promise. The people are willing to trust an ordinary man — aam aadmi– on his face value. But then this trust has to be matched by performance. A mere hit and run strategy, or anarchy as strategy is not an alternative. 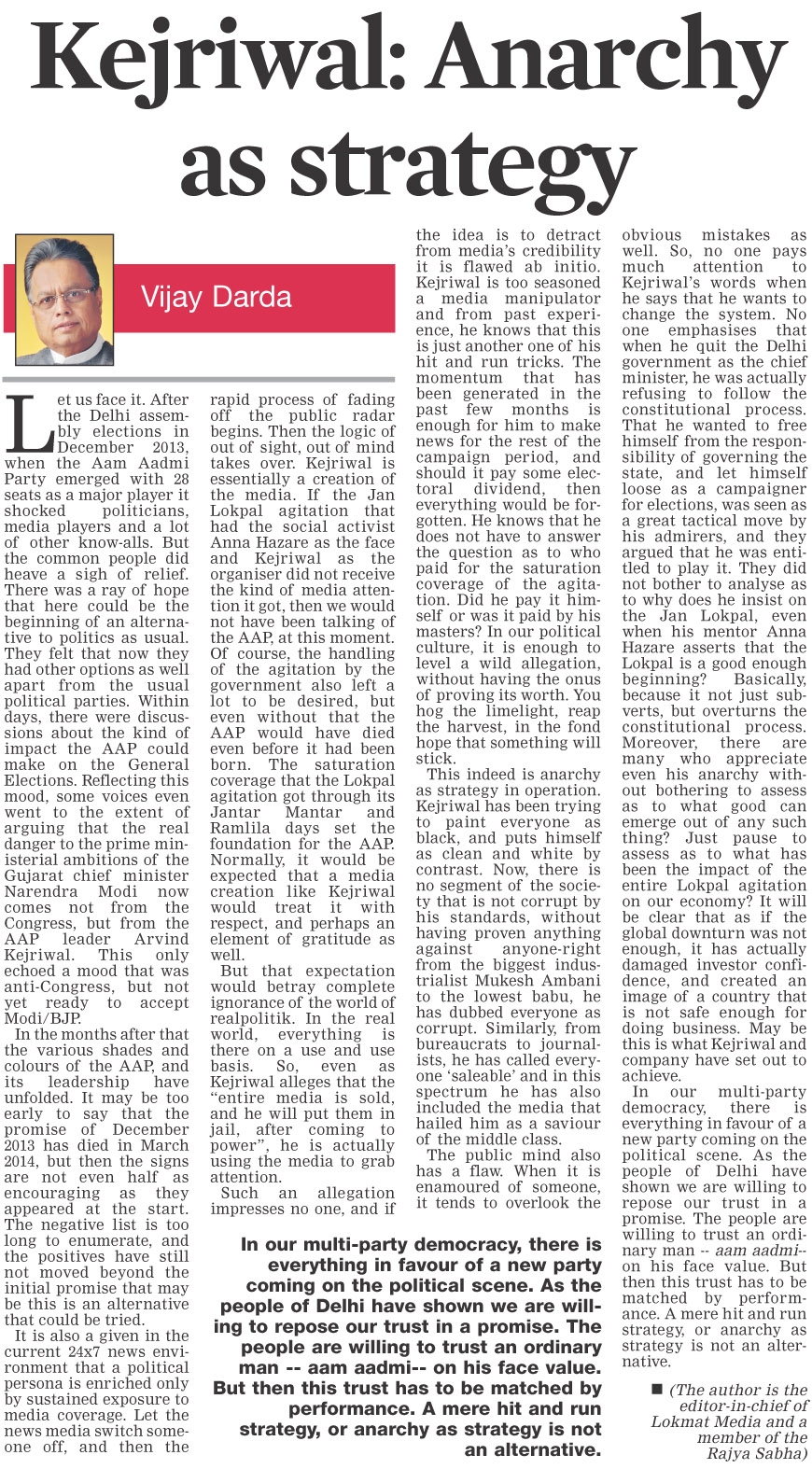