Way back in the 1980s, it was the then prime minister Rajiv Gandhi who spoke of India marching into the 21st century on the wings of information technology. The rest of the world scoffed at him. When he spoke about computers, the rest of the politicians used to argue about the negative impact they would have on the society. But now the same Information Technology revolution is an integral part of our daily lives. In fact we cannot imagine life without computers.

The parallel may not be fully justified, as these are early days as yet, but at least the hope in itself is not quite baseless. Less than a year ago, when an IIT graduate Arvind Kejriwal launched a political party the Aam Aadmi Party no one really took him seriously in the political world. At best, his outfit was seen as a spoiler in terms of electoral politics. More as an outfit that would end up with some votes in each constituency, but barely make an impact in terms of seats. But then start-ups by IITians have a way of surprising the world. This has happened in the arena of information technology and the last few weeks have seen the question being increasingly asked all over about the impact that the AAP party would make on the outcome of the 2014 general elections. Now no one is going to dismiss them lightly. They are busy crystallizing their national plans and professionals who have made their mark in their respective fields are looking-up to AAP to make a difference to politics.

India is a non-violent country. Even the end to the centuries long colonial rule came through the non-violent methods perfected by Mahatma Gandhi. But then it has not had a revolution like the French or the Russian one. We did have leaders like Jayaprakash Narayan who talked of total revolution, but then it never did fructify. Indeed, in India everything happens in the domestic context. Just as hand-spun khadi had its own connotation in the freedom struggle, home spun ideologies and contexts get their own momentum in our society. So, the AAP does not have an ideology. The classical theorists may describe them as populists and view their one week in power as an exercise in economically unsustainable populism and thus condemn them to doom, but this ignores the basic question of satisfying the people’s aspirations in a democracy.

The inadequacies of the mainstream political parties are crippling the lives of the people. True, the Congress party was summarily rejected in these recent elections, but then even in the BJP-ruled states the hunger for an AAP-like option cannot be denied. For the grim reality is that irrespective of the colour   of government in the state, the lives of the people are not very different. Their problems are the same and the approach of the state government towards their solutions varies marginally with the colour of the government. It is not for nothing that the BJP’s prime ministerial candidate Narendra Modi simply spews fire at the Congress, and seldom talks about the ‘new world’ he has ushered in Gujarat. Can he claim that his state is less exploitative of the weaker sections than the Congress? Can he argue that industrialists are not a privileged class in his state? Can he deny that his ministers have not magnified their personal wealth during their years in power? Hence, we see the husband of a powerful minister migrating to AAP. There is another former BJP MLA in the same state who has joined AAP.

So, will the AAP ride a revolution in the Lok Sabha? The answer will unfold in the coming months. This is a battle in which reputations and political careers would be felled. In terms of the verbal exchanges it is sure to get ugly. Already, the BJP in Delhi has started becoming uneasy about the AAP-Congress arrangement. It is sensing a political conspiracy, whereas at the core it is political pragmatism on both sides. In any situation, where there is a fractured mandate, it is the responsibility of diverse political formations to carve a government and ensure that there are no immediate elections. The AAP- Congress arrangement in Delhi reflects this reality. However, it would be a different story in the national elections. AAP is poised to grab the anti-Congress vote and the extent to which it succeeds would depend on the local factors. Given the fact that the BJP never seriously contested more than 280 out of the 543 Lok Sabha seats, and even on these has banked largely on anti-Congress votes, the battle could turn interesting in a three-way fight.

The other serious question is what kind of revolution will a non-ideological party really usher in? Is a commitment to a corruption free government adequate to usher in a revolution? Or is singing Dushyant Kumar’s poetry at the end of public speeches as done by Kejriwal enough to talk of a revolution? More than that is there any understanding of the kind of revolution India needs in the  21st century? Moreover how will such a revolution empower India as a domestic power as well as a global player in the emerging geo-strategic scenario?

Well, the people need the answers to these questions, and unfortunately these answers cannot be had from the people in the manner in which the AAP decided to join the government. Yogendra Yadav may be right that India needs options beyond Rahul Gandhi and Narendra Modi, but then these options have to be flesh and blood politicians, and not mere ideas. In the case of Delhi, there is always a fall back option if the AAP commits a blunder. But then should the same situation arise at the national level, the price to pay in terms of the consequential costs would be prohibitive. A nation with the size and complexities such as ours can ill afford and instability or any uncertainty when it comes to national governance. In this respect, whatever its other failings, for ten years the Congress led UPA has run a stable ship. Hence, 2014 promises to be a tough year, for the people of the country. They have the burden of making the right choice, that shall be pushed through a severe test of time. 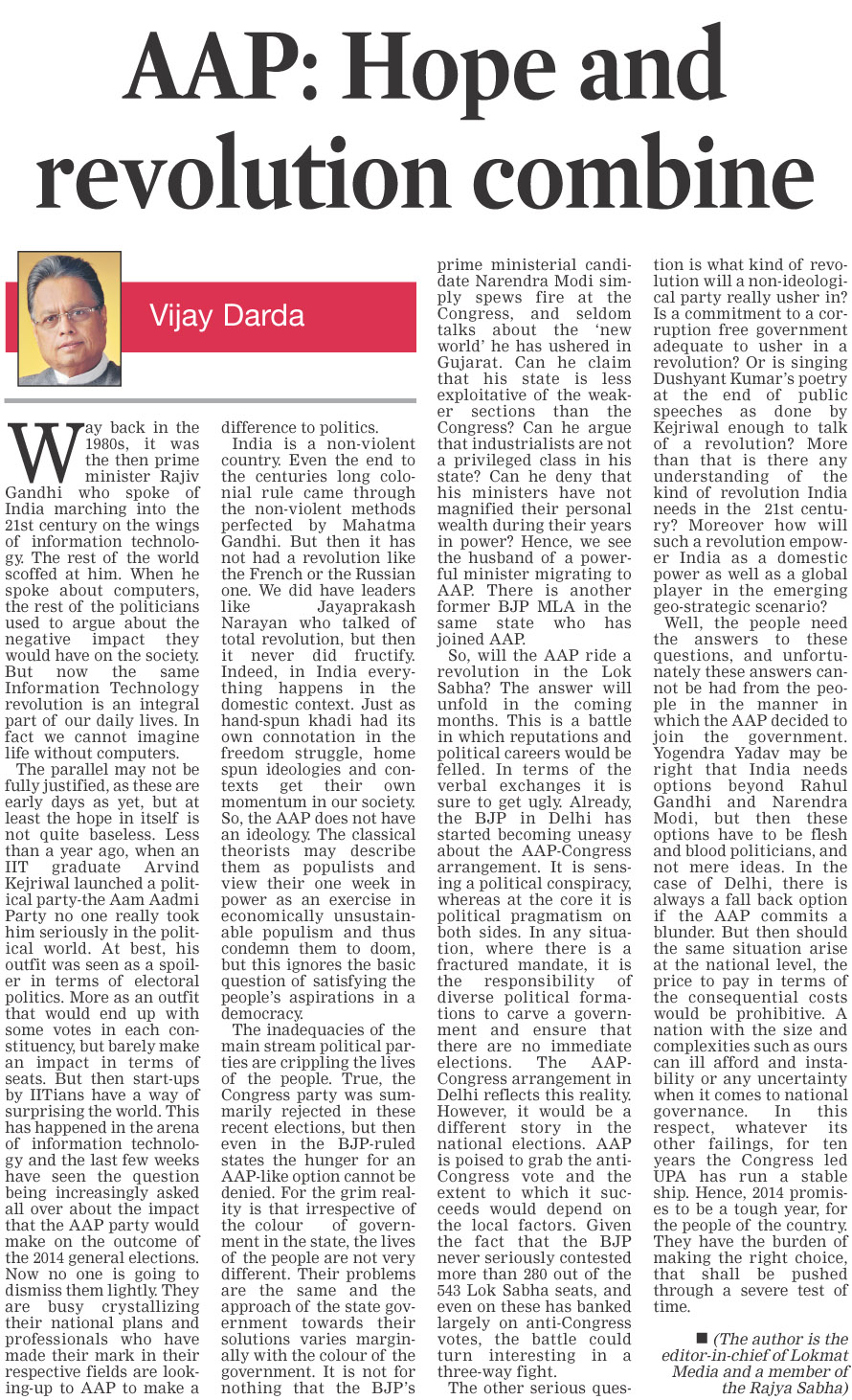