At times, it is instructive to look back at things to have an assessment of the future. For instance, three years ago no one could have foreseen the rise of a party called the Aam Aadmi Party as the main fulcrum of power in the city state of Delhi. For the simple reason that there was no AAP. But now we have a situation where the two national parties — the grand old Congress and the challenger Bharatiya Janata Party — have to simply wait and watch the next step from AAP. This has come to pass because in the people’s court the Congress got dethroned and the BJP could not capture the seat of power. It came very near to doing so, but was thwarted by AAP.

We would do well to recall that before the results were declared almost every politician and political pundit was dismissive of the AAP. The party was at best seen as a spoiler. The usual political argument was that the AAP candidates may make the difference between the victory and defeat of the main parties, but they would not be winners themselves. After all, in the past as well there have been many such third players on the electoral scene with similar results. No one came that close to power in the first election itself. Or for that matter no one from such a party upset the chief minister as well.

We would also do well to realise that the AAP victory has come after long traumatic weeks in the national capital. In the first place prices of essential commodities have been skyrocketing. Then instances of high profile crimes have been unending. Then there have been cases of corruption in high places. All this has gone on along with an impression that the government of the day is either powerless to check these or is actually colluding in all these cases. In sum, the common man has come to the inevitable conclusion that enough is enough, we cannot allow politics as usual to continue. Lest the BJP jumps to the conclusion that this disapproval of the common man is for the Congress way of governance, let it be pointed out that for the common man in this instance there is no difference between the Congress and the BJP. The voter who chose AAP could have easily opted for the BJP in Delhi if that had been the case.

So, the people have rejected both the Congress and the BJP. They have opted for AAP. The party got 28 out of the 70 seats, and in a coalition era this is a good number. Political parties with much lesser percentages of seats have cobbled successful coalitions and ran governments for five years. But for now the AAP is wary of ‘unconditional support’ from the Congress. It has valid reasons to be scared. The phenomena of ‘big fish’ devours the ‘small fish’ could be at work. However, if it has to survive and thrive in the murky and muddy waters of politics, AAP would have to make the transition of being a party of protesters to one of rulers and administrators. The longer it delays this transitory process, the faster the people’s patience would be running out. It would do well to accept that if the people who voted Sheila Dixit to be the chief minister thrice could vote her out, then how much time would they take to discard a non-performing Kejriwal?

The core message from the people is not their support for Kejriwal. It is the rejection of the Congress and the BJP. In opting for AAP candidates, who are really unknown faces, the Delhi voters banked on uncertain commodities but expressed their disgust for the politicians who kept on being engaged in politics as usual. If, we scan the results of these state assembly elections, it would indicate that sitting legislators cutting across party lines have been defeated in unprecedented numbers. Perhaps for the first time, the term anti-incumbency has become applicable to legislators belonging to the Opposition party. In Chhattisgarh, 27 out of the 36 Congress sitting legislators got defeated and in Madhya Pradesh, 40 out of the 68 sitting legislators from the Congress lost after being in Opposition for nearly 10 years.

It is time for the main parties to change the way they run their politics. For the people, the party apparatus is too smug, arrogant and virtually unapproachable. Recently Union minister Jairam Ramesh admitted that the party manifesto is written by seven people. The situation is no different in other parties. The same logic holds true for all the decision making processes. These are closed and dominated by a select few hand-picked persons. The people at large do not appreciate this practice. The AAP had manifestos for every constituency, and its offices were easily approachable.

No one is arguing that the AAP has all the answers to all our problems. Nor is it anyone’s case that the AAP route would be successful. But the primary concern is that at this stage in the process of our democratic development the aspirations of our people are rising, and these cannot be crushed. The people everywhere need better facilities, and they are not prepared to accept anything that is second best. The chalta hai and the red tape attitude that has been a part of our work culture is no longer acceptable. There may have been an earlier generation that suffered it silently. Now, if India prepares to be at least a regional super power, then its voters and citizens would not accept anything second grade. The politicians have to perform, and perform at their best. Or else they would have to move out.

Now, whether AAP succeeds in this exercise or not, and whether it makes any national impact or not is something that will be decided later on, but there is no doubt that it has churned the political process. It has created a fear of the unknown in the mind of politicians, and when it steps into the wider political arena, beyond the national capital it would carry this fear along with it. 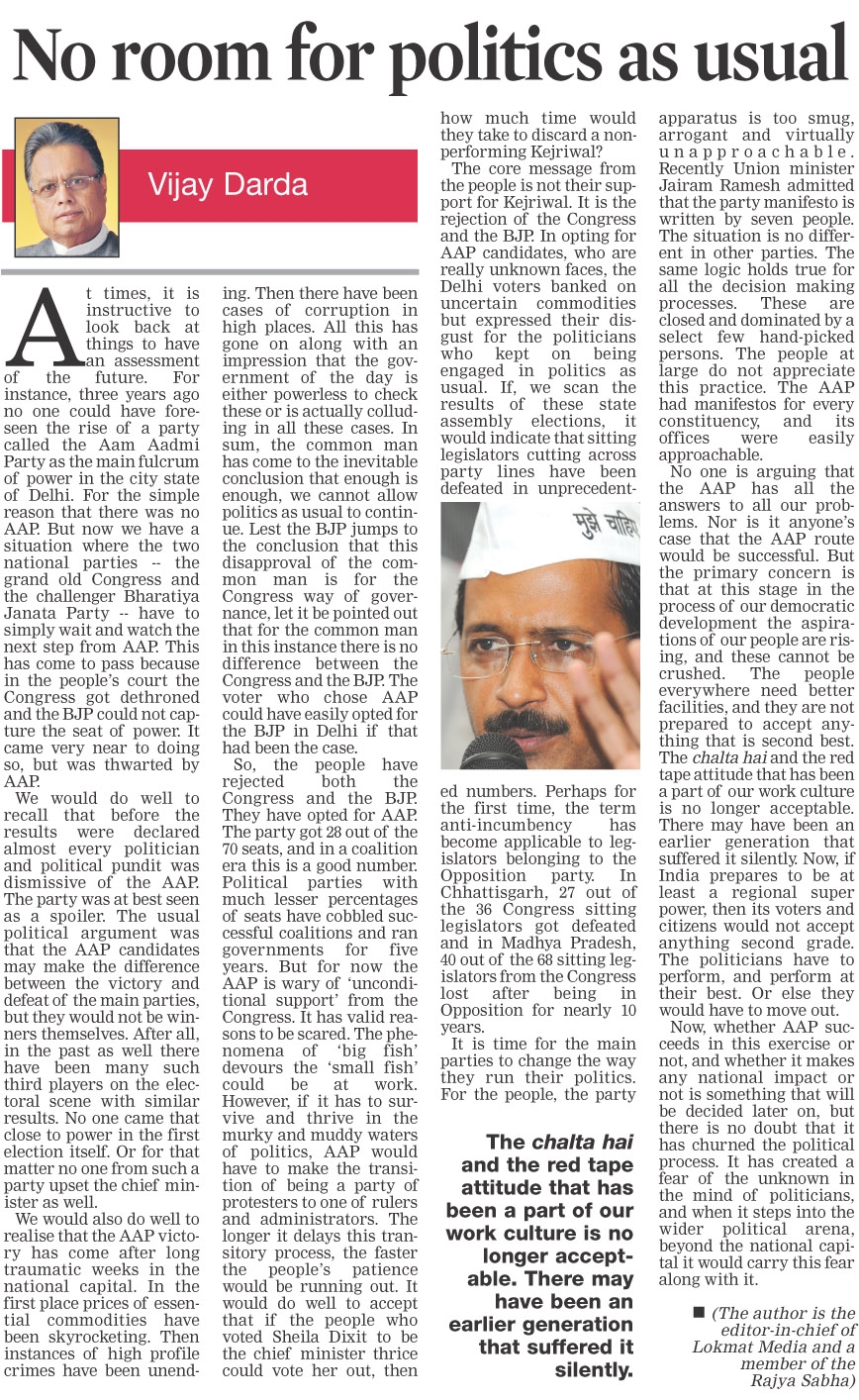 Make or break elections for all