Crucial to win taxpayers’ trust; natural justice should be ensured

Nagpur, Dec 2: The chairman of editorial board of Lokmat Media and former member of Rajya Sabha Vijay Darda exhorted the Indian Revenue Service trainee officers to act with respect and understanding towards the taxpayers and communicate in layman’s language to remove the fear of the taxman from their mind.

Addressing the IRS trainee officers at the National Academy of Direct Taxes (NADT) on Tuesday, Darda asked the officers to remove fear from the minds of the taxpayers and have a sense of respect and goodwill towards them. He further asked them to communicate with the taxpayers in simple and easy language, and ensure that the taxpayers willingly and without any pressure pay the taxes.

“Always observe the principle of natural justice. With this you can not only contribute better in nation building but also motivate the taxpayers to pay taxes,” he said.

Darda’s address was well received by the trainee officers. The principal director general (training) of NADT Ruby Srivastava and joint director and course director of 74th batch Rishi Kumar Bisen were prominently present on the occasion.

During the course of his address, Darda shared his long and rich parliamentary experiences with the trainee officers. He narrated how he asked question after question from the first day of stepping into the portals of Parliament to the last day of his tenure. He referred to the number of Bills he tabled and shared detailed information about the questions he asked in the Parliament.

Reminding the trainee officers of their duty towards the taxpayers, Darda said, “After the completion of the training here, you will be posted as assistant commissioner of Income Tax. During this period, you should always look upon the taxpayer with respect. Remember that they are not thieves and they are not like slaves of the British Empire. Always treat them well. If you do this, it will project a positive image of the taxman which will be beneficial for all.”

Explaining the importance of dialogue, Darda cited the instance of a strike in Hindustan Lever wherein lack of better communication between the management and workers had caused the strike to prolong.

Speaking further, Darda said since the faceless audit system has been implemented, it lacks natural justice. They don’t know how the tax is being levied. One officer does the auditing, the other levies taxes, and the third does something else. Many such cases have ended up in the court too. The court has also commented on these matters. This system is good but it has been skewed badly. When something good is skewed, it gets misused. That is why it should be studied thoroughly and only then it should be used.

Since the tax department has got the technology, they should use it effectively, Darda said. “You have full access to the entire data. It just needs to be studied. If there are disputes, time is wasted and it also adds to the workload. The transition from dispute to dialogue is a good thing. When the disputes are less, better work can be done. We have seen that in the case of Vodafone when they were taxed `20,000 crore.

The Parliament had to pass an Act to deal with it. In case of CARE also, a tax of `8,000 crore was imposed. Now they will have to pay it after the order of the court. While taking any decision, there should be no discrimination on the grounds of colour, caste and political affiliations.”

Darda also shared the mantra of success with the trainee officers. He said, “Whenever there is confusion, or anger overwhelms you, you should not take any decision. It can do you more harm. Always maintain a positive spirit.”

The insightful address was followed by a question-answer session wherein the trainee officers posed many queries to Vijay Darda.

It’ll be easier to work if…
Vijay Darda said the trainee officers, during the training, will visit many national level institutes. “But you should visit private institutions and organisations too to know what pressure is, how work is done under pressure and what the problems are in paying taxes? After knowing these problems, it will be easier for you to work.” He also invited the trainee officers to visit the office of Lokmat Media. “If you visit and study, you will realise the kind of pressure we work in. What is the pressure of news coming in continuously,” he said, adding that this experience will be beneficial for them.

‘My father instilled virtue of speaking frankly, fearlessly’
Darda said as a member of Rajya Sabha, he fearlessly expressed his opinions and viewpoints. He learnt this ‘sanskar’ of fearlessness from his father, veteran freedom fighter Jawaharlal Darda, he said.

Walking down the memory lane, he said during the pre-independence era, Babuji was lodged in Jabalpur jail as he participated in the freedom struggle. At that time, his grandmother was on death bed. His uncle went to the then district magistrate and requested him to release his father. However, the district magistrate set a condition for his release saying that if he tenders a written apology, he will be released. However, Babuji refused to tender the apology! 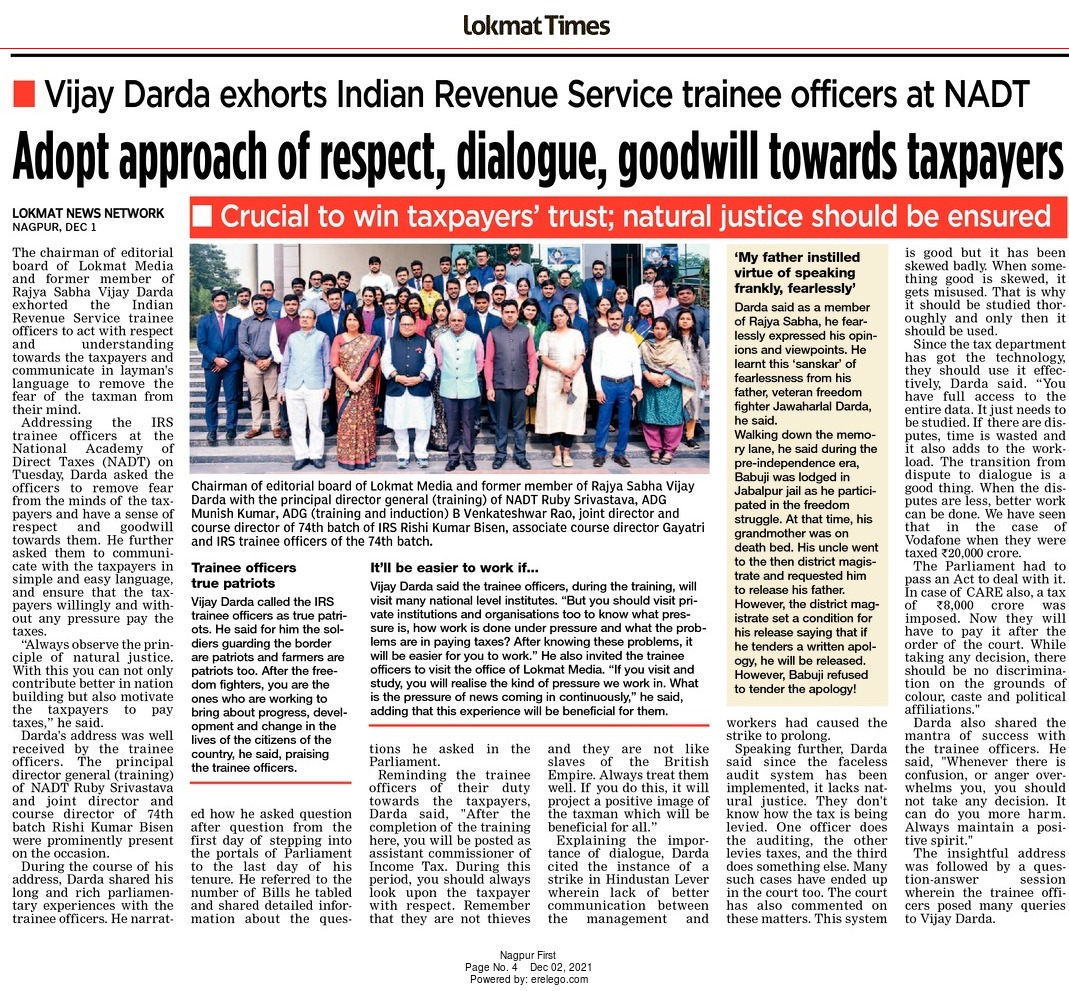 Why do officers & leaders want to look different?