One can easily comprehend the sense of self-congratulation that prevails in the RSS-BJP after they have nominated the Gujarat chief minister Narendra Modi as their prime ministerial candidate for the 2014 general elections. Ever since Modi was appointed the chairman of the party’s national campaign committee in Goa, this decision was on the cards. True, the party’s senior patriarch Lal Krishna Advani has some valid objections over the timing of this decision, but then the BJP-RSS combine had to overcome this psychological barrier. They could not be seen as a combine that cannot take a decision. More so when they wanted to project Modi as a strong and decisive man, and they were looking weak and indecisive.

Any decision has its pluses and minuses, but in favour of the BJP-RSS clan it can be said that the balance was tilted in Modi’s direction. He is a divisive and polarising figure, but then he represents the essential character of the saffron parivar. In his polarising and divisive role, he is a mirror image of this parivar. So, this criticism of Modi’s persona did not cut much ice with the wise decision makers. They went ahead with it. They simply had no other option.

In his essence Modi is the RSS man who symbolises Madhavrao Sadashivrao alias Guruji Golwalkar’s ethos that the Muslims have to live in this country as second class citizens, and if possible not even have voting rights. When he talks of the Gujarat model of growth this is what he intends to convey, and when he persistently refuses to show any signs of regrets for the post-Godhra 2002 Gujarat riots, this is his hard core message. Loosely interpreted, this is the political version of the RSS dream of Hindu rashtra, and for the ordinary souls who suffer because of such illusions this is the concept of India as a Hindu Pakistan.

Let us accept that this is the RSS dream and if Modi has been backed to the hilt by the RSS against Advani it is because of the realisation and acceptance that the senior patriarch has failed to deliver this political dream to the RSS and now it believes that there is no other option for it other than Modi. True there are other leaders, but then they lack Modi’s branding as the Hindutva icon.

Now, the differences between Advani and the RSS are not just over the nuances of timing etc. They are much more basic. Advani the pragmatic politician has learnt it over the years that you cannot dislodge a Congress government in this country without building a broad based anti-Congress coalition. Whether you like it or not this is the basic political maths of the electoral arena. They realised the limitations of going alone in 1996 when Vajpayee had his 13- day stint as the prime minister. No other party was willing to support the BJP, and the government had to go. Hence Advani’s insistence on the need to build coalitions.

Now, contrast this with the RSS attitude that pushes for Modi even when the BJP has lost its most dependable ally of 17 years the Janata Dal (U). Simply put, for the RSS the Hindutva agenda is more important than the anti-Congressism of Advani. In the process an anti-Congress coalition be damned.

The pro-RSS pro-Modi lobby argues that Modi’s polarising persona will have a multiplier effect on the electoral scene. They have rammed the idea down the throat of the BJP dissenters that repeating his successes in Gujarat, Modi would catapult the BJP alone to capture more than 225 seats in the Lok Sabha and the allies would come rushing to install Modi as the prime minister. They argue that the mood of the country is anti-Congress and Modi would galvanise it by his charismatic personality and acidic oratory. He simply spits venom against the Gandhi family and that works, they argue. Once again though there is no basis for an independent observer to believe that this kind of Modi magic would work as the BJP never contests more than 270 seats on its own, still the fact remains that the BJP leaders have no option but to go along with this scenario.

Within his band of already converted followers, we must accept that there is a streak among the chattering middle classes of urban areas, who without realising its full implications crave for some kind of a dictatorship in the foolish hope that it would substitute order for the present democratic chaos. There is a lot of consolation that the corporate sector stands by Modi. Much of the media perception as the knight on the white horse who has come to rescue the economy is built on the strength of this corporate support. But then for that to happen, the pain has to last for at least another nine months and may be that time the economy would be beyond redemption.

Mercifully for the country and the Congress party there is the advantage of a sober and sensible leadership in the Congress party. Under the astute leadership of Sonia Gandhi the party for over the last 15 years has demonstrated the kind of political maturity that has insulated itself from the daily mood swings of the political scene. The media and the political class have been straining every nerve to build a Modi versus Rahul Gandhi contest. This is imply churlish. In the first place, India is not a presidential form of a democracy, and in the second, unlike the BJP-RSS that have no option but to put all the eggs in the Modi basket. The Congress has the ability and option of a broad based collective leadership. It should not be forgotten that the apolitical looking combine – Manmohan-Sonia – has come up trumps twice, and that too without making even the slightest noise about their prime ministerial ambitions as compared to the song and dance that goes on about Modi’s mere nomination as the prime ministerial aspirant.

Interestingly, before the battle for 2014 is earnestly joined we have the semi-final round in November 2013 that would take place in the BJP strongholds of Madhya Pradesh, Chhattisgarh as well as the regions it hopes to get back from Congress – Rajasthan and Delhi – and this would give a foretaste of things to come. The important thing is will the magic invested in Modi by his crowd of converts impress the unbelievers? 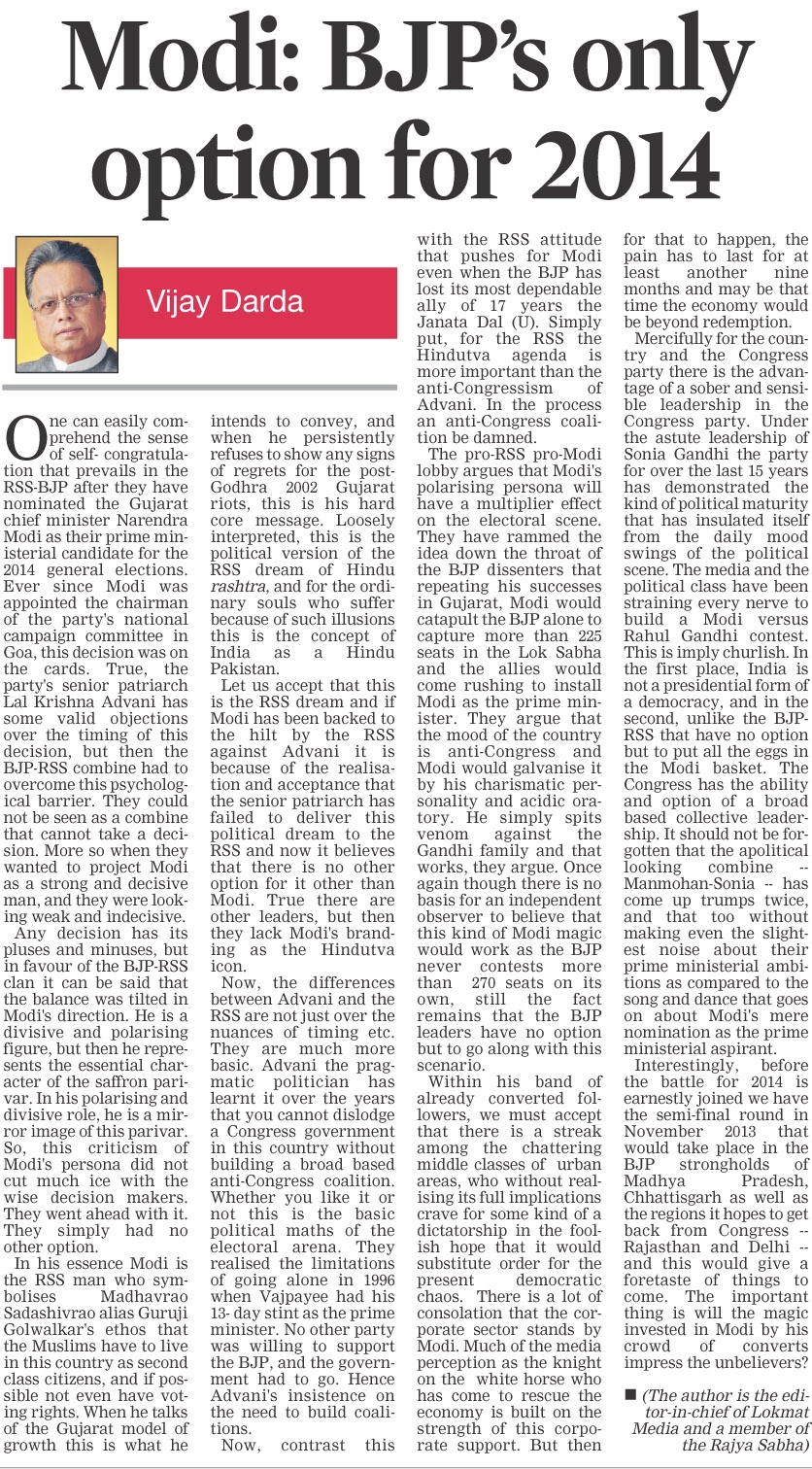