Another chance for Pakistan to mend fences with India

Despite umpteen ceasefire agreements, Pakistan continues to provoke us

This is not the first time that India and Pakistan have signed a ceasefire agreement on their borders to give peace a chance. After the fierce Kargil War of 1999, there was peace on the border for sometime, but it was short-lived. By 2003, when the situation went from bad to worse, a ceasefire agreement was reached between the two countries. Now, India and Pakistan’s Director Generals of Military Operations have agreed to fully implement the ceasefire understanding of 2003 in letter and spirit and to ensure that the ceasefire agreement will not be violated by both the sides and peace will be restored along the border from Rajasthan to Kashmir! Will it really happen?

The world rests on hope and it reinforces trust. Therefore, the supporters of peace should hope for peace and efforts should be continued for achieving this objective. However, the 2003 ceasefire agreement also did not last long and in 2018 a similar agreement had to be reached once again. Interestingly, within the next three years, a ceasefire agreement has had to be signed again. The question is, once the agreement is reached why is it violated? Blame lies at the door of Pakistan. Our army does not fire needlessly. Our army responds when Pakistani army fires bullets and lobs mortars at innocent villagers or its snipers fire at our jawans.

This is indeed an act of noble-mindedness on the part of India that it has agreed for the latest ceasefire with its recalcitrant neighbour. Pakistan always tries to spoil the relationship. When India responds, it starts propaganda about the Kashmir issue around the world. Right now that its condition is bad, it wants to get some relief at the border because our army has kept a tight vigil over the region. Seeing the retreat of the Chinese army, the Pakistani establishment is feeling demoralised. Since India has always been in favour of peace, it is giving one more chance to Pakistan to mend its ways.

I also want to mention that the people of Pakistan also want good relations with India. The problem is their army. Enmity with India is its staple diet. Given that relations between India and Pakistan have reached such a nadir, the question in everyone’s mind is what drove Pakistan to opt for this ceasefire agreement?

In a significant shift of tone, Pakistan Army chief General Qamar Javed Bajwa seemed to have softened his approach towards India on February 2 when he announced that, “The time has come to extend a hand of peace and friendship in all directions.”

Consequent upon this statement, the firings from across the border have started to decrease. India replied in the affirmative to this gesture. Even Pakistan Prime Minister Imran Khan’s aircraft on the way to Sri Lanka was allowed to pass through the Indian airspace, whereas Pakistan’s attitude has always been negative. Even our Prime Minister Narendra Modi’s aircraft was not allowed to pass through Pakistani airspace. India would have given a befitting reply but it was not done because India wants to improve relations with its neighbouring country.

An effort to restore peace was also made by the then Prime Minister of India Atal Bihari Vajpayee but Pakistan responded with the Kargil War. By the way, Prime Minister Narendra Modi has always been in favour of the fact that relations with Pakistan should be normal. After the 2008 Mumbai bomb blasts, all relations were frozen but in 2015, Narendra Modi broke the ice by paying a surprise visit to Pakistan and meeting the then Prime Minister Nawaz Sharif at his residence. Perhaps Nawaz Sharif also wanted to normalise relations, but a few days later there was a terrorist attack on the Pathankot air base. Pakistani terrorists were involved in it, which the army there had trained and radicalised them for this terror attack. When Imran Khan became the Prime Minister, he also tried to thaw the frozen relationship, but the army took him under its wings. Pakistan keeps sending consignments of arms and ammunition for terrorists in the Kashmir Valley. It should be kept in mind that those who play the game of blood are the enemies of democracy and the misfortune is that many invisible hands are always active to aid and abet those who do so.

Whatever may be the reason for the ceasefire agreement, it cannot be denied that peace on the border is very vital for both the countries. If the daily skirmishes on the borders cease and the relationship between the two nations becomes normal, then peace and harmony will prevail which will be beneficial for both of them. If there is peace and mutual understanding, it will surely be good for the people on both the sides. Both the countries are spending crores of rupees on war preparations. The amount of expenditure incurred by Pakistan is not known, but India spends about Rs 7 crores every day to maintain its troops on the peaks of Siachen Glacier. Pakistan is on the lower peaks there, so it may be spending less but that amount will also run into crores.

Apart from this, huge expenditure is also incurred in guarding the borderline of about 2900 km. Just think how good it will be if this money is spent on basic needs like health services and education for the common people! If that country gives up the path of terrorism, it will stand to gain immensely. We are a strong country, we are eliminating terrorists and we will destroy them root and branch. Pakistan should not even try to dream of snatching Kashmir. It has got an opportunity now to mend its ways and improve relations with India. The ball is in Pakistan’s court now. 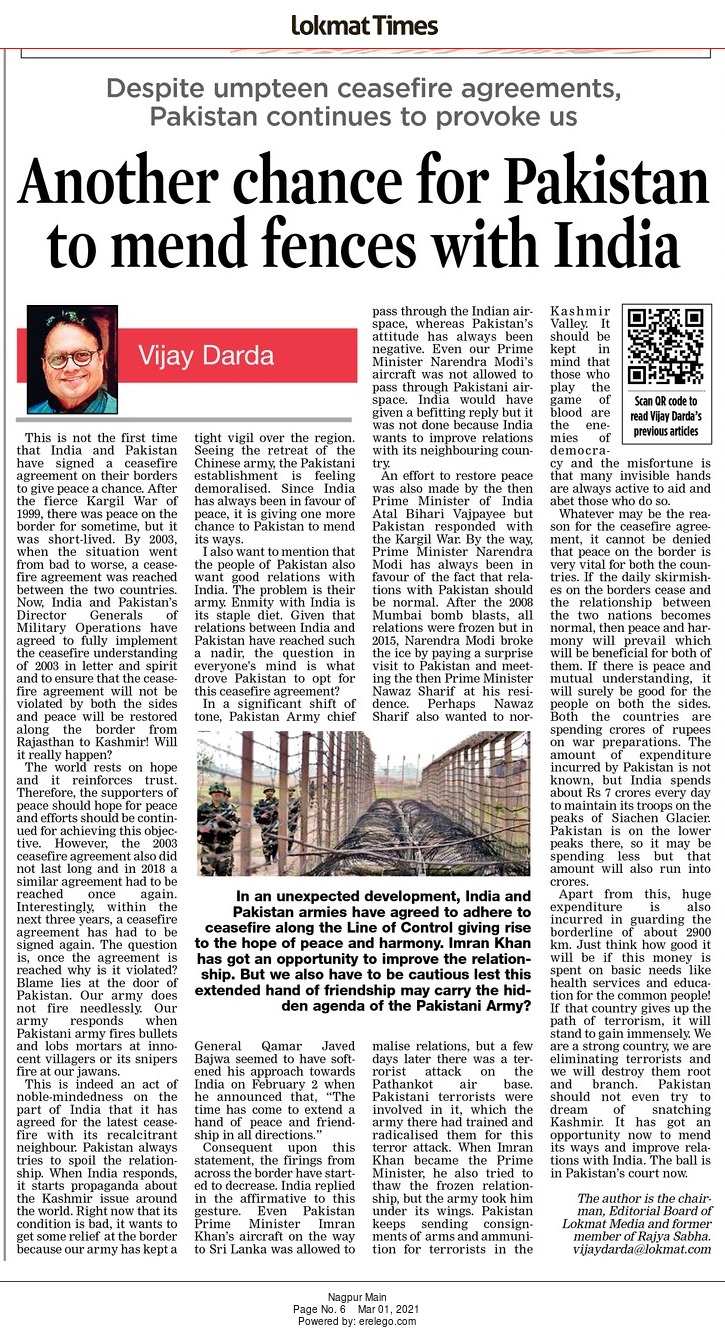