These are testing times for the Indian polity.  It is under fire from every possible quarter. The judiciary seldom misses an opportunity to slam politicians; the media enjoys bashing politicians of all shades. To top it all, the rival political parties are engaged in bitter contests that transcend all limits of decency. For them, nothing is sacrosanct and above politics. It is in this backdrop that the verdict from the people of Karnataka for the state assembly should be seen as a time for some humility across the political spectrum.

For quite some time we have been witnessing in the parliament and outside it an almost frenzied approach by the Opposition parties and the media on issues related to corruption. It is nobody’s case that such issues should be brushed aside. But there should be some sense of proportion. Indeed, if the BJP had any sense of humility then after the Karnataka verdict, that saw their first state government in southern India voted out, at least it should have shown the decency not to disrupt the parliament on an issue of corruption where nothing had been established conclusively.

Insofar as the Karnataka verdict is concerned those who are surprised by it have only themselves to blame. The BJP’s first government south of Vindhyas was actually formed in sin. As it happened, in 2008, it got just 108 seats of the 224, and was short of the half-way mark, leave alone a comfortable majority. Then, it was funded by the ill-gotten wealth of the Bellary Reddys, and in an operation that was aptly named as “Operation Lotus”, the majority in the assembly was manufactured at a huge cost. Insiders placed the going rate at ` 30 crores per legislator, and that was not debated in political circles. Once the BJP brass sitting in Delhi okayed this approach, it was just a matter of time, before they found themselves helpless in the face of misdemeanours by the much maligned B S Yeddyurappa.  So, there was a dichotomy. In Delhi, the BJP cried hoarse about corruption, and in Bengaluru its leaders blessed a corrupt government.

Here a foot note in terms of historical reference would be in order. After the 2008 elections, the result was poised in a delicately interesting manner. The BJP got 108, the Congress 80, and the JD(S) 28. The two sides were thus equal and the JD(S) was desperate for a tie-up and also promised the support of the ‘independents’ but the Congress rejected the idea. Essentially, this would have been an untenable arrangement, and the Congress leadership was patient enough to let the BJP have a shot at governance. In hindsight they have been justified, as now they have a government of their own.

Thus the defeat of the BJP in these elections was a foregone result. For the Congress, the only point of interest was as to whether it shall cross the half-way mark on its own, or would have to depend on others to form the government. It is here that the collective wisdom of the electorate operated in its fullest measure. The people had seen the traumatic times when the JD(S) — now on an equal footing with the BJP — had played havoc with governance first in alliance with the Congress, and then the BJP. So, even as it committed avoidable strategic mistakes, the Congress got past the half way mark. The electorate deserves a big thank you for reposing its faith in the Congress party, and there are sound reasons for their trusting the grand old party.

But then a heavy dose of humility would also be in order for the Congress. The voters have rejected the BJP’s governance pattern, and also in some places, its right wing Hindu vigilante tactics. They have placed their faith in the Congress, in the hope that under the leadership of the Congress president Sonia Gandhi, and the young vice-president Rahul Gandhi, the state leaders would not run berserk as the BJP satraps did in the last five years. Similarly, it would be too hasty to draw conclusions that this victory has set the path for the future, and the Congress would be winning all the elections.

The reality is that every election is a different ball game. And there can be no general conclusions drawn from one result. Surely, there is a lot that has gone wrong in the handling of the affairs at the Central government level, and in the states, and there are issues that need to be addressed. Given the current political scenario, the Congress can be optimistic about a good show in the coming months, but then an over-confident and complacent approach would extract its own price.

As a spin-off from this electoral verdict, there is the issue of the Gujarat chief minister Narendra Modi’s role as a star campaigner for the BJP and its potential prime ministerial candidate for the 2014 general elections. It would be in order if the Karnataka verdict and the Modi issue are seen as two separate elements. Firstly, the BJP had messed up its affairs to such an extent that no one could have helped it. This explained Modi’s reluctance to plunge into the extensive depths of the campaign. But then the bigger problem for Modi is that even in the areas where he campaigned the party’s fortunes did not improve at all. But from an overall perspective, Modi as prime ministerial candidate is an overblown media exercise. In our Westminster style parliamentary democracy, a single campaigner seldom makes such an over-arching impact.

With the state in the bag, the tough task now begins for the Congress leadership in Karnataka. They have to get their act together and deliver as a team. The people have shown that they are a demanding lot, and would be quite unforgiving when it is judgement time after five years. In this sense, it is in order that instead of being buoyed by the euphoria of this well-earned victory, the state leadership in all humility delivers all that it has promised to the people.

The most satisfying fact is that Karnataka has got in K. Siddaramaiah a clean and efficient person as the chief minister. He must be allowed to select a good team that will fulfil the aspirations of the people. After five years, it must be remembered that the people do not forgive and that should guide the state government to work for the betterment of the people. 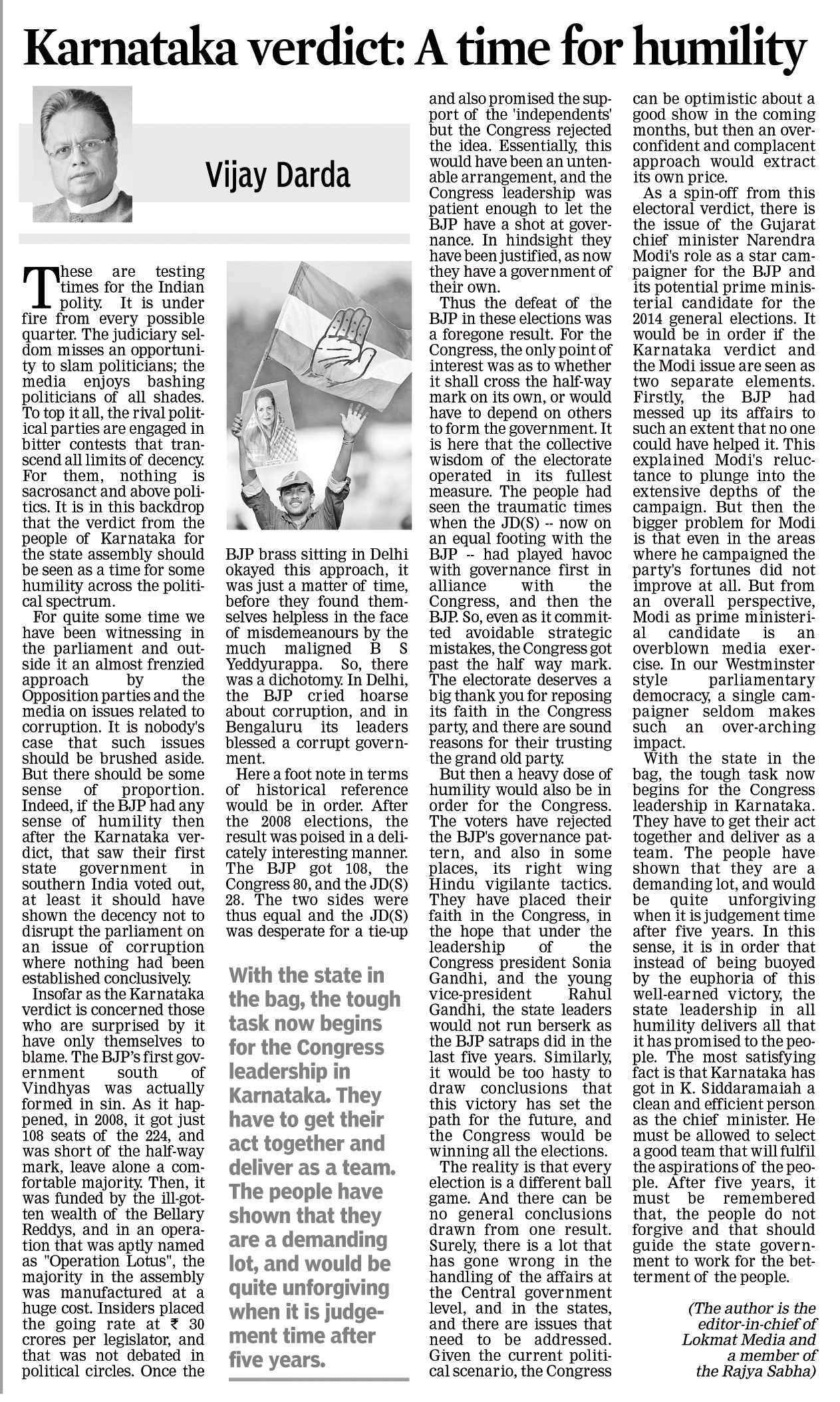 Keep elections out of mud-slinging